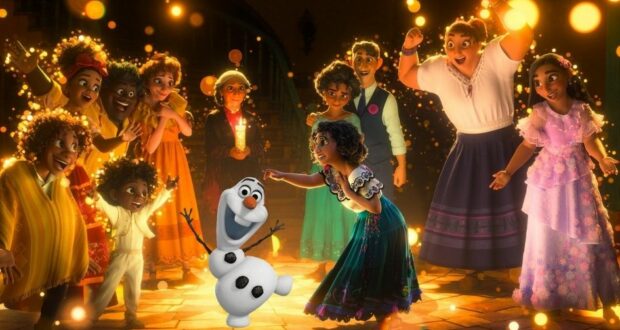 Does EPCOT Need an ‘Encanto’ Ride? Josh Gad Thinks So

Disney’s newest animated film, Encanto, is what all the buzz is about these days! The stunning, colorful movie is currently on Disney+ and it’s no secret it’s receiving much praise from Disney fans. But, is the movie good enough to be worthy of an Encanto attraction in EPCOT? Josh Gad believes so!

Disney’s Encanto has won a Golden Globe for Best Animated Feature and passed up Disney’s Frozen‘s music by topping billboard charts. It has led to the beauty of children seeing themselves in the diversity of the characters including a little boy that thought he was Antonio and a little girl that believes she is Mirabel. Even an adult woman found herself finally feeling relatable to Luisa Madriga’s strong character.

Now, the famous voice actor for Olaf in Disney’s Frozen wants to see Encanto arrive at Walt Disney World in ride form! @joshgad took to Twitter to share, “As we watch for the thousandth time, my kids and I decided we want a Colombia attraction at #EPCOT with a full #Encanto ride through attraction. @Lin_Manuel, @thejaredbush, @ByronPHoward, and @DisneyParks please make this happen. Sincerely, the Gads.”

While there has been much debate among Disney fans on if, when, and what EPCOT Pavilion should be added to the Theme Park’s World Showcase, Disney has yet to release any indication of a 12th country in the works. Currently, the World Showcase consists of 11 Pavilions including Mexico, Norway, China, Germany, Italy, United States, Japan, Morocco, France, United Kingdom, and Canada.

Could Olaf (AKA Josh Gad) be right? Well, it wasn’t too long ago we saw the success of Frozen take over Norway’s Pavilion attraction (RIP Maelstrom) with the cute boat ride, Frozen Ever After.

With Josh Gad’s tweet, the comments are flooding in! Fans are voting for a Colombia Pavilion that would hold an Encanto attraction. Some fans have even commented with the thoughts of having a Casita Restaurant (the Madrigal Family’s magical home).

What are your thoughts? Would you be interested in an EPCOT Colombia Pavilion to house an Encanto attraction? Let us know in the comments.