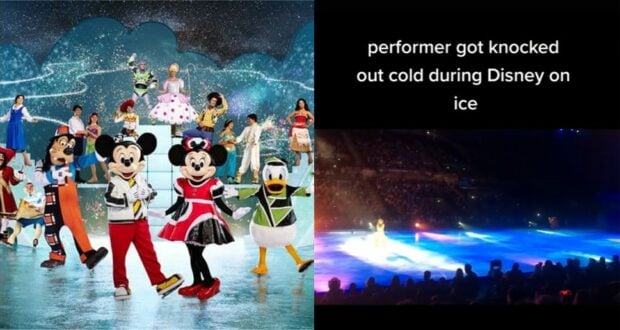 We’ve seen a fair share of viral videos when it comes to Disney. With so many fans in attendance at the various Disney events, mishaps are often caught on camera which then tends to go viral on social media. This hard-to-watch Disney On Ice incident is just that.

Disney On Ice is back to the ice and wowing fans with impressive skating skills, music, and performances. In this one viral video, we see during The Lion King‘s “Circle of Life” song, two performers attempt a dangerous move. The incident doesn’t go as planned and the performer seemingly gets knocked out.

Take note that there is also a follow-up video of another Disney On Ice performance where the same incident seemed to occur.

@nabiscooreo took to TikTok to share a video with the notation “performer got knocked out cold during Disney on ice”, along with the comment “posting this again hoping someone will do something about this …. they should not be allowed to do this move anymore.” The video below now has 4.5 million views and counting:

The video above shows the performer being lifted up off the ice by the partner performer. Another video however shows that this isn’t the first time this incident has occurred. The video below is of a different Disney On Ice show that had a similar incident take place, but this time the perform was able to get up on her own:

Comments on the videos are those such as, “That stunt is illegal even in the Olympics so why are we letting a subpar skater do it for Disney? Especially since he’s messed up multiple times.” Another comment notes, “The fact that the performance wasn’t immediately stopped to help that person enrages me.”

Do you think this act should be pulled from Disney On Ice? Let us know in the comments.