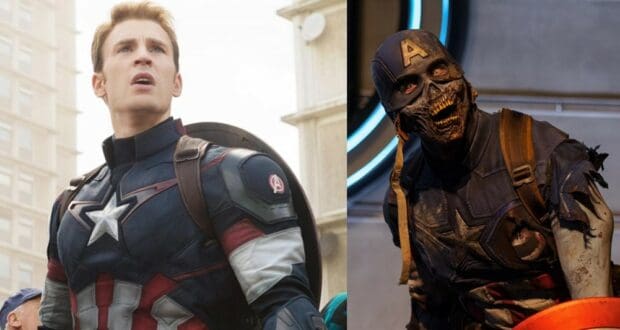 Disney Has Turned Captain America Into A Zombie & The Videos Are Creepy!

You just never know what surprise Disney is going to share next! While on the Walt Disney World Resort side of things Guests are experiencing Magic Kingdom’s Disney After Hours Boo Bash with sweetly dressed characters and the usual enticing, seasonal treats… Disneyland is dropping a shocking character into their seasonal mix! Move over Mickey and Minnie, the Captain has arrived. But, this isn’t just the normal Captain America we all know and love. Nope – Disneyland has rolled out “Zombie Captain America” and we’re honestly not sure how to feel about it!

At first, we thought – no, someone is joking and really good with costumes and editing photos. But, then Disney Parks took to TikTok to share a brief video that had us shocked. Disney noted, “That’s America’s Zombie” with the following video:

Oh my goodness! That “crunch” sound gives us goosebumps! Disney Parks then noted in the comments, “If you have tickets to the last few nights of Oogie Boogie Bash – A Disney Halloween Party, you may spot this new Villain.” This isn’t the first time Disneyland surprised us with new Villains. They recently released another creepy video introducing Sid from Toy Story, Cruella, and Agatha from WandaVision for Disney Villains for the Oogie Boogie Bash. Check out the close-up photos below of Zombie Captain America!

Yikes! Ok, what do you think, Disney and Marvel fans? Part of us is so impressed and absolutely LOVES Zombie Captain America. He’s one of our favorite superheroes and seeing him in a creepy way is somehow intriguing and we’d definitely try to get a selfie with him! On the other hand, it’s the Captain! It’s almost TOO strange seeing him in Zombie form. It seems like we aren’t the only ones that are torn, as comments about Zombie Captain America are either really for it or really against it. @AZuspan tweets, “Nope. Not how I want to see Cap.” @SofiRyanxoxo tweets, “This is terrifying. Shame on Disney. Oogie Boogie is not horror nights.” @giraffesNtikka tweets, “oh that’s upsetting but kinda neat Disney going a bit dark in the Park”. @FilmDre tweets, “This is so sick. Zombie Cap should be a new Halloween trend.”

Want to see this Marvel Zombie in person? Unfortunately, the remaining Oogie Boogie Bash party nights are sold out at Disneyland. If you don’t already have a ticket to one of the remaining Oogie Boogie nights, you’ll only be able to see photos and videos posted of Zombie Captain America on social media. What are your thoughts? Zombie Captain America – impressive or has Disney gone too far?