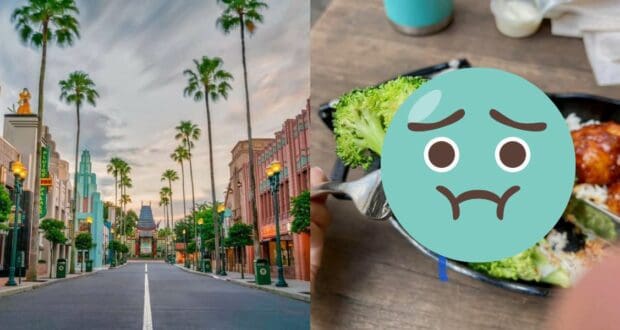 A Disney Park Guest was in for a surprise while enjoying a meal at Walt Disney World Resort. She spotted a large bug in the middle of her meal.

Walt Disney World is known for its tremendous dining options. Whether you’re dining at Magic Kingdom, EPCOT, Disney’s Hollywood Studios, Disney’s Animal Kingdom, Disney Springs, or one of the many Disney Resort Hotels, there is never a reason to go hungry.

But, what one Guest spotted in her meal while eating at the theme park was the last thing any fan would expect from Disney’s paramount dining offerings.

Nicky McCrystal Farenga took to social media to share, “Note to self: always check your veggies carefully before you eat them, even at Disney. Seriously, I don’t usually check and have probably eaten hundreds of bugs throughout my life.”

As pictured below, Nickey spotted this huge bug hanging out in the middle of her broccoli:

Nicky told us that the food pictured was a meal she ordered on December 14, 2022, at Docking Bay 7 Food and Cargo, a quick-service restaurant located in the Star Wars: Galaxy’s Edge area of Disney’s Hollywood Studios.

She further goes on to note, “It really didn’t bother me. I know it’s normal when it comes to veggies.”

But, Nicky does share that it still surprised her, stating, “Kind of scared me as I don’t usually notice or look for that type of thing. I don’t know what made me look this time but I’m glad I did.”

The comments to the post are that of disgust and satire, as people link the maggot to the iconic Disney animated film, The Lion King (1994), and the scene when Simba eats his first bug and says, “Slimy, yet satisfying.”

RELATED: Guest Disgusted, Got Way More Than She Bargained for at Morimoto Asia

Disney fans go on to note, “Although it’s a “maggot” it’s a beneficial insect,” as well as pointing out that “It’s protein!!! Can’t taste it anyhow!” More joke, “I knew there was a reason not to eat broccoli.”

If you’ve never eaten at Docking Bay 7, typically, it receives decent reviews for a quick-service restaurant. Disney describes the restaurant with, “Prepare Your Tastebuds for Takeoff:”

At this restaurant housed in a working hangar bay, choose from a variety of dishes prepared with ingredients from across the galaxy—all of it delicious, but none of it familiar. Chef Strono “Cookie” Tuggs has docked a food freighter loaded with fresh supplies and he’s ready to satisfy the appetites of visitors and locals alike with an array of exotic offerings. His planet-hopping travels allow him to prepare fare with unusual flavors that delight customers.

Once you’ve got your grub, sit inside the spacious hanger, or grab a table in the rustic outdoor seating area surrounded by the crumbling walls of the old marketplace.

Interestingly enough… did you catch that “once you’ve got your GRUB…” in the restaurant description? Be sure to check your veggies, Disney fans!

2022-12-15
Jamie Sylvester
Previous: Why You Should Honeymoon at Walt Disney World Resort
Next: Indefinite Ride Closure Ahead at Disney’s Animal Kingdom