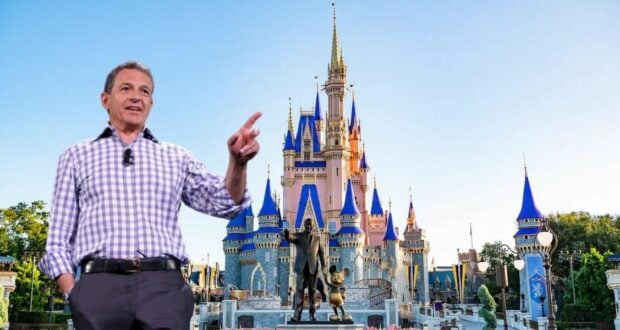 The former Disney CEO, Bob Chapek, is out. Fired from The Walt Disney Company in November 2022, Chapek’s predecessor and former CEO titan, Bob Iger, is back in an attempt to clean up Chapek’s mess. And in a new email to Disney Cast Members, Iger is continuing the company’s reorganization.

The recently returned Disney CEO Bob Iger took the helm a couple of months ago, with quick shakeups in the company, particularly in the Media & Entertainment Distribution division, which is responsible for Disney+. Disney Executives, including Chapek’s right-hand man, Kareem Daniel, and Arthur Bochner, Chapek’s Chief of Staff and Speech Writer, have left the company.

Bob Iger has diagnosed The Walt Disney Company’s downfall as it was “losing its soul.” Iger himself has said the Disney Parks are too expensive and knows that change needs to be made.

Now, Iger continues on his journey to bring back the magic for the stock dipping company. According to a report, Bob Iger shared the importance of in-person collaboration in an email sent to hybrid Cast Members on Monday, January 9, 2023. The email states:

“As I’ve been meeting with teams throughout the company over the past few months, I’ve been reminded of the tremendous value in being together with the people you work with,” Iger wrote. “As you’ve heard me say many times, creativity is the heart and soul of who we are and what we do at Disney. And in a creative business like ours, nothing can replace the ability to connect, observe, and create with peers that comes from being physically together, nor the opportunity to grow professionally by learning from leaders and mentors.”

The report goes on to note that starting the week of March 1, 2023, hybrid employees must return to corporate offices four days a week.

Hybrid employees, or work-from-home staff, increased among companies around the globe in 2020 when the COVID-19 pandemic spread. Now, years later, Iger is bringing Disney employees back to the office with this new policy.

While this decision will likely have mixed emotions from Disney’s current hybrid Cast Members, Disney isn’t the only one making this shift in policy. We’ve seen other large companies, such as Twitter and Apple, mandate their employees to return to in-house office time.

As always, we will be sure to keep Disney Dining readers updated as we learn more about this new policy for Disney’s hybrid Cast Members, being implemented in March 2023.

2023-01-09
Jamie Sylvester
Previous: TRON Coaster To Require Something No Other Disney World Attraction Does
Next: How You Can Get Bladder Polyps at Walt Disney World Resort