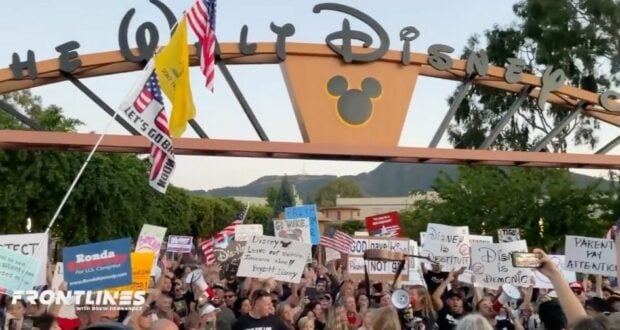 For weeks, Disney has been dealing with the fallout from its handling of the controversial Parental Rights in Education bill that was recently signed into law by Florida Governor Ron DeSantis. On one side, you have those who believe that Disney should stay out of politics and not have spoken up against the bill — which has been dubbed the “Don’t Say Gay” bill. On the other side, you have those who feel that Disney did not speak up quickly enough. Disney remained quiet for weeks and, by the time they spoke up, thousands of Cast Members felt that the company they loved so much had let them down.

Those Cast Members who felt abandoned by Disney participated in numerous walkouts. Not only did Cast Members walk out at Walt Disney’s headquarters in Burbank, but there were also walkouts at LucasFilm, Pixar, and throughout the Disneyland Resort. Disney CEO Bob Chapek repeatedly apologized to his employees, saying that he was going to be the ally he needed. He has also continued to condemn the Florida bill and said that Disney would put a massive effort towards making sure it was repealed.

Now, the other side is taking to the streets. On April 6, protestors gathered outside of Disney’s Burbank Studios, calling for a boycott of the company. Those protestors believe that Disney is supporting a bill that “grooms” children, and thinks that Disney’s disapproval of the bill is the company trying to be “woke”.

Twitter user junjulaug (@shortandsnark) found himself caught in the traffic caused by the protest and tweeted a video of the event.

Oh look, all the pathetic excuses for humans in Burbank out blocking traffic protesting at #Disney studios. 🖕🖕🖕 GTFO my way, insecure small d***ed people who want to control everyone else’s genitals and lives.

Oh look, all the pathetic excuses for humans in Burbank out blocking traffic protesting at #Disney studios. 🖕🖕🖕 GTFO my way, insecure small dicked people who want to control everyone else’s genitals and lives. pic.twitter.com/D3z38NgXVN

This protest is only the latest step in the Boycott Disney protest that has been trending on social media. Those who are upset with Disney and want them to stay out of Florida politics have called on those who agree with them to not only stop visiting Disney theme parks, but to also do things like not buy Disney merchandise and cancel their subscriptions to Disney+. A conservative media company — The Daily Wire — has also announced that they will be investing in creating more conservative children’s programming to challenge Disney’s.