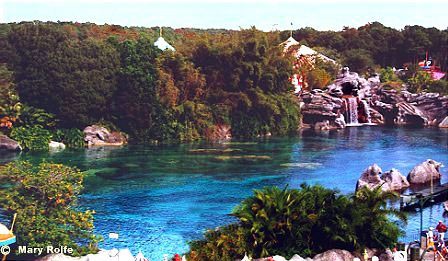 Remnants of a Disney World attraction from days gone by resurfaced this weekend (pun intended; you’ll see), and Guests loved it–especially if they are old enough to understand its significance. Please read on.

If there’s one thing the 50th anniversary celebration at Disney World has shown us, it’s how much the parks have changed over the years. Some of the changes have been welcomed ones, like the addition of perks over the years and the initial development of a system to ensure that Guests with different abilities are able to access the parks.

Other changes, such as the seemingly unjustified rapid increase in ticket prices and the removal of some of our favorite attractions like Mr. Toad’s Wild Ride, have not be so welcomed. Other Guest-favorite attractions have met their demise in the name of Disney “staying relevant,” “meeting Guest demand,” and “reimagining the experience.” And we get that–with some of the attractions.

RELATED: Guest nearly vomits after trying the “most disgusting food at Disney World”

Other attractions, like 20,000 Leagues Under the Sea, met its demise for a different reason. 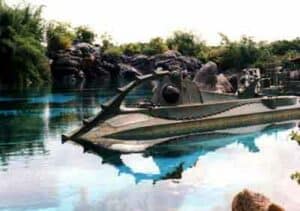 The massive attraction was based on the 1870 novel of the same name by author Jules Verne. During the 10-minute submarine ride, Guests could ride through an enormous 11.5-million-gallon manmade lagoon. There were 12 submarines in the ride’s fleet. 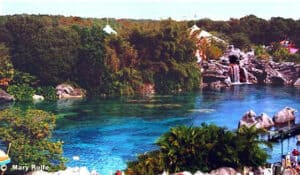 The attraction was one of the largest and most expensive endeavors ever to be attempted by Disney Imagineering. Its costly maintenance would eventually lead to its demise, as the giant lagoon had to be completely drained several times each year so it could be cleaned. Yep, all 11.5 million gallons of water! And after the lagoon was cleaned, it would of course need to be refilled, which was very costly and very time-consuming.

Occasionally, a submarine, called the “Nautilus,” would leak. The leaks caused the ride to close temporarily in 1994—or so we thought. Sadly, in 1996, Disney announced that the ride would not reopen. Ariel’s Grotto now stands where the overwhelmingly large lagoon once was. 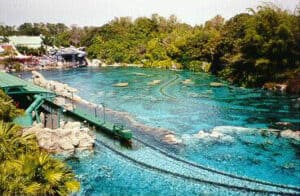 This weekend, however, as part of the Wine & Dine Half-Marathon Weekend, one of those submarines–excuse me, a Nautilus–made a return to the parks. As with most Marathon events at Disney World, there are lots of participants, lots of miles (depending on the event) and lots of Disney extras, like unique photo ops in the parks. This weekend was no exception. 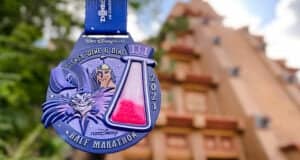 RELATED: Check out the medals for participants at this Marathon Event!

@Bioreconstruct tweeted a photo of the Nautilus on display as a photo op for Guests. For many, it was the first time they’d ever seen one of the legendary ride vehicles.

Former 20,000 League submarine as photo op at start of Disney Wine and Dine half marathon. pic.twitter.com/fewCL8c6yD

Were you in the parks this weekend? Let us know if you got to see this unique vintage attraction-inspired photo op!