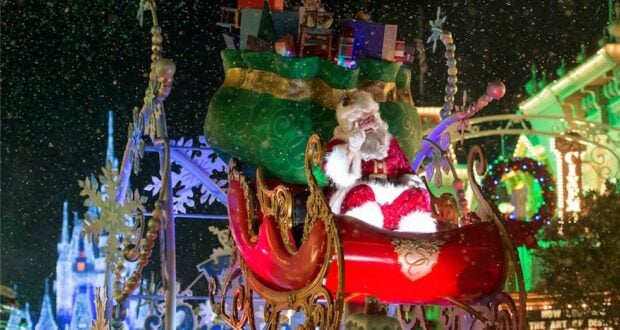 The holidays are in full swing at Walt Disney World Resort! While previously Disney only offered a special Magic Kingdom Park Christmas parade during its special-ticketed Disney Very Merriest After Hours, they have decided to allow Santa to greet ALL Guests with daytime parade hours. Plus, Disney Genie+ Guests have a chance to experience a special viewing area.

Mickey’s Once Upon a Christmastime Parade is now available daily from December 22 to December 31 with two daytime showtimes. Disney describes the parade with, “Delight in an entertaining display chock-full of good cheer. The legendary street comes alive with yuletide spirit on select nights. Snap memorable photos of dancing gingerbread men, marching toy soldiers, and beloved Disney Characters as they float by, waving hello. There’s even a special appearance by Santa Claus–riding in to wish everyone a Merry Christmas.”

If you make the decision to purchase Disney Genie+ for $15 per person, per day via the My Disney Experience App, you’ll have a chance to snag a Lightning Lane pass for the Christmas parade.

@BrookeGMcDonald took to Twitter on December 22 to share, “Mickey’s Once Upon a Christmastime Parade daytime hours begin today and the parade is available as a Disney Genie+ Lightning Lane experience. #disneyworld”. Check out the My Disney Experience App screenshots below:

The Disney push notification notes, “Lightning Lane Entry Information: If you have Disney Genie+ service and are redeeming Lightning Lane entry for this experience, please see a parade-viewing Cast Member at the courtyard in front of Cinderella Castle during your arrival window. The Lightning Lane entrance will be on the east side of the Castle area.”

The holiday parade is an exceptional one as it rolls down Main Street, U.S.A. While cavalcades have been fun to see, we’re thrilled to see a full parade march down the parade path as we await the highly-anticipated return of Magic Kingdom’s Festival of Fantasy Parade in 2022.

Are you making plans to Lightning Lane the Magic Kingdom Christmas Parade? Let us know in the comments.

2021-12-22
Jamie Sylvester
Previous: January is Our Favorite Time to Visit Disney World: Here’s Why
Next: Disney to Hold Birthday Party for Its Oldest Gorilla