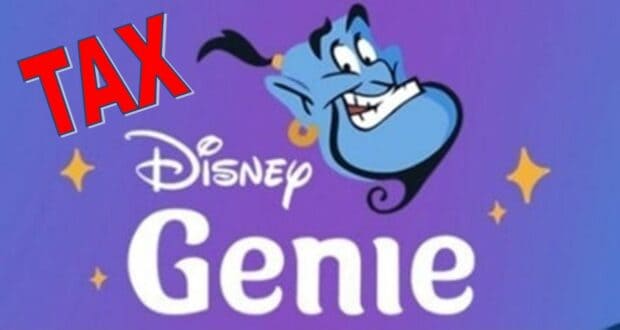 The Genie is out of the lamp! With the launch of the new Disney Genie at Walt Disney World Resort on October 19, 2021, Disney Guests are beginning to learn the ins and outs of the new Theme Park system including the new feature in the app, as well as the functions for paying to skip the attraction lines. The Disney Genie is really a three-part program with the complimentary Disney Genie (built into the My Disney Experience App to optimize your Park day); the Disney Genie+ (much like former FastPass but now $15 per day), and Lightning Lane (eight a-la-carte attractions that don’t come with Genie+ that you can purchase to skip the line). While you’re in the My Disney Experience App, however, you’ll need to know that when you purchase the Disney Genie+ and/or Lightning Lane experiences, you’ll want to be aware that you will be taxed.

The Disney Genie+ allows Guests to skip the standby line at 40+ attractions throughout the Disney Parks. Much like the FastPass program, you can select an attraction arrival time from an available list and head to the former FastPass, now Lightning Lane entrance at your selected time. Disney has announced the cost is $15 per person, per day. As shown in the My Disney Experience screenshot below, be aware that you’ll really be paying almost $16 per person, per day.

disney budget disney genie disney genie+ fastpass lightning lane tax walt disney world 2021-10-19
Jamie Sylvester
Previous: ANOTHER fight breaks out down the street at Disney’s neighbor, this time at a bar on property
Next: Guest almost vomits after trying ‘most disgusting’ food item at Walt Disney World! Who thought this was a good idea?