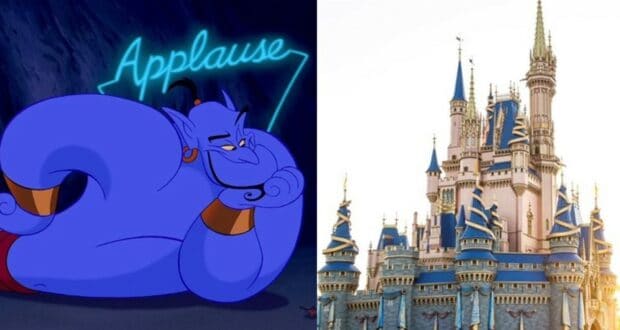 First days are hard! The Disney Genie has arrived at Walt Disney World Resort and Guests are in the Parks exploring and experiencing all the Disney Genie has to offer. When first accessing the My Disney Experience App, you’ll be prompted to update the app which includes the new Disney Genie. There is no separate Disney Genie App. When updating the app, you’ll be able to experience the benefit of the complimentary Disney Genie to navigate and optimize your Disney Park day. You’ll also have the option of purchasing the $15 Disney Genie+ which is similar to the former FastPass program with an attraction list of 40+ experiences. You’ll also be able to purchase individual Lightning Lane attractions for one of eight Lightning Lane attractions. Sound confusing? Imagine creating Disney Genie and keeping Park Guests happy about all the change! Well, Disney Genie isn’t without its hiccups and questions on this day one launch.

Reporter Ashley Carter took to Twitter to share, “So Disney Genie says there are no Individual Lightning Lane selections available for Rise of the Resistance, but after restarting the app I was able to see times to purchase. This is going to be fun.”

Shortly after this tweet – just under one hour into Disney’s Hollywood Studios Park opening – and Lightning Lane for Star Wars: Rise of the Resistance is no longer available for purchase as you’ll see in the screenshot below (even if restarting the app as noted in the tweet above). This means, if you’re planning to skip the wait and Lightning Lane Rise of the Resistance, you’ll want to purchase your Lightning Lane access first thing in the morning before it sells out. It seems odd to have an a-la-carte purchase option that sells out within the first hour of the Park opening.

Scott Gustin took to Twitter to share: “At Park open for MK and DHS, additional Individual Lightning Lane times for Mine Train and Rise of the Resistance opened up. Seems to suggest they are saving inventory for non-resort Guests. If this stays the same, I’m not sure the 7 am Resort early booking “perk” is a perk.” Gustin followed that tweet with: “At 9:08 I can purchase a 9:10 paid LL. Right before 9, the earliest time available was 3pm.”

Brooke Geiger McDonald took to Twitter to share a similar situation tweeting “Additional Individual Lightning Lane inventory released for Star Wars: Rise of the Resistance at 9 am. At 8:59am next return time was 7:15pm; at 9am it was 10:05am. #disneyworld”

It looks like sometimes a delete of the app and a reinstall may be needed. Carter tweeted, “The app kept giving me error messages when trying to make new selections. It was telling me I didn’t have a valid Park pass, which I did. So I deleted the app and reinstalled it. I was then able to see my itinerary for my updated Park plans and make a new Lightning Lane selection.”

Disneyland Resort Guests? The Disney Genie has only launched at Walt Disney World as of October 19. Disney hasn’t set a launch date for Disneyland just yet, but it is coming! While we think overall the Disney Genie update on the app will be useful, it’s definitely not without its hiccups. Hopefully, Disney will listen to Disney fans’ issues and correct or adjust as needed going forward.