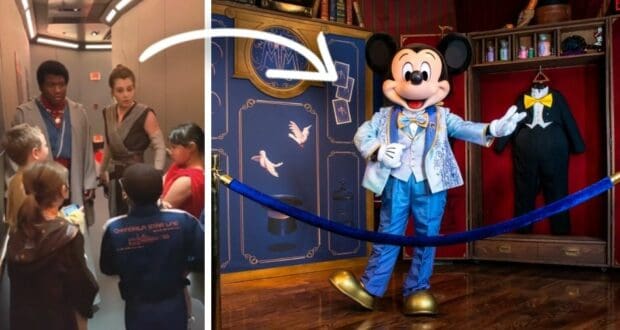 Have you been to Walt Disney World Resort since the phased reopening began in summer 2020? What was missing? As huge Disney fans, visits since the reopening has been lacking that personalized character interaction. Great news as Disney’s newest Resort Hotel experience, Star Wars: Galactic Starcruiser, doesn’t seem to have any character physical distancing in play! SO… can Mickey be next? PLEASE?

RELATED: You Can Now Pay to Skip the Line for Mickey Mouse & Others

The first video shows an INCREDIBLE Cast Member. I mean, this guy deserves a raise! He’s an impressive character and stays in a character role interacting with Guests surrounding him… with no physical distancing insight. Check out the video below or find it here:

In another video posted by @brookegmcdonald, you’ll see several Star Wars characters including Rey, Chewbacca, and Stormtroopers interacting closely with Guests. No ropes or barriers to separate the interaction:

The interaction and story immersion on the Halcyon Starcruiser meant so much to the kids that this photo below captures just how important such an experience was as the kids teared up because they had to leave the Starcruiser:

So sweet! Now that character physical distancing doesn’t apply to Disney World’s newest Resort experience, we’re keeping our fingers crossed that Disney will once again return the personal interaction that was found pre-COVID with character greetings around the Disney Parks and Resort.