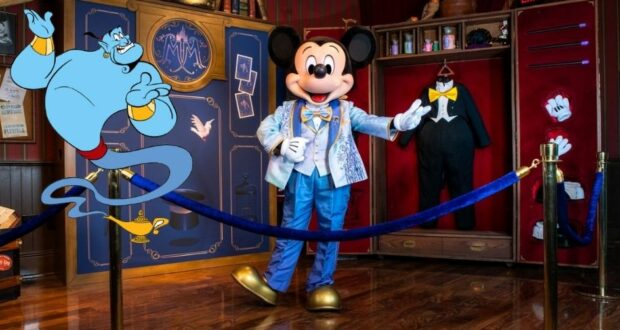 Well, Disney fans. Walt Disney World Resort’s Genie is out of the lamp. As Disney fans have been adjusting from the former complimentary FastPass service to the upcharge Genie+ service, we’re now seeing Mickey and friends have been added to the list of options to pay to skip the line.

If you have yet to use the Disney Genie there are a few things to know. First, there is a complimentary Disney Genie option within the My Disney Experience App. This feature helps Guests navigate the Parks, making suggestions on where to head next.

Then there is the Disney Genie+ which is basically the former FastPass service but now costs Guests $15 per person, per day. Schedule a Genie+ Lightning Lane access, use it, then schedule another… and so on.

And lastly, there are individual Lightning Lane attractions which are a la carte attractions that are NOT part of the Genie+ Lightning Lane access and fee, but instead can be purchased for a set price based on the current crowd levels in the Park to skip the standby line.

Now, that Walt Disney World Resort characters are making a return, we’re seeing favorites such as Mickey Mouse himself added to the list of experiences you can pay to skip the line for. Keep in mind, these characters are not available for a hug and/or autographs yet. The former meet and greet experience is now a “character sighting” experience.

RELATED: How Many Guests Are Actually Buying Disney Genie+?

Currently, there are no characters available to see via Disney Genie+ at EPCOT or Disney’s Animal Kingdom.

This means that if you purchase the Disney Genie+ for each person in your party at $15, you can try to snag Lightning Lane access so you don’t have to wait in line to see Mickey, Princess Tiana, Princess Cinderella, other select/unannounced Disney Princesses, and Olaf. On the flip side, if you haven’t budgeted to spend the $15 per person for the day for Disney Genie+, you’ll be able to wait to see these Disney characters in the standby line.

While we have personally used Disney Genie+ and the a la carte Lightning Lane attractions, we know when going as a large family, that $15 per person can easily add up each Disney Park day. Even though we aren’t big fans of Disney Genie+ for rides, it seems so much worse now that Disney has added characters (including MICKEY!) to the mix of paying to skip the line.

What are your thoughts? Are you willing to pay to skip the line to see Mickey Mouse and his pals? Let us know in the comments.