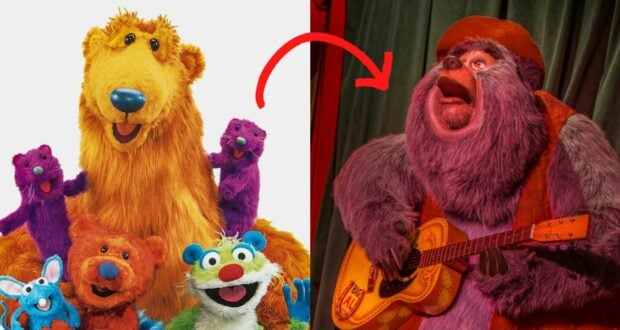 First debuting in 1997, the children’s television series, “Bear in the Big Blue House,” is regaining popularity… and fast! But, could we see Bear and his friend make their way into the Disney Parks?

While the last episode of “Bear in the Big Blue House” aired in 2006, the reruns of the show are gaining traction as they landed on Disney’s streaming platform, Disney+, in October 2022. It seems like Disney fans can’t get enough of Bear, Tutter the Mouse, Ojo, Treelo, Otters Pip and Pop, Shadow, Luna the Moon, and Ray the Sun.

Disney+ describes the series as “Bear in the Big Blue House provides children with valuable tools for growth in key areas of music, social skill development, and cognitive learning through integrated programs combing music, movement, and exploration. With Bear and all his friends, learn about cooperation, teamwork and more.”

There is currently a span of four seasons of Bear, surmounting over 100 episodes for young (and old) to enjoy on Disney+. But, could we see “Bear in the Big Blue House” make its way into the Disney Parks?

Noel MacNeal (@NoelMacNeal), a talented American puppeteer and the director, writer, voice, and puppeteer of Bear from “Bear in the Big Blue House,” took to social media to share his excitement that Bear is trending on Disney+.

Note in the video below, MacNeal mentions Disney Park possibilities:

MacNeal points out that “Disney notices things like this” in reference to Bear trending on Disney+. “Maybe they’d like to have the same kind of experiences in the Parks?” He also asks the question, “Would you want to see Bear and his friends back in the Disney Parks?”

But where would Bear and his friends fit at Walt Disney World Resort? It makes the Disney mind wonder!

RELATED: The Best Attractions for Midday Breaks in the Disney Parks

While Disney officials have yet to confirm Bear’s introduction into the Disney Parks, we know that Disney doesn’t add new attractions as easily as they replace current ones.

Could Disney look at replacing something such as the iconic Country Bear Jamboree with “Bear in the Big Blue House?” Surely the beloved character Big Al, and others such as Liver Lips McGrowl will stay put… right?

We suspect that with the nostalgic experience of Country Bear Jamboree, Disney wouldn’t touch that attraction… but we have said that before for experiences such as Magic Kingdom’s former Snow White’s Scary Adventures, Mr. Toad’s Wild Ride, and the current Splash Mountain retheme to Tiana’s Bayou Adventure.

RELATED: Magic Kingdom Once Had a Ride That Sent You To Hell

Or, could Disney look to place Bear at Disney’s Hollywood Studios? Surely Bear wouldn’t replace the current Muppet*Vision 3D? Or how about joining the Disney Junior cast at Disney Junior Play and Dance? In that same Animation Courtyard, Voyage of the Little Mermaid is still closed. Could this be a new opportunity for Bear?

RELATED: Disney Talks All Things Ariel, But Still Quiet About “Voyage of The Little Mermaid”

Could “Bear in the Big Blue House” find a new home in the unknown future of DinoLand U.S.A. at Disney’s Animal Kingdom? Or even take up residence somewhere amid EPCOT’s Park overhaul?

Between 1999 and 2001, Bear did have a spot in the Disney Parks with a show called “Bear in the Big Blue House: Live on Stage.” It was an interactive stage show for kids with Playhouse Disney at Disney-MGM Studios (now Disney’s Hollywood Studios).

Could Bear be making a grand comeback? Only time will tell if “Bear in the Big Blue House” is truly worthy of Disney Park space once again.