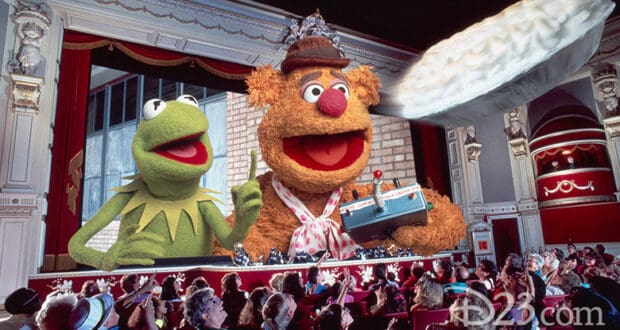 Have You Noticed These Details in Muppet*Vision 3D?

Disney’s Hollywood Studios is home to some of the most popular attractions at the Walt Disney World Resort including Toy Story Mania, Star Wars: Rise of the Resistance, Mickey & Minnie’s Runaway Railway, The Twilight Zone Tower of Terror, and more. In addition to these amazing attractions, there are also several underrated experiences that Guests should not miss out on. 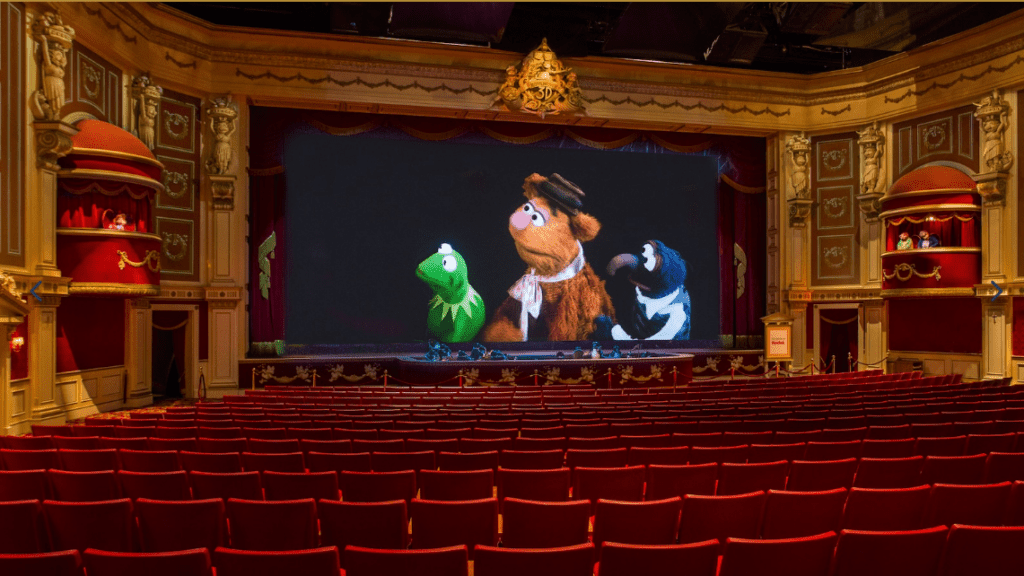 Muppet*Vision 3D is a hilarious attraction found in the Grand Avenue area of Disney’s Hollywood Studios near Mama Melrose’s Ristorante Italiano, where Guests can enjoy a zany and chaotic adventure as only The Muppets can deliver. Featuring a lengthy preshow and main 3D experience, the attraction is filled with humorous and in-depth details that many Guests often overlook.

With laugh-out-loud moments and favorite characters like Kermit, Miss Piggy, Gonzo, Fozzie Bear, Sam Eagle, Rizzo the Rat, and more, let’s check out some of the great details of Muppet*Vision 3D that help make the attraction so wonderful. 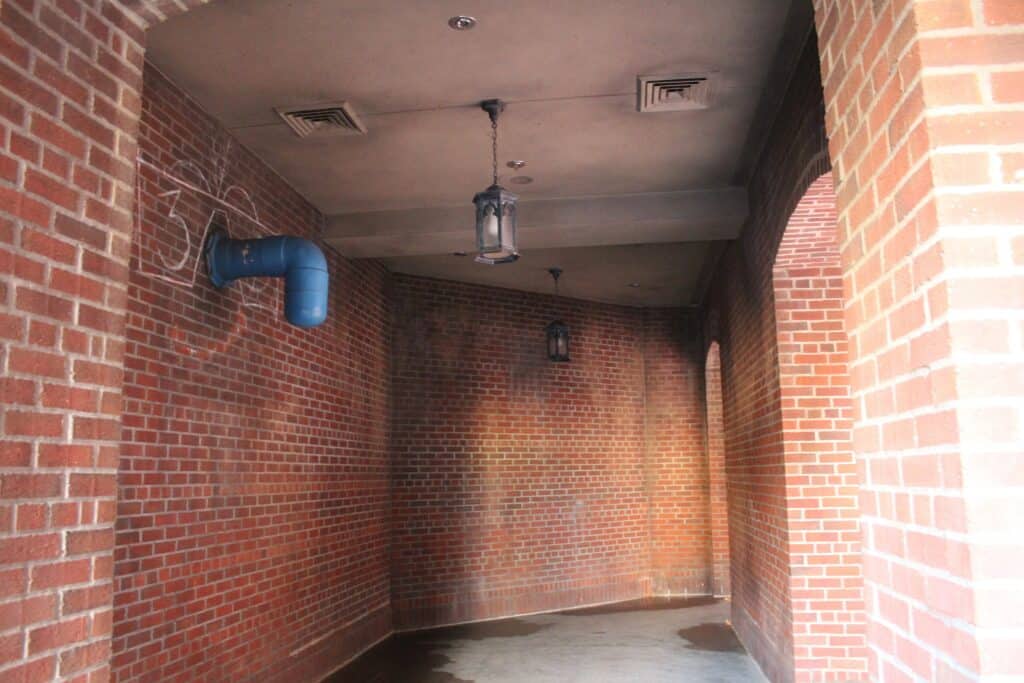 Before entering the main attraction building, there is a small courtyard to the right of the entrance which serves as an overflow queue on the rare occasion that Muppet*Vision 3D has a large crowd. While walking through the courtyard, there are plenty of funny references to The Muppets, including a nod to Guest favorite Gonzo and his rather large nose. Guests can spot a large blue pipe coming out of a brick wall and someone has cleverly turned it into Gonzo’s nose by using chalk to draw his face complete with 3D glasses above. 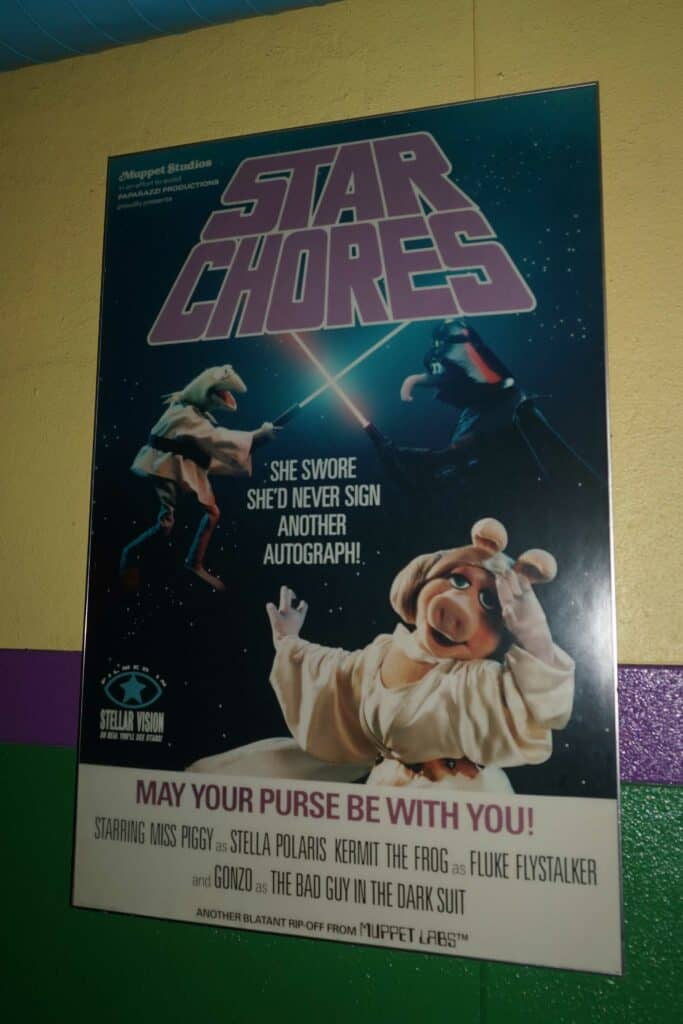 Also found throughout the overflow queue area are several posters advertising some of the most popular films of recent years, but when Guests look closely, they might be surprised to find these versions have twists! Each movie poster features favorite Muppet characters with new taglines that turn the story into something hysterical. Some movies feature a new spin, including Die Hard, Pirates of the Caribbean, and Star Wars, which has been renamed Star Chores and features Miss Piggy exhausted by the demands of fame. 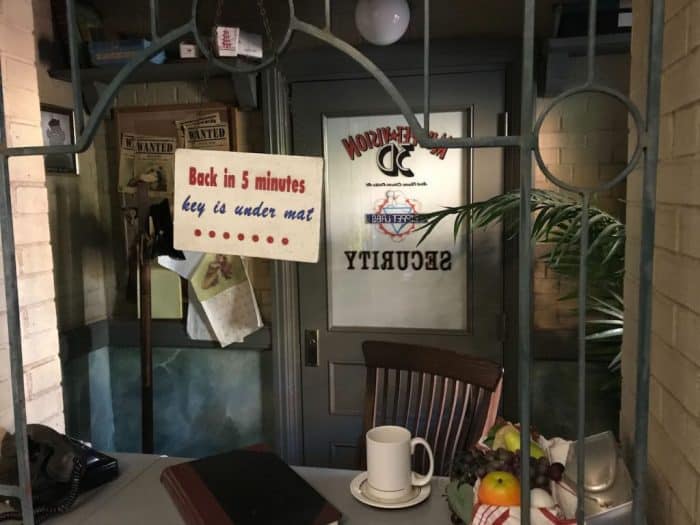 Immediately after entering the main building, Guests can look to the right-hand side of the walkway to spot a reception desk that is situated in front of the security office. The desk is currently empty, but whoever is supposed to be manning it left behind a sign that reads “Back in 5 minutes key is under mat!” While this might seem like a random detail, Guests who lift up the mat will discover that there is in fact a key waiting there for those who need it! 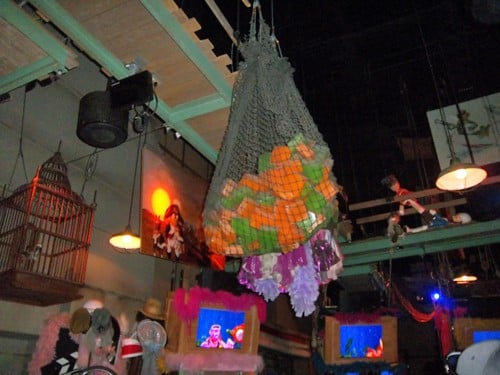 After moving down a small hallway, Guests find themselves inside a large preshow area where overhead televisions play a hilarious show to keep Guests entertained while waiting. Those who take the time to look around the room will notice tons of props and other random items, including a nod to one of the most famous members of the Mickey Mouse Club. Annette Funicello is honored in typical Muppet fashion by a large net that can be found hanging from the ceiling that is filled with colorful cubes of Jell-O. Get it? A net full of Jell-O? Groan! 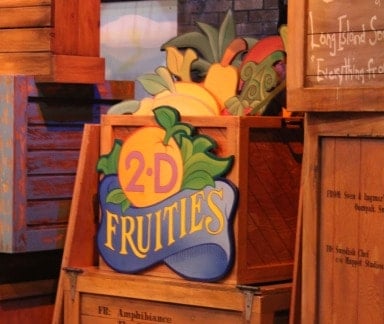 Near the front of the preshow area, Guests can spot a reference to a classic song by Little Richard that has been given a funny spin. One shipping crate features several flat pieces of painted fruits and is appropriately labeled 2D Fruities, which is a tongue-in-cheek reference to Little Richard’s song “Tutti Frutti.” 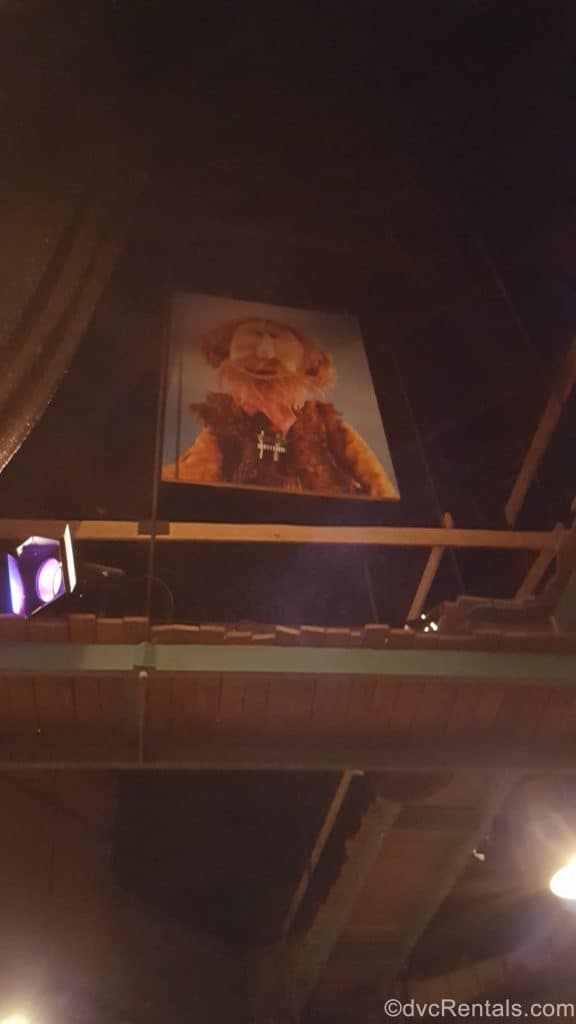 Guests who look up in the rafters of the preshow area can spot many more great details, including a tribute to Jim Henson himself. While Henson died in 1990, his legacy lives on, and Muppet*Vision 3D features a large portrait of him in Muppet form looking down at all of the Guests who enjoy the attraction every day. 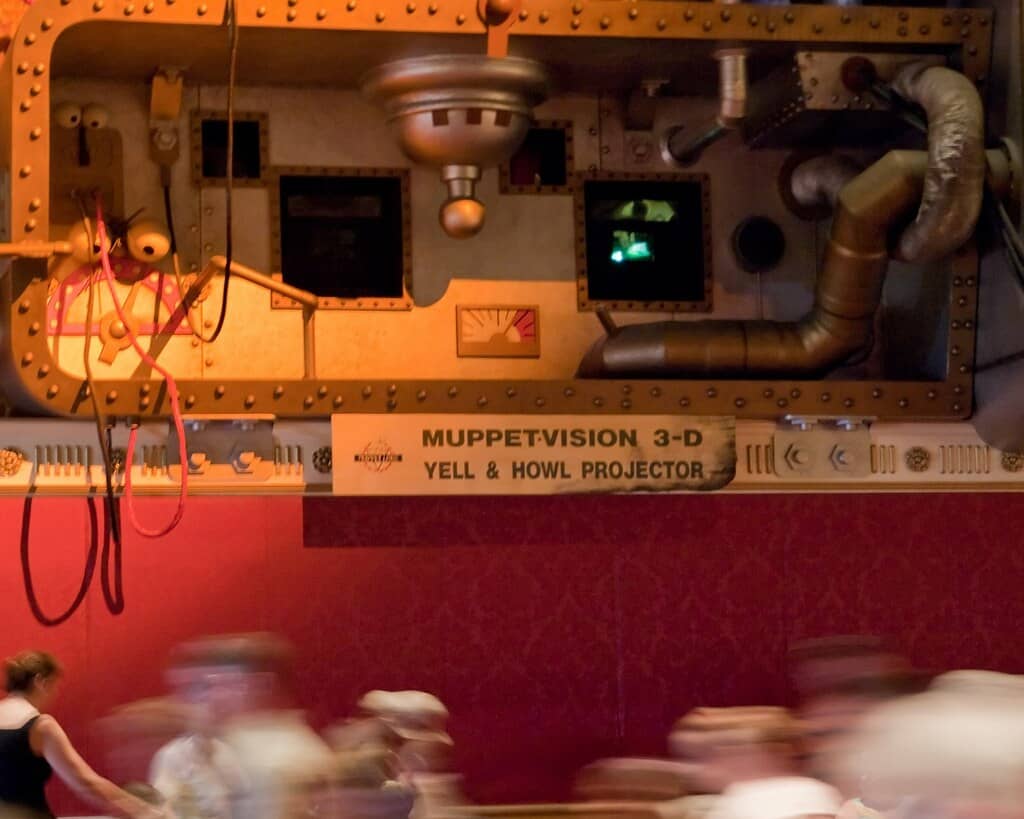 The main show portion of Muppet*Vision 3D takes place inside a large theater, where Guests can sink into comfortable seats and enjoy a 3D presentation on a massive screen in front. While most of the action happens on screen, there is also plenty happening around the entire theater, including in the rear where a large and zany-looking projector is manned by the Swedish Chef. While the projector definitely has been rigged up in an interesting way, it was also fabricated by the fictional “Yell & Howl Projector” company, which is a play on the real company Bell & Howell. 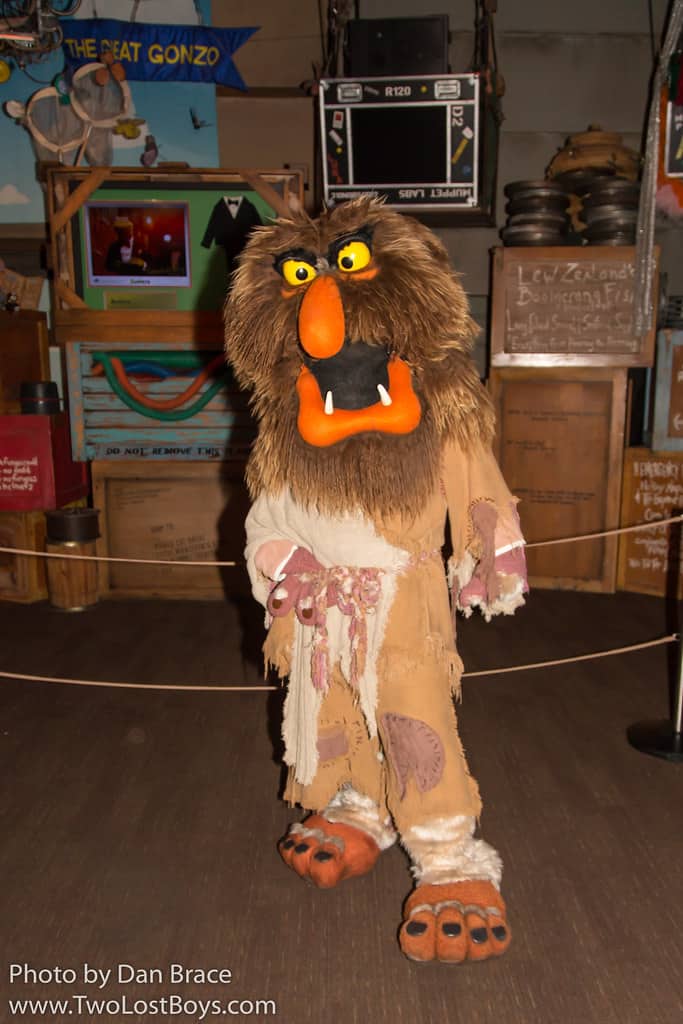 About halfway through the show, Guests find themselves helping Kermit and the gang look for Bean Bunny, who has run away. One of the characters who appears on-screen at the time is Sweetums, who can be seen yelling out “bunny” in his booming voice and looking all around. This becomes funny when a second Sweetums, a Cast Member in costume, physically appears in the front of the theater and continues to search for Bean Bunny by calling out and shining a flashlight all around.

The finale of Muppet Vision 3D is nothing short of total chaos as Waldo rips off part of Miss Piggy’s costume and an ill-fated member of the band ends up stuck in his tuba, leaving a mess in his wake. Guests who pay close attention to the action during the chaos can even spot several dolls from “it’s a small world” in the Magic Kingdom singing their signature song, waving flags, ad parading through the mess!

Muppet Vision 3D 2022-07-07
Caitlin Kane
Previous: Things I Always Do In Hollywood Studios
Next: This classic Magic Kingdom attraction just got several upgrades, and diehard fans were the first Guests to notice