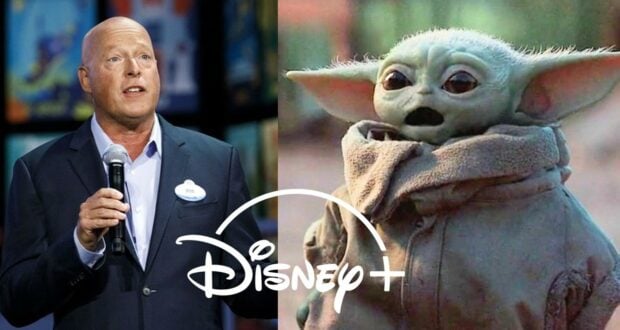 Advertising on Disney Plus? Disney’s CEO Is Considering It

Chances are if you’re a huge Disney fan, you’ve purchased into Disney’s streaming service, Disney+. With original content, classic films, Disney animated shorts, Disney Channel favorites, Marvel Studios, Star Wars, Pixar, National Geographic, and more, it’s a Disney fan’s library of Disney streaming right at their fingertips. Currently, the standard Disney+ will cost right around $7.99 monthly or $79.99 annually. Or, you can select the Disney Bundle which includes Hulu and ESPN Plus for $13.99 monthly. Either way, you can expect plenty of Disney favorites from newbies to old classics. The only additional cost per month is if you decide to stream one of Disney’s new movies that are available via Premier Access for $29.99. One of the highlights of Disney+ is that unlike the streaming platform HBO or Peacock, your show isn’t interrupted by advertisements. Well… as least for now it’s not.

RELATED: Get Ready for Olaf to Recap Favorite Disney Classics Soon on Disney+

On September 21, The Walt Disney Company participated in the Goldman Sachs 30th Annual Communacopia Conference. Disney CEO, Bob Chapek, discussed several pieces of news including news of possible advertising on Disney+. As reported by WhatsOnDisneyPlus: “During a recent virtual Q&A with Disney’s CEO Bob Chapek at the Goldman Sachs 30th Annual Communacopia Conference, Bob was asked about Hulu’s advertising plans, and he mentioned introducing advertising into Disney+.” Chapek is quoted as follows:

I think what’s driving it is that combination of great content that draws a lot of eyeballs and draws a lot of interest and a lot of viewership. But at the same time, really sophisticated modeling and technology that we have that enables our advertisers to target exactly who they want, when they want and how they want. Now, in terms of this extendibility to our other platforms, I think it’s important to realize the different target audiences of the platforms.

And for example, Disney+ has a lot of kids that watch it, and the taste for us to consider advertising on something like Disney+ would be completely different than it might be on a Hulu. So then again, you take that individual, no one size fits all type approach that we are looking at across the world. And you say where do we have that opportunity? Where do we not have that opportunity? And then how does that change over time as we look at combining things or keeping things separate à la carte? And so all this is malleable. Again, it’s soft clay right now. And we are very pleased with what we are seeing with addressable advertising on Hulu.

And I would say that does that lead us to think big thoughts about what could happen in other markets across the world? Certainly, it does. But for right now, again, really happy with sort of the à la carte mode that we have with this bundling opportunity and keeping things the way they are, but that doesn’t say that in the future, we might not look at different opportunities for an increased level of addressable advertising across our platforms.

What do you think? Are you ready to see advertising make its way onto Disney Plus? While the introduction of advertising wouldn’t surprise us, we do enjoy streaming advertisement free! We’ll keep you posted as we learn more about this possibility. In the meantime, if you aren’t already a Disney+ subscriber, you may want to check it out before the launch of Disney+ Day which will take place on November 12. Disney has announced new streaming content and special surprises are on the way! Hopefully, none of the special surprises include the introduction of advertisements.