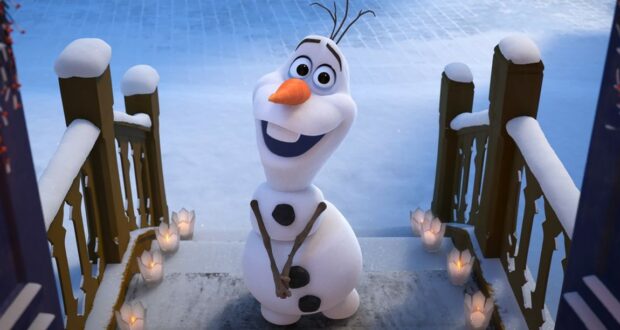 We previously shared the exciting news that November 12 has officially been named “Disney+ Day” by Disney’s CEO, Bob Chapek. There is so much to get excited about with new content and films such as the new Marvel film “Shang-Chi and the Legend of Ten Rings” and Disney’s “Jungle Cruise” arriving on Disney+ to all subscribers on November 12. Among plenty of other new Disney+ experiences, Disney announced, “Olaf Presents” will make a grand debut. In this all-new Disney Plus original series, Walt Disney Animation Studios has created shorts as everyone’s favorite snowman, Olaf, from the popular Disney Frozen film, retells classic Disney films in a way that only the sweet and fun Olaf can!

Disney’s Frozen took to Twitter to share the news of the new Olaf short series: “Olaf Presents, a series of Original Shorts revisiting several classic Disney tales with your favorite snowman, arrives November 12 on @DisneyPlus.” Josh Gad, the voice actor of Olaf, retweeted with post with the message: “Ask and ye shall receive. Get ready for Olaf to recap some of your favorite Disney classics. #OlafPresents only on @disneyplus”

YES! We can’t wait to hear Frozen’s beloved snowman share his take on classic Disney stories. We’re pretty sure it’s going to be hilariously wonderful. And even though we can’t meet Olaf and give him warm hugs right now in the Parks since his former character meet and greet at Disney’s Hollywood Studios Celebrity Spotlight has been put on hold due to COVID, you can still see Olaf with his exciting look and pal Bruni in golden statue form!

Disney Imagineer, Zach Riddley, recently captured a first look at the new sculptures that have arrived at EPCOT for Disney’s Fab 50 character collection in honor of Walt Disney World’s 50th Anniversary celebration. Olaf and Bruni are one of the six statues you’ll find located throughout EPCOT. As you travel through all four Disney Parks, you’ll have a chance to spot the Fab 50 characters in an interactive scavenger hunt on Instagram, known as the “Disney Fab 50“. We can’t wait to spot the Olaf sculpture at EPCOT then check out “Olaf Presents” for its streaming debut on Disney Plus on “Disney+ Day”, November 12, 2021!