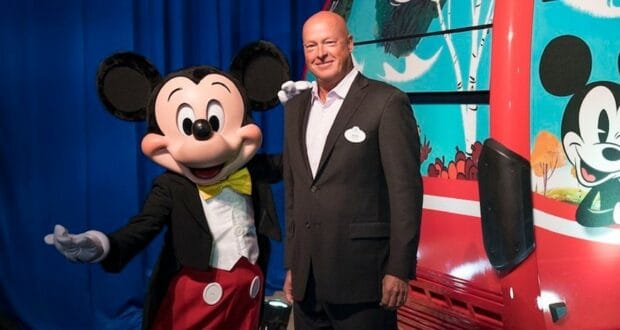 As Disney fans prepare to flock to Walt Disney World Resort for its 18-month 50th Anniversary Celebration beginning October 1, COVID 19 and its variant are still very present in Orange County, Florida. As of recently, Orlando has urged residents and Guests to use less water as the COVID case increase has resulted in a liquid oxygen shortage. Even Disney’s firefighters have battled a COVID outbreak. Most recently, however, the Walt Disney Company is now requiring all Cast Members, including Union Cast Members, to be vaccinated. This new mandatory vaccination has opened some doors for entertainment to return to the Parks, such as the recent announcement of the return of EPCOT’s Candlelight Processional. We’re now learning the Disney CEO, Bob Chapek, is meeting with President Biden to discuss the COVID 19 vaccine mandate.

As reported by The Hollywood Reporter: “Walt Disney Co. CEO Bob Chapek will be at the White House on Wednesday to meet with President Joe Biden, The Hollywood Reporter has confirmed. Chapek will be part of a panel of business leaders set to discuss the White House’s vaccine mandate, which instructs OSHA (the Occupational Health and Safety Administration) to require companies with at least 100 employees to have their workers either receive a vaccination against COVID-19 or be tested for the virus regularly. Other executives at the meeting will include Microsoft CEO Brad Smith and Walgreens CEO Roz Brewer.”

“The President will discuss their leadership on putting into place strong COVID-19 requirements that help keep a safe workplace,” according to a White House official. “This event will also serve as a rallying cry for more businesses across the country to step up and institute similar measures.”

We’re not completely surprised that the Walt Disney CEO is part of the vaccine mandate discussion as we have seen Disney influences in political unfoldings several times in the past. Recently, we learned that Disney is lobbying to kill parts of the Biden administration $3.5 trillion economic agenda. With the massive size and influence of the Walt Disney Company, we’re curious to see how its involvement in this vaccine mandate will unfold.