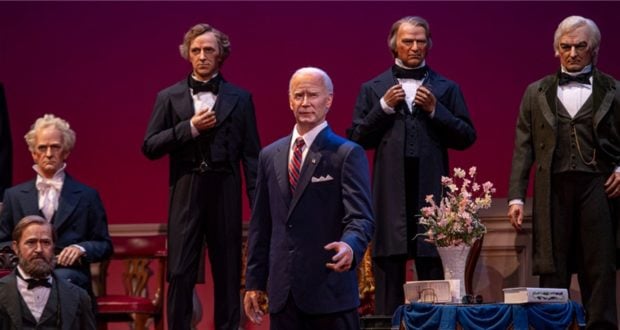 The Hall of Presidents is NOW OPEN at Magic Kingdom

The Hall of Presidents has been an iconic attraction at Magic Kingdom park since 1971. Walt himself originally envisioned the beloved attraction years ago, and Disney continues to carry on the history of the United States leaders through storytelling and life-like animatronics. While we previously shared the news that several Walt Disney World attractions are reopening in the coming weeks, The Hall of Presidents at Magic Kingdom was left with an “opening in August” timeframe with no official opening date. Disney reported the animatronic of the 46th President of the United States, Joe Biden, is ready to go… but they did not give an exact opening date in August – until now.

Walt Disney World has now updated their website to read, “The Hall of Presidents will reopen on August 4, 2021.” Guests visiting Magic Kingdom today (August 3) however have been invited to view the attraction TODAY! As reported by Ashley Carter via Twitter:

The refurbishment for Joe Biden was much briefer than what we expected. For Trump’s Presidency, the attraction closed in January 2017 for refurbishment and reopened in December 2017. It seem the refurbishment process went much faster this time around.

Next time you visit, check out the table next to President Biden as it is adorned with a few special items, each with their own significance to the President—including peach blossoms to represent his home state of Delaware and a pair of aviators as a nod to his proclivity for the sunglasses.