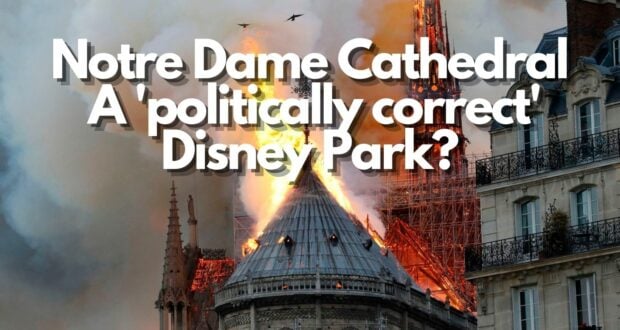 To the horror of those who watched in person, online, and over television news broadcasts around the world on April 15, 2019. the Notre Dame Cathedral in Paris, France, became engulfed in flames. The blaze roared for more than nine hours before being completely extinguished. In the end, 850-year-old structure had suffered extensive damage to its exterior. 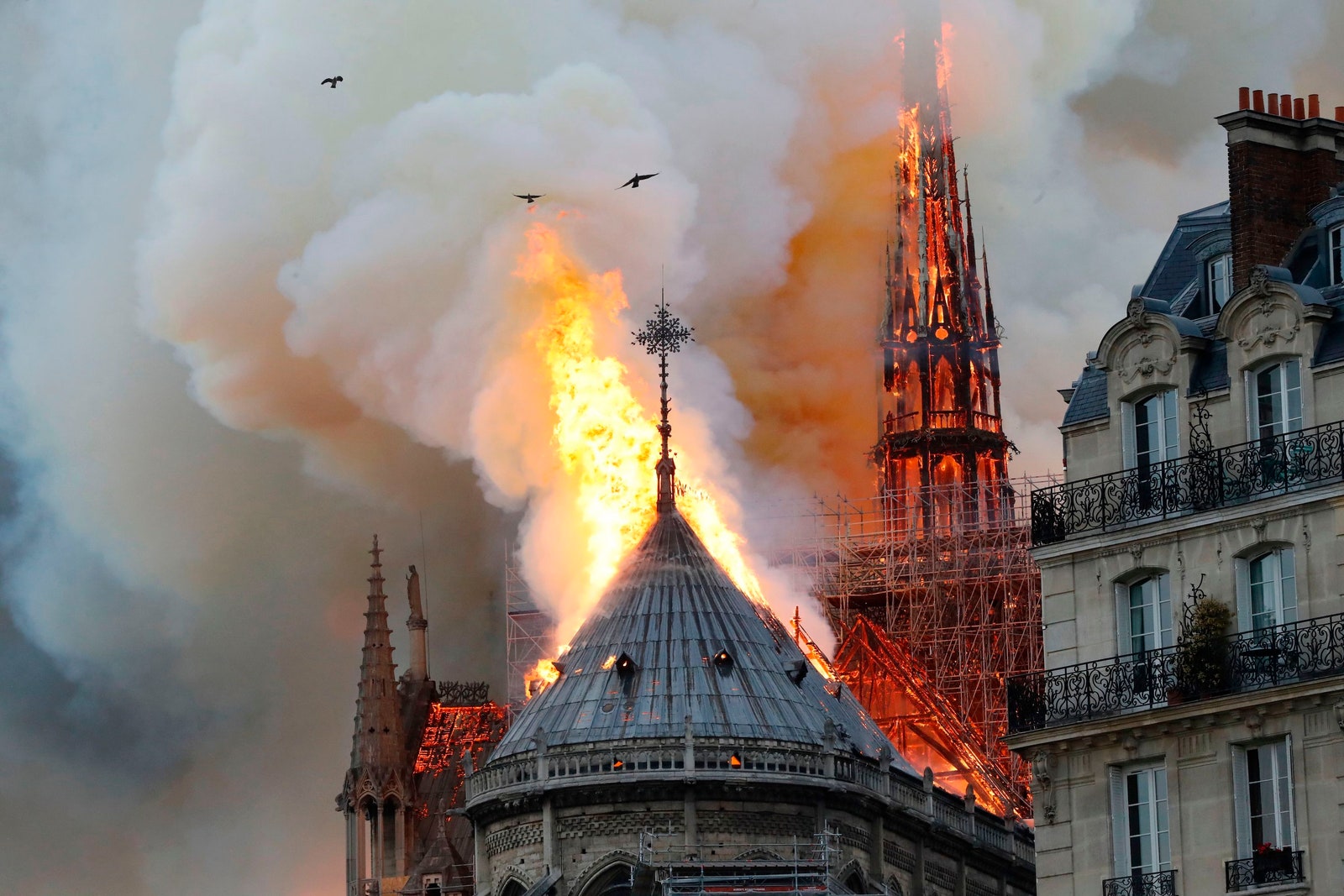 The cathedral’s spire succumbed to the flames, and the majority of the structure’s roof was destroyed. There was also extensive damage to the cathedral’s upper walls, but Notre Dame’s stone vaulted ceiling prevented the interior of the cathedral from sustaining significant damage, as it contained most of the burning roof as it fell.

There was time when the fire initially broke out for many of the relics, artifacts and works of art housed within the grand cathedral to be taken from harm’s way. Some, however, sustained damage from smoke inside the cathedral. Thankfully, the cathedral altar, pipe organs, and 13th century rose windows saw little to no damage. 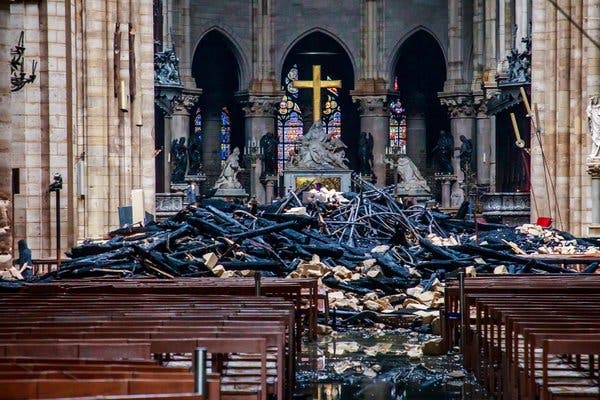 French President Emmanuel Macron promised the people of France that Notre Dame would be rebuilt.

“I make this commitment,” he said, “from tomorrow, a national subscription will be organized in France and beyond our borders. We will call on the most talented people, and there are many of them, and they will come and contribute to this appeal. We will rebuild the cathedral. We will rebuild Notre Dame. It’s what the French expect. This is what our history deserves. This is our deep destiny.”

Since then, Macron has even stated that the cathedral would be completely restored by 2024 when Paris is set to host the Olympic Games, though his estimate has been deemed unrealistic by architectural experts.

In the days following the tragic fire at Notre Dame, pledges of donations from Parisians poured in toward the restoration fund for the cathedral, as did pledges from private donors and corporations like The Walt Disney Company, which donated $5 million toward the cathedral’s rebuilding.

Disney’s donation was announced in a statement by CEO Bob Iger.

“Notre Dame is a beacon of hope and beauty that has defined the heart of Paris and the soul of France for centuries, inspiring awe and reverence for its art and architecture and for its enduring place in human history,” the statement read. “The Walt Disney Company stands with our friends and neighbors in the community, offering our heartfelt support as well as a $5 million donation for the restoration of this irreplaceable masterpiece.”

Only two days after the blaze, nearly $1 billion had been pledged toward the cathedral’s reconstruction.

Clean-up of the cathedral and restoration work began almost immediately following clearance from authorities after the fire was completely extinguished, and by the end of 2019, progress was already being made. But the coronavirus pandemic would halt restoration efforts by the beginning of 2020. 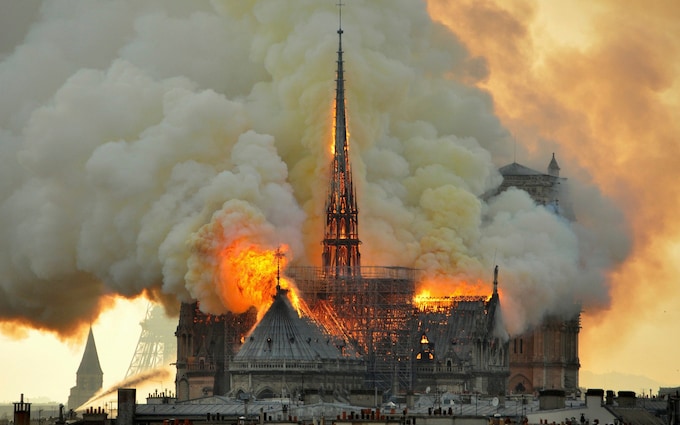 Nearly two years later, however, work to stabilize the structure is complete, and the actual work of reconstruction is set to begin shortly. But now another foe threatens to slow Notre Dame’s progress, and it’s not an enemy you might expect.

“We have to be left to get on with the work and not caught up in the controversies,” Jean-Louis Georgelin, French Army general in charge of reconstruction, explains. “The quicker the decision is made about the spire, the quicker we will be able to really concentrate on the real reconstruction. It’s important that the objectives are set.”

After proposed plans for the interior of the cathedral became public, controversy began to brew over what some refer to as a “woke Disney revamp” of one of the most iconic buildings in history.

The plans call for changes to the interior of the cathedral, even though the interior saw little to no damage from the devastating fire. Critics of the plans compare the proposed cathedral to a theme park, saying that if followed, mock-ups and the latest renovation plans will yield a Notre Dame very different from the one where worshippers gathered before the 2019 fire.

Proposed changes call for the cathedral’s altars, classical sculptures, and confessional boxes to be replaced.  Instead, murals of modern art and new light effects and sound effects will be used to create what the plans call “emotional spaces.”

The latest renovation plans also call for a “discovery trail” within the cathedral, as well as themed chapels along the trail, each one with a focus on the continents of Asia and Africa, the thought of which already gives some Disney’s Animal Kingdom vibes or EPCOT pavilion vibes. Projections of Bible Scriptures onto the chapel walls are also part of the new plans. 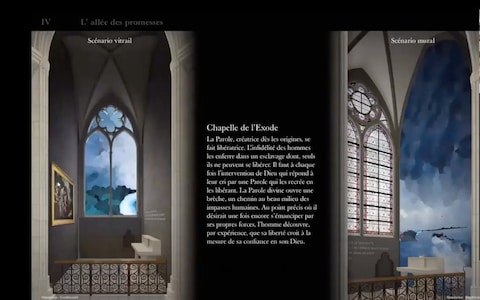 Maurice Culot, a prize-winning Paris-based architect and critic, has seen the proposed plans for the cathedral’s restoration, and they give him definite Disney vibes.

“It’s as if Disney were entering Notre Dame,” he explained during a recent interview with The Telegraph. “What they are proposing to do to Notre Dame [is] a kind of theme park and very childish and trivial given the grandeur of the place.”

A source close to the Notre Dame efforts who has also seen the latest restoration plans is unhappy about what he sees as an attempt to create an air of political correctness with the restoration effort.

“This is political correctness gone mad,” the source said. “They want to turn Notre Dame into an experimental liturgical showroom that exists nowhere else whereas it should be a landmark where the slightest change must be handled with great care.” 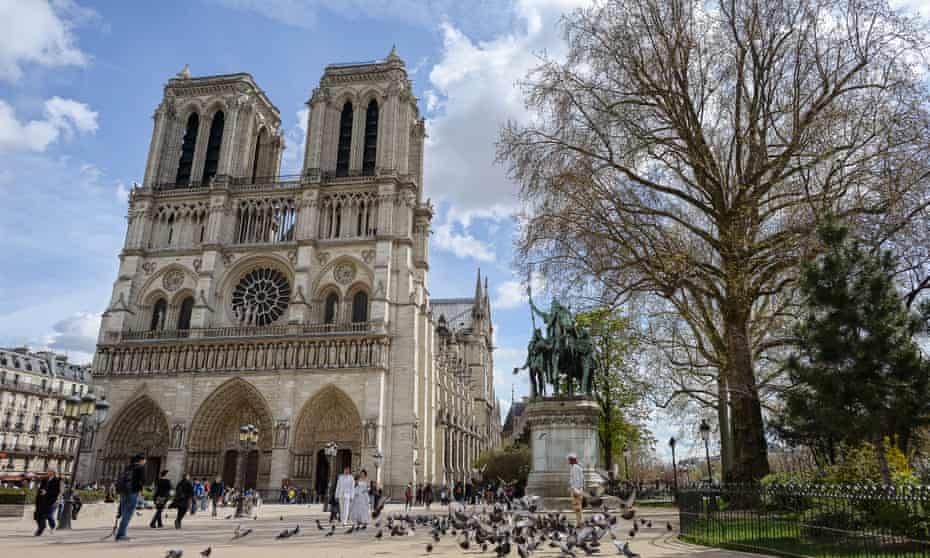 While some see the proposed changes as efforts that would reduce one of the most iconic buildings in human history to a politically correct Disney-esque theme park-type structure and experience, others simply see the changes as unneeded, like columnist Tim Stanley in a post for The Telegraph.

“The proposed, modernist redesign of Notre Dame’s chapels is unnecessary,” he writes. “It was the exterior that suffered the worst fire damage in the blaze of 2019, [and] the chapels were relatively unharmed.”

Did Disney’s generous donation of $5 million toward reconstruction efforts at Notre Dame net the entertainment giant any say in plans for the cathedral’s restoration? There is absolutely no evidence to suggest so, and it’s hardly probable that Disney would even have an interest in such an endeavor. 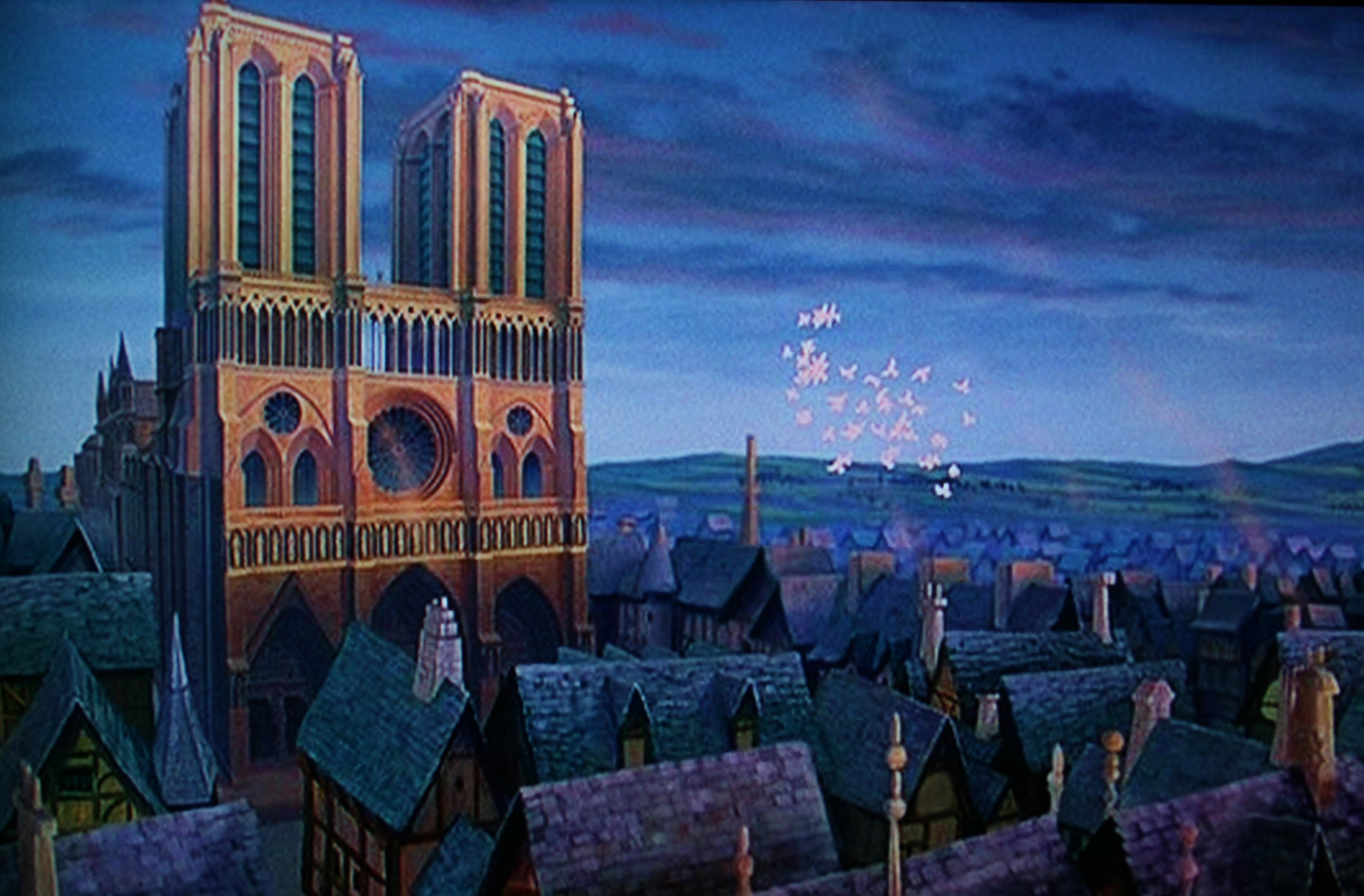 Until its good-faith donation toward the cathedral’s rebuilding in 2019, Disney’s only real tie to Notre Dame was its 1996 animated film based on a novel by author Victor Hugo. Hugo’s novel is incredibly dark, but Disney was able to put enough of a spin on the story that it scored a “G” rating. 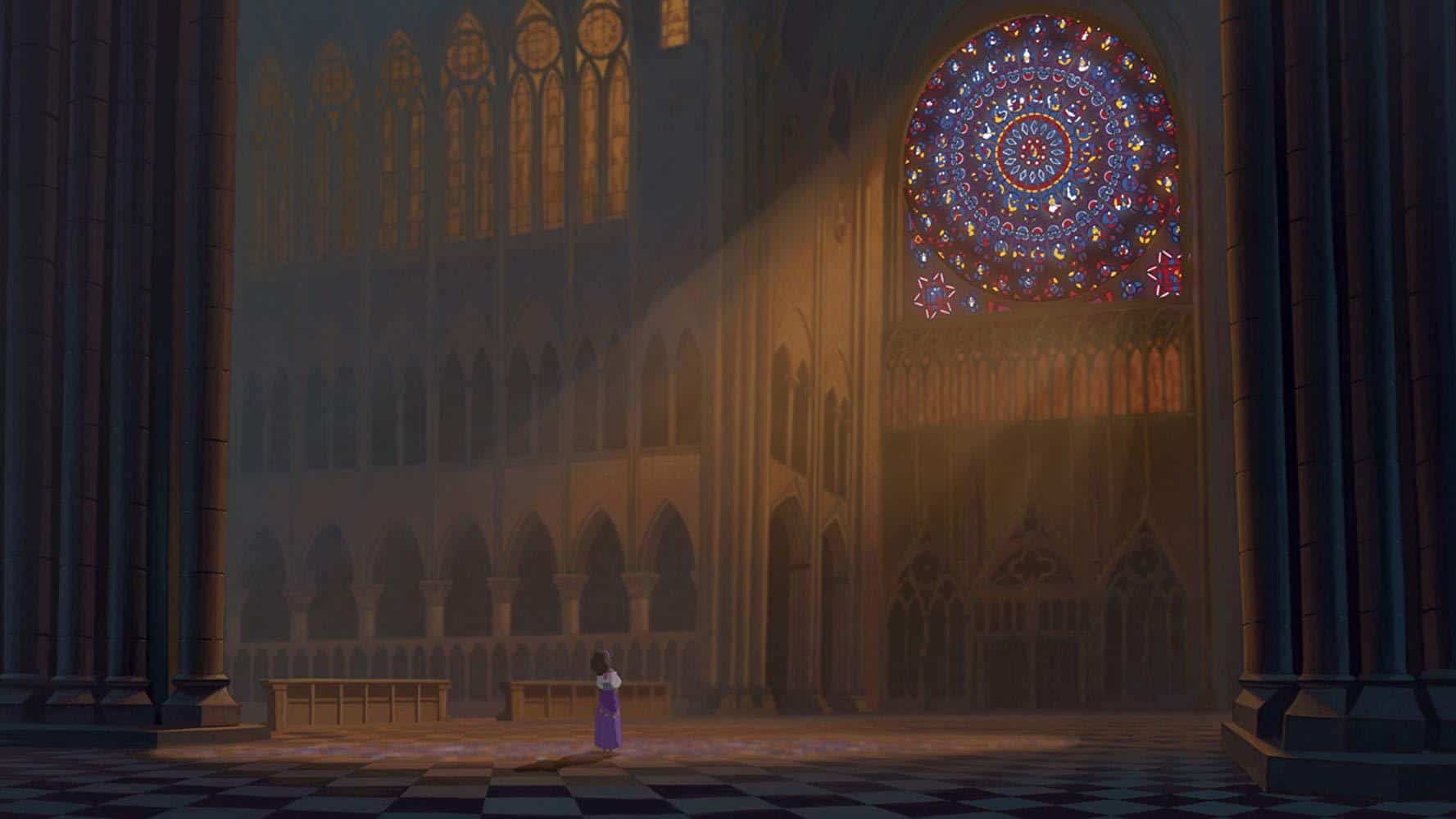 A live-action remake of Disney’s The Hunchback of Notre Dame was also announced in 2019, though at this time, we still don’t have much information about it. We do know that Alan Menken is slated to write the score, and we know that Josh Gad, who plays Olaf in the Frozen franchise, may play a directorial role in the remake.

RELATED: These are some of Disney’s scariest films

What will ultimately come of Notre Dame’s reconstruction remains to be seen, but here’s hoping the right thing is done to preserve the reverence, hope, and heritage felt by many who’ve visited the cathedral over the last several centuries.