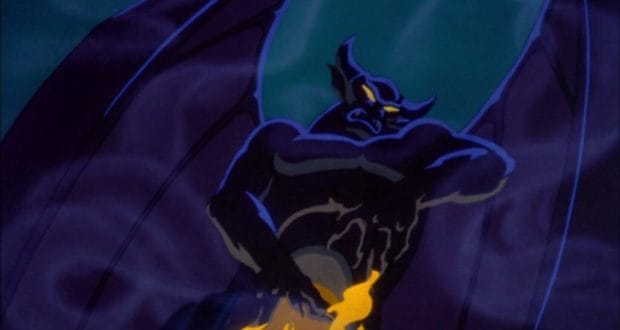 Is there anything better than watching a scary movie in the fall? Well, yes, in our opinion there is. To us, watching a happy Disney movie that occasionally has some spooks is absolutely ideal. We just love a happy ending! But it is spooky season, after all. So we appreciate a good fright every now and then. While Disney movies are generally happy and comforting, many movies have some extremely dark moments. There are certain scenes that we can’t believe made it into a Disney movie! Do you have any movie scenes like that for you? Take a look at some of our top scary Disney animated movie scenes and if you have another one we missed, let us know in the comments! 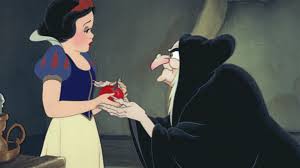 Snow White in the Woods

This scene used to scare us like no other when we were little. This scene comes at a part in the movie where Snow White is running away from the Evil Queen and the Huntsman, who is out to kill her, by the way, and who tells her to flee and never return. She runs through an area of evil, haunted woods. The music is wild, the trees seem possessed, and Snow is beyond afraid. Luckily, we know what she finds in the middle of those woods: the Seven Dwarfs!

The Princess and the Frog has some of the darkest themes in any Disney movie simply because it deals with dark magic and voodoo. These themes fit the tone perfectly for the movie, and we couldn’t imagine the movie without them. But they are dark. And nothing is darker than Dr. Facilier’s unfortunate demise. Because he couldn’t keep his end of the deal with his friends “from the other side,” they took him as payment instead. When they come for him, we see him being literally dragged to hell to the sounds of their chanting. Freaky. 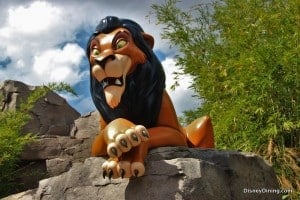 This is a movie that shaped so many of our childhoods. And it probably also shaped a lot of our nightmares. At the climactic scene of The Lion King, Simba returns to Pride Rock to fight his Uncle Scar for his rightful place as king. Scar, who killed Simba’s father Mufasa (dark enough already) and thought Simba was dead fights Simba in a blaze of fire with his hyenas all around him. They scratch and claw and bite and roll all over the rocks, ultimately leading to Scar jumping at Simba before Simba kicks him off and into the throws of the mutinous hyenas. The image of Scar jumping will forever be engrained in our memories.

The End of The Hunchback of Notre Dame

The Hunchback of Notre Dame is arguably the darkest animated Disney movie in existence. The entire movie is intense, dealing with religious persecution, enslavement, and pure wickedness in Paris, France. For us, the scariest scene in the movie comes at the very end when all of Paris is on fire and Count Frollo has Esmerelda tied up to be killed. While this scene also brings about one of the most chilling and hauntingly beautiful moments in any Disney movie–Quasimodo holding up Esmerelda’s body screaming “Sanctuary!” on the steps of Notre Dame–we will never get over how scary the climax is. 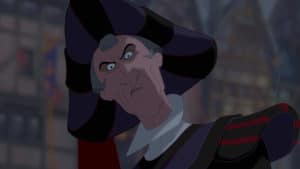 Maleficent Turning Into a Dragon

Speaking of Hellfire, Maleficent is a notoriously terrifying Disney villain in Sleeping Beauty. Even though she does evil fabulously, she’s still evil. Near the end of the film, when Prince Phillip goes to fight Maleficent, she summons her minions from hell to help her out. This, frankly, is horrifying. In a shoot of greenish flames, Maleficent transforms into a massive dragon that should totally have eaten Phillip in one bite. Thankfully, he had the fairies on his side. 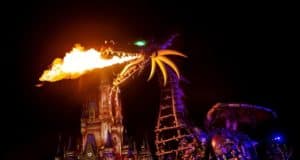 Chernabog. Full stop. Chernabog is a literal demon from the movie Fantasia. The thing that is kind of hilarious about this character is that he has no other purpose than to be scary. He’s only in one segment in the movie and disappears by sunrise. But, in that dark period, he summons his minions (much like Maleficent) and then proceeds to throw them to their deaths in a fiery pit. He’s got giant horns, huge wings, and glowing eyes. So scary.

When Everyone is Under Doris’s Control

While Meet the Robinsons is not a scary film in the slightest, the most terrifying scene comes when Lewis sees a future where the evil hat Doris has taken over the world. Not only is the world a really scary place for him now since the whole thing is on fire and weirdly hat-shaped, but all of his loved ones are being mind-controlled by evil bowler hats, and they’re trying to capture him. This would be terrifying for anyone, much less a little boy who has never had anyone love him his whole life. If only Goob had caught that ball… 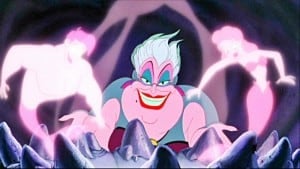 Ursula Being Electrocuted and Stabbed

In our opinion, Ursula is pretty freaky looking on a good day, but she becomes downright horrifying at the end of The Little Mermaid when she transforms into a giant version of herself. Her demise is the scariest part, though. Ursula is defeated when Prince Eric steers his ship directly into her stomach. A jagged piece of wood pierces her as she is also electrocuted. This is the end of Ursula. Seeing her skeleton as she screams is super scary.

This is one of those moments where we go: “I can’t believe that made it into a Disney movie!” And the end of Tarzan, Clayton hunts Tarzan amidst the vines of the jungle. He has his gun with him, but Tarzan snatches it and breaks it. But Clayton just cannot let it go, so he tries to stab Tarzan with a knife and ends up cutting all of the vines around him until there’s only one left. With one last cut of the vine, Clayton hangs himself and dies. We can see his shadow swinging in the rain when his knife falls. Such a dark moment. 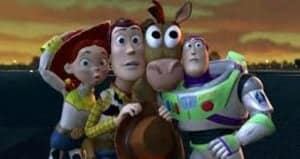 The Toys Going into the Incinerator

In the climax of Toy Story 3, Woody and the gang find themselves heading straight toward the burning flames of a trash incinerator. We’re pretty sure this moment destroyed every 90’s kid known to man. We really thought they were all gone. Thankfully the little green aliens finally mastered the claw (oooOOOoOOoOOoo) and rescue the toys! But the moment as they all hold hands and brace for death is a little too much for our Disney hearts.

Bonus: Anything in the Black Cauldron.

disney halloween Disney Movies Scary Scenes 2021-10-30
Molly Elias
Previous: Princess Anna opens a diaper factory in the Lone Star State. No, we aren’t kidding.
Next: Here’s everything coming to Disney+ this month so you can stay in, bundle up and binge!