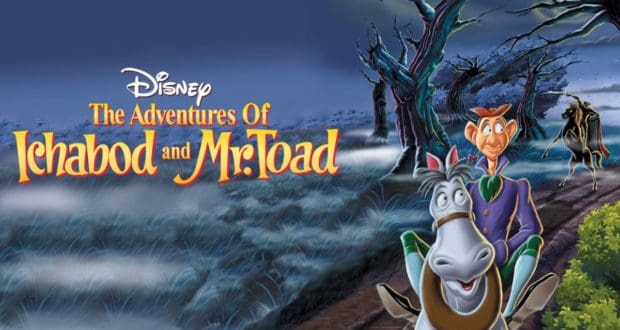 With nearly 100 years worth of entertainment under its belt, the Disney universe has explored everything from fairy tales to the inner workings of human emotions and everything in between. It’s no surprise, then, that whenever a holiday rolls around there’s sure to be a Disney movie or two (or, in this case, ten) to help tide viewers over throughout the season. The following are a collection of some of the studio’s best Halloween offerings.

This bewitching tale about an enchanted trio resurrected in modern day Salem, Massachusetts has evolved into a cult classic over the years, so much so that the Sanderson sisters are now celebrated each October at WDW. Edgy by Disney standards (the film features an off-screen lynching and centers around a “virgin”, the first time the word had been uttered in a Disney movie), Hocus Pocus is best remembered for its silly humor and catchy musical interlude.

2. The Nightmare Before Christmas

Another modern day classic, the story of Jack Skellington springs from the twisted mind of Tim Burton and features one memorable musical number after another as the residents of Halloween Town are introduced to the joys of Christmas via a mysterious portal. The stunning visuals and lively stop-motion animation help create a vivid and unique world with characters that jump off the screen as our hero attempts to salvage the season of giving by putting his own horrifying spin on the holiday.

This black-and-white ode to mid twentieth century monster movies is another Tim Burton production that has become synonymous with Halloween. The plot replaces Frankenstein’s creation with a resurrected pup in a heartwarming tail — er, tale that is sure to appeal to every animal lover who wishes they could be reunited with a beloved pet.

4. The Adventures of Ichabod and Mr. Toad

A classic animated double-feature that includes a pair of literary adaptations, the Ichabod portion showcases the vocal talents of Bing Crosby as he regales us with the harrowing tale of the small town school teacher who’s terrorized by the headless horseman. Its climatic sequence, as Ichabod attempts to navigate his way through the haunted woods while being chased by the sadistic menace, is sure to have you on the edge of your seat.

Inspired by the classic Disney ride, this family-friendly adaptation stars Eddie Murphy as a real estate agent who endures all manner of spooky encounter as he visits the spirited property with his family. Fans of the iconic ride will appreciate the recreation of some of its more memorable moments and characters, such as the ballroom dancers, Madam Leota and, of course, hitchhiking ghosts.

What screams Halloween more than a world of monsters who literally obtain their power by scaring children while they sleep? Monsters, Inc. is in the business of scaring, and business is good. With all-star scarer James P. “Sulley” Sullivan vying to break the all-time scare record, the only thing that stands in his way is… a toddler named Boo? Well, that and his fiendish nemesis Randall, who will pull out all the stops in order to topple his rival and claim the crown for himself.

Following in the footsteps of other Disney Channel originals, this feature centering on the undead includes a chorus of musical numbers and a family-friendly plot that pits the outcasts against the popular crowd. The film is aimed at the same younger viewers who have helped catapult the Descendants films into a franchise, though adults will still appreciate the elaborately choreographed dance numbers as well as the film’s message of inclusivity.

Pixar’s recent hit centers around a celebration of Dia de los Muertos, or Day of the Dead, as young shoe shop apprentice and aspiring musician Miguel finds himself a visitor of the underworld, where he must evade his expired ancestors while showcasing his forbidden passion for song. His only ally on this journey is Hector, a forgotten outcast desperately seeking an opportunity to visit his family in the land of the living before he fades forever into obscurity. It’s a touching film about the importance of family and honoring the memory of those we’ve lost, featuring the breathtaking visuals and heart we’ve come to expect from the innovative animation studio.

This live-action re-imagining of Sleeping Beauty tells the story from the perspective of the classic film’s villain. In this interpretation, Maleficent inserts herself as the secret guardian of Aurora, the child princess who is forced to live in solitude under the guidance of three bumbling fairies. This story humanizes Maleficent, offering her a chance to redeem her past indiscretions while exacting revenge on the cowardly king who helped turn her into a monster.

Boasting a cast of Hollywood heavyweights (including Meryl Streep, Johnny Depp, Emily Blunt, and Anna Kendrick), Into the Woods takes viewers on a musical journey through timeless fairy tales as a baker and his wife are forced to gather ingredients for a witch’s potion. Along the way, they encounter everyone from Cinderella and Rapunzel to little Red Riding Hood and Jack and the giant who lives at the top of his beanstalk.

2020-10-22
Mike Riccardini
Previous: “The Holiday Cookie Stroll” Details at EPCOT International Festival of the Holidays
Next: Disneyland Paris New Energy Project Will Be One of the Largest Solar Canopy Plants