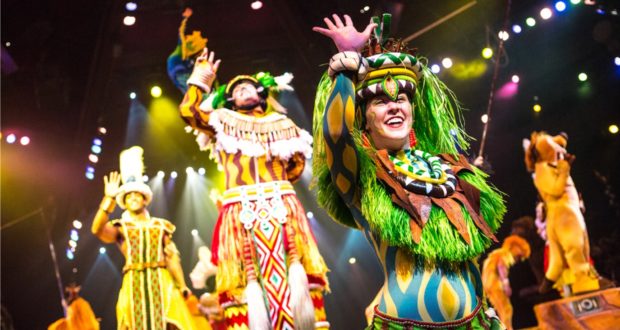 There is no bad month to visit Walt Disney World. Each one has its own advantages. That said, May 2021, just might be the best month to visit! Here are a few of the reasons why.

If you’ve ever visited Walt Disney World in the summer, you most likely experienced a strong thunderstorm each afternoon. The storms pass quickly, but then the humidity reaches a level that you never thought possible. In early May the daily storms have not usually started. That doesn’t mean it won’t rain, but there is a smaller chance of severe storms until partway through the month.

Disney’s Blizzard Beach Water Park reopened in March. While the water is heated, back then it could still be chilly walking between attractions, and the weather wasn’t always nice enough to want to lie out in the sun for a while. May offers warmer temperatures and plenty of sunshine (please use sunscreen). You don’t need a reservation to enter Blizzard Beach, but capacity is limited, which means that it will most likely fill up often during the summer months. May could be the last less-crowded month for a while.

Speaking of summer, the unofficial start is Memorial Day. This year it will be May 31. The start of summer also means the return of crowds. Disney Park Pass reservations are going to be harder to get as more people return to Florida after taking last year off. Plan your May vacation before the holiday, or take an extended holiday weekend. Either way, there are plenty of reasons to celebrate, and what better place to celebrate is there than Walt Disney World?

Another annual celebration will take place this year on May 9. Whether you are a mom, want to celebrate with your mom, or plan to spend time with someone who is like a mother to you, Walt Disney World is the perfect place to do it. Time at Walt Disney World is also a nice way to remember the mother or grandmother who is no longer with you. You don’t need to have a theme park reservation to celebrate mom! Disney Springs has some great restaurants, or you could make a reservation at one of the resort eateries. Walt Disney World has many delicious treats to help you celebrate, and they are sure to put smiles on everyone’s faces.

There is one more special May date to talk about. May 4 is also known a Star Wars Day (“May the Fourth be with you”). While there is not an official celebration planned, it is a lot of fun to visit Disney’s Hollywood Studios on May 4! This will be the first Star Wars Day since Star Wars: Galaxy’s Edge opened, since it was closed last year. The “Star Wars” community really loves Disney Bounding, so there should be some creative non-costumes. Disney sells a small amount of merchandise to commemorate Star Wars Day. Currently Disney’s Hollywood Studios is at capacity for May 4, but keep trying! Spots will open up as people change their plans. And please, if you have a Disney Park Pass reservation that you aren’t going to use, cancel it so that someone else will have a chance to go.

While the Flower & Garden Festival is modified this year, there isn’t a feeling that something is missing. Sure, the Eat to the Beat Concert Series needs to return, but Disney has brought in some great Orlando-based acts so that there are still live concerts. This year’s festival offers plenty of great food, the topiaries look better than ever, and the gardens are gorgeous. The Taste of Epcot International Flower & Garden Festival is so good this year that you might want to plan two days at Epcot.

The Tomorrowland Transit Authority PeopleMover is one of the most underrated rides at the Magic Kingdom. You can sit and relax for ten minutes, enjoy a nice breeze, and see Tomorrowland from a different perspective. Many guests didn’t realize how much they enjoyed the ride until it was closed for refurbishment. The reopening date kept getting pushed back, and there were rumors that the ride would never reopen. Fortunately, those rumors were wrong, and the PeopleMover is moving people once again! If you’ve missed this ride as much as we did, that’s reason enough to visit Walt Disney World this May.

Disney Springs reopened last May, and the Walt Disney World theme parks followed in July. One thing that has been strongly enforced for almost a year is that masks need to be worn, except when eating or drinking. There were even Cast Members stationed near the icons to remind guests that maskless photos were not allowed. Disney has since relaxed that rule. You are now allowed to take your mask off for a quick photo, with a couple of stipulations. You need to be outdoors, stationary, and six feet away from others. The rest of the face covering rule still applies, but it’s nice to finally be able to smile for a picture once again.

1. Festival of the Lion King to Return

Most live shows have not yet returned to Walt Disney World. It is just not possible to follow current CDC guidelines on the stage. That said, it was announced a while back that Festival of the Lion King is being reworked and will return. We still don’t have a date, but we have a month. Walt Disney World President Jeff Vahle announced on Instagram that the show will return “mid-May”. He also shared pictures with the cast and crew. While we’d like an exact date, it’s nice to at least have a timeframe. The return of Festival of the Lion King is one of the main reasons why May could be the best month to visit Walt Disney World.