Whoopi Goldberg Goes Wild During “The View”, Running Around the Stage and Yelling During Live Broadcast

Whoopi Goldberg went wild during Wednesday’s live broadcast of ABC’s The View as she raced around the stage on-set for the show, yelling out commands to an inanimate object. 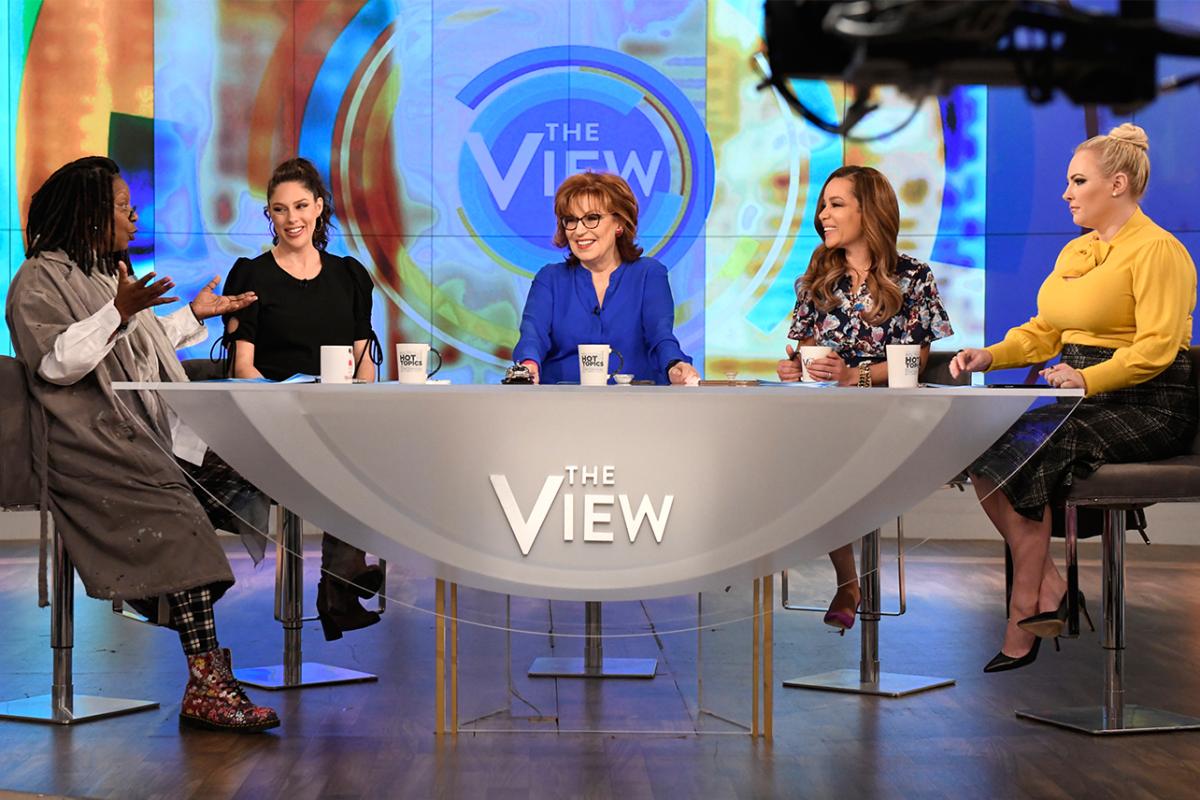 There are just some things you can’t make up, and at no time is that more obvious than when ABC’s The View is on the air. The show features an all-female panel of outspoken, sure-of-themselves women who make it their jobs to be at odds with one another during the broadcast, leaving viewers and audience members noticeably uncomfortable at times.

RELATED: Whoopi Goldberg Goes Off on Angry Tirade During Live Broadcast of ABC’s “The View”

And though uncomfortable exchanges and odd behavior from some members of the panel has become almost commonplace on the show, behavior exhibited by the show’s moderator, Whoopi Goldberg, on Wednesday might just win the prize for strangest exhibition yet.

Toward the latter part of the broadcast, Ms. Goldberg and co-host Sara Haines discussed last-minute gift ideas for kids at Christmas with a toy expert. Goldberg was noticeably in favor of a kids’ treehouse with which the pair opened the segment. Then the expert introduced interactive books by Echo Dot Kids, impressing both Goldberg and Haines. Following the books, the expert then shared “Big Fat Yarn,” a type of yarn for kids that can be folded into any creation they desire, from stuffed animals to pillows and beyond.

RELATED: Co-Host of ABC’s “The View” Takes a Terrible Tumble, Falls on Her Face on Live TV 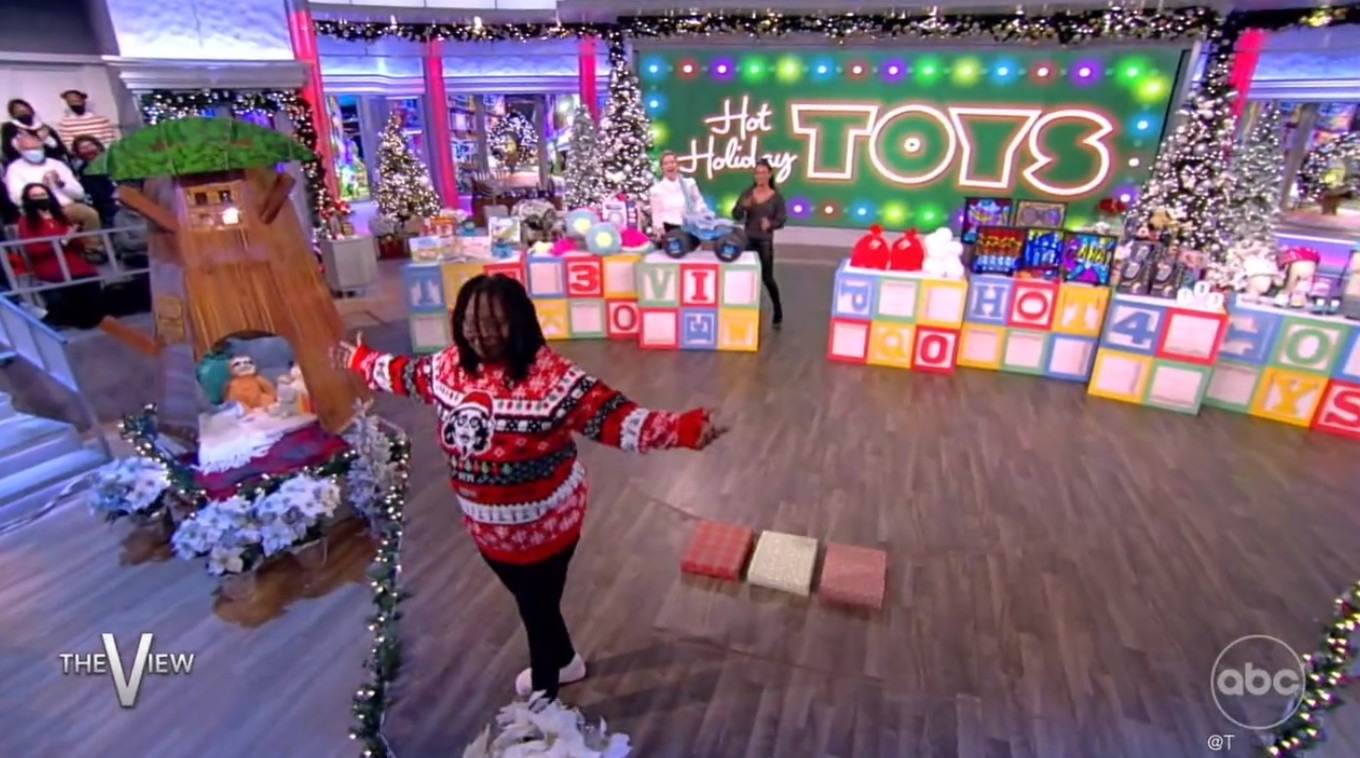 The first oddities began with the yarn, as Goldberg held a piece of it to the back of her head and posed with it. But the craziness was only beginning.

The final toy shared with viewers was a Christmas morning favorite: a remote-controlled truck. Co-host Sara Haines took the controls and began to move the monster truck around the stage after Goldberg admitted she was no good with remotes, but that didn’t keep the moderator from still trying to control the little truck. 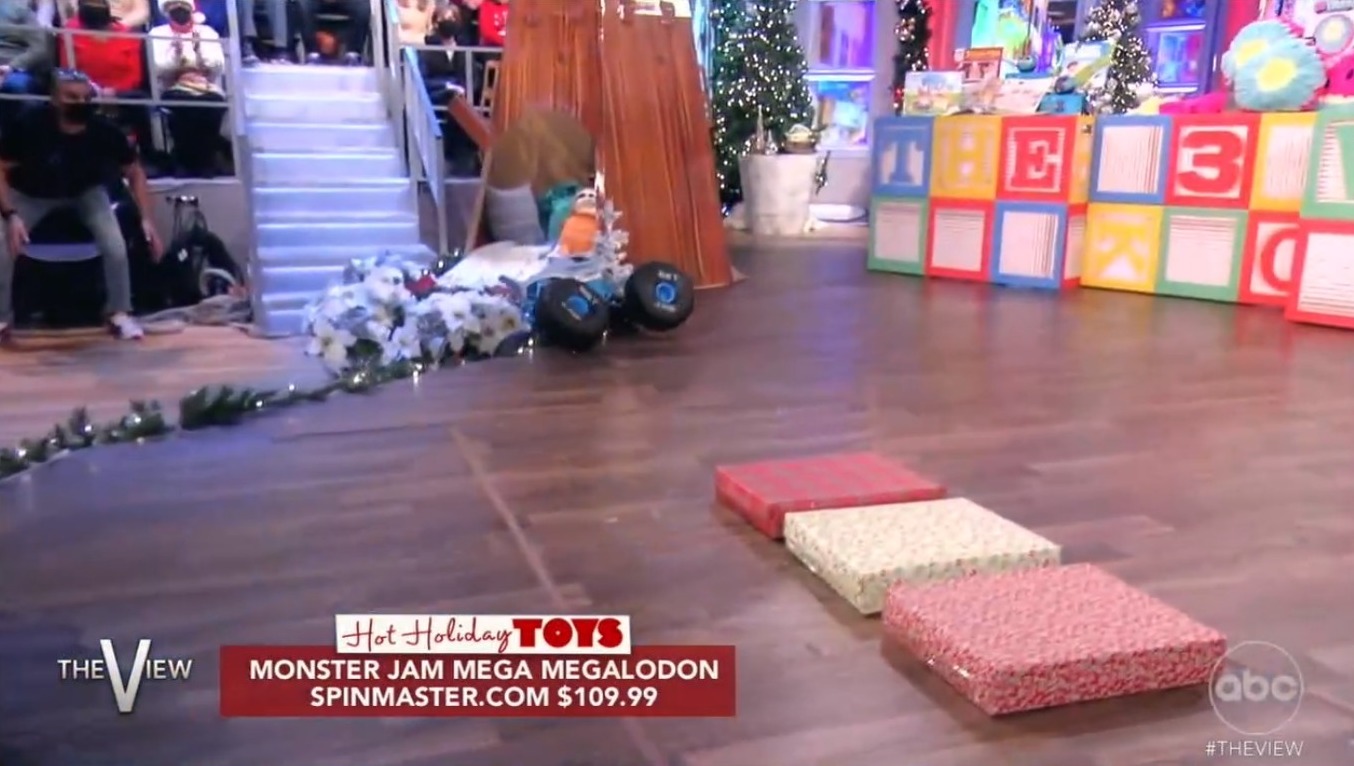 As the toy rolled onto the lower stage on the set of The View, Goldberg could be heard in the background, shouting, “Get over here! Get up here!” at the truck. She then rushed closer to the toy, shouting, “Come here you!”

Goldberg continued on her jaunt around the stage as the truck moved, uttering commands to the little toy, as though the toy could respond to them.

“Oh my goodness, [Whoopi’s] chasing a car around the stage!” tweeted a fan online in response to the moderator’s behavior. Another fan tweeted, “Don’t fall now, Whoopi!” as the 67-year-old Sister Act alum ran around on both levels of the stage.

Goldberg was ultimately unable to grab the little truck, so a crew member picked it up and handed it to Goldberg, after which she immediately dropped it. The crew member was forced to retrieve the toy again and hand it back to Goldberg.