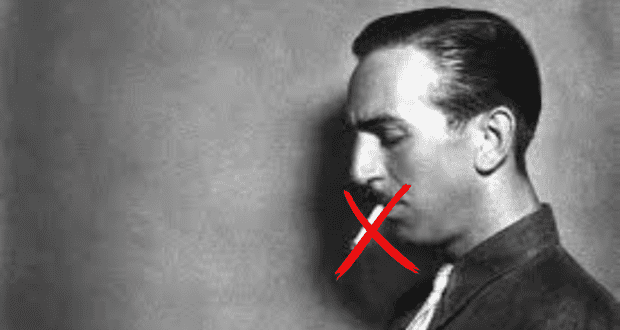 It’s common knowledge that the genius animator responsible for Mickey Mouse, Disney animated classics, and Disney Parks was a heavy smoker. Those who knew him best say that Walt Disney smoked as many as three packs of cigarettes a day. 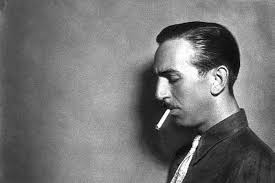 His favorite brand was Lucky Strike.

And now, because The Walt Disney Company has long regarded Walt’s smoking habits as one of the company’s dark secrets, lots of Imagineering has gone into striking that secret from history, keeping Walt’s affinity for tobacco hidden, as evidenced by the plethora of photos online that show Walt with a strange “two-finger point,” but no cigarette. 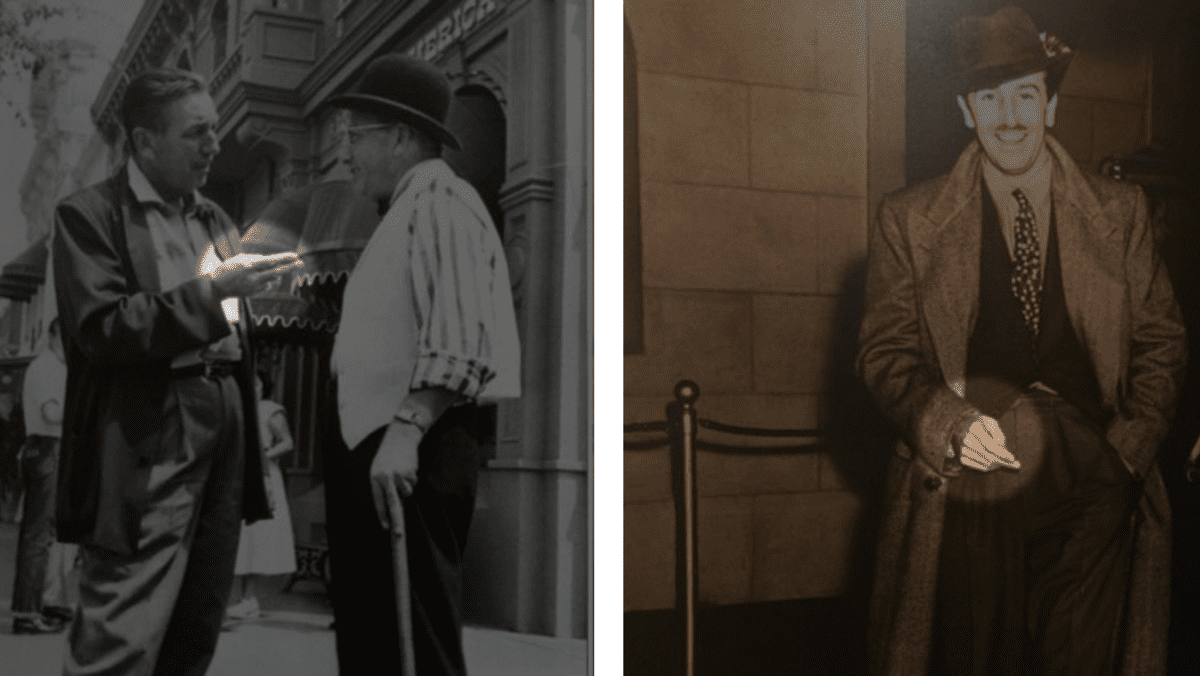 The practice began years ago as the company wanted to keep Walt’s habit a secret from children who visited the Disneyland Resort. Search online for photos of Walt Disney, and you’ll be entertained for hours; there are thousands of photos online of the gifted animator and visionary.

But more importantly, look to see how many of the images include Walt’s cigarette in them. Chances are you’ll find many of them with the cigarette removed from the photo.

But Walt’s disappearing smoking habit is only part of the story; what makes the story a bit strange is that the photos with Walt’s “two-finger point” look somewhat unnatural and out of place. For this reason, the company felt the look of Walt’s point had to be explained somehow. That’s when Disney Parks allegedly began training Cast Members to also point with two fingers.

A touching tribute–or a rewriting of history?

The Walt Disney Company and the Disney empire are so large and their influence so far-reaching, it’s no surprise that Walt Disney and Disney Parks have found their way into many an urban legend over the years. So training Cast Members to point with two fingers so that no one found out about Walt’s habit seemed to fit the description of such a legend.

But in 2015, The Huffington Post published an article in which an anonymous Cast Member confirmed the urban legend was no legend at all.

“The action is seemingly innocuous at first, but it’s apparently a murky tribute to Walt Disney‘s smoking habits, with the company side-stepping around the reason as to why the icon pointed that way.

“Though it’s been long speculated about, [an] anonymous employee was informed by a ‘lead’ that the strange gesture seen from Cast Members at Disney Parks is actually based on Walt’s old smoking habit. This is along with it being considered less rude of a gesture by the company, and that it avoids the stigma pointing receives in other cultures.” 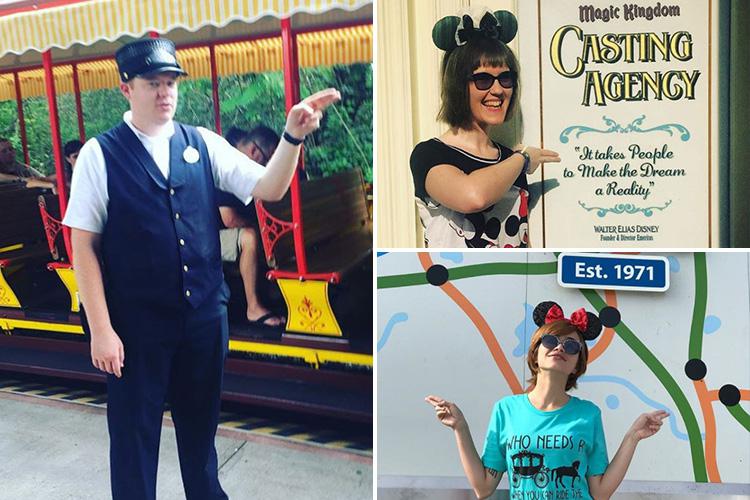 Despite the absence of a confirmation of the practice from The Walt Disney Company itself, the truth about the odd practice of airbrushing out Walt’s cigarettes becomes undeniably evident when fans see photos in which the nicotine is missing, but the smoke remains. (Possibly incomplete Photoshopping?)

The practice was brought to life when Tom Hanks played the role of Walt Disney in Saving Mr. Banks. During an interview with Ellen DeGeneres on the Ellen Show, Hanks confirmed the strange scenario as well. 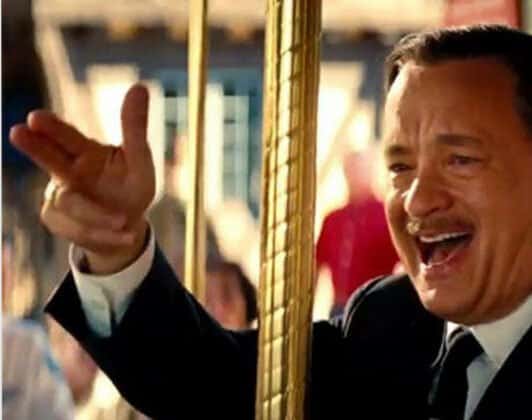 Walt Disney long suffered from a dry, hacking cough. Then, in November 1966, Walt Disney underwent preparations for neck surgery, according to Biography. The procedure was scheduled to take place to address an old polo injury Walt had. But during the pre-procedure x-rays, doctors discovered a tumor on Walt’s lung. Only a month later, on December 15, 1966, Walt Disney died of lung cancer at the age of 65. 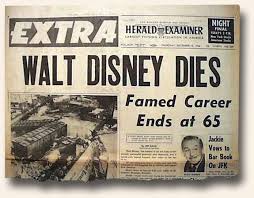 It is understood that Walt’s lung cancer was the terribly unfortunate result of his long history of smoking, making it understandable that the company would want to keep stoic reminders of this sad truth out of the spotlight, especially in light of the fact that during his lifetime, Walt was reportedly very careful not to smoke around children. 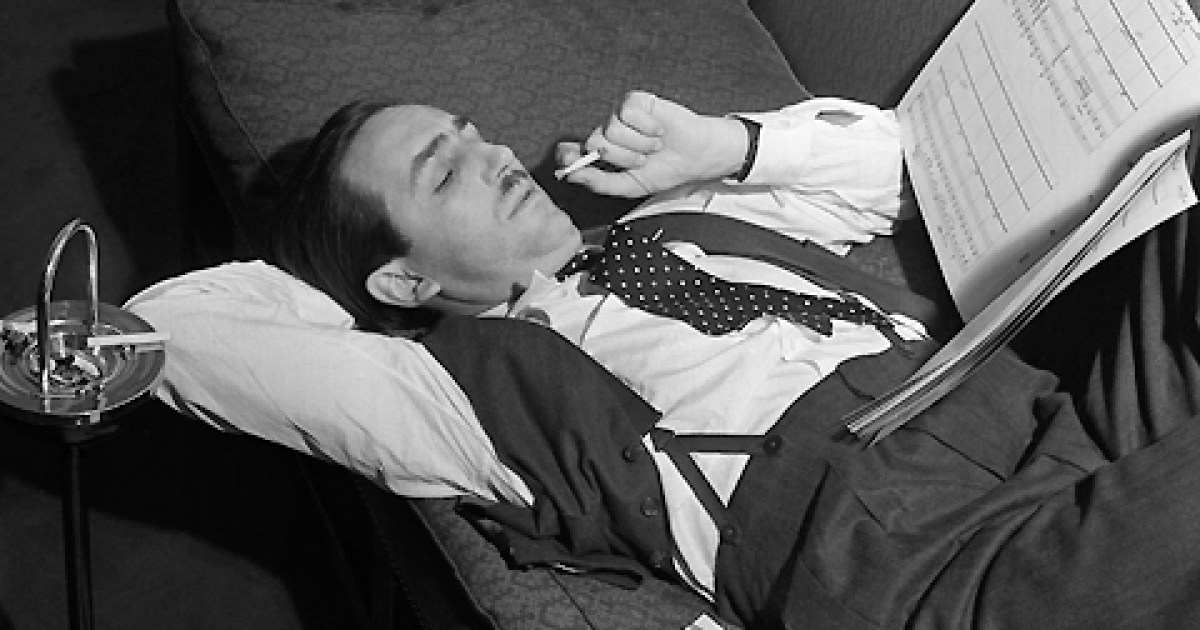 Still, the practice of what some see as “Photoshopping history” has been met with criticism–criticism that ultimately led to a significant change in Disney policy.

In 2014, Joe Rogan posted a photo on Instagram of Walt Disney minus his cigarette. The caption reads:

“Another shot of Walt Disney with his cigarette Photoshopped out. They’ve recently discontinued this policy at Disneyland acknowledging the importance of being honest about cigarettes being the reason he died young.”

In 2007, The Walt Disney Company put into effect a ban on smoking in its films. In a statement, then Chairman and CEO Bob Iger said “We expect that depictions of cigarette smoking in future Disney-branded films will be non-existent.” 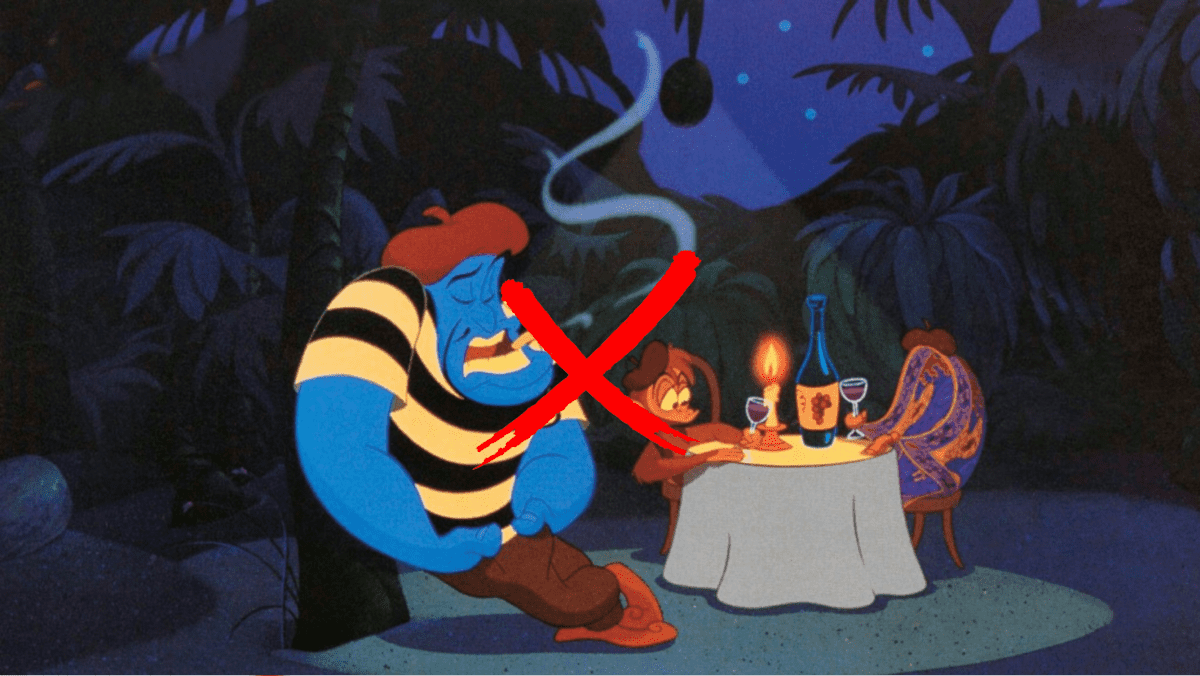 At a shareholder’s meeting in 2015, Iger announced that Walt Disney Studios would “prohibit smoking in movies across the board: Marvel, Lucas, Pixar and Disney films,” saying the policy “was the right thing for [Disney] to do.”

Saving Mr. Banks only features a singular unlit cigarette in one scene of the film, but it still doesn’t depict Walt Disney smoking. The scene only shows Tom Hanks as Disney stubbing out a cigarette as Ms. Travers, played by Emma Thompson, steps into his office. Even so, the scene does not show a cigarette or the smoke from a cigarette.

The Disney+ streaming platform has incorporated content warnings since its inception in 2019, one of which is related to tobacco use. The content warning that reads, “contains tobacco depiction” carries through The Walt Disney Company‘s commitment to “helping parents raise healthy, happy children.” As such, Disney content that features characters smoking cigarettes, cigars, or pipes–and in the case of the caterpillar in Disney’s Alice in Wonderland, a hookah–also features a tobacco warning before the streaming content begins. 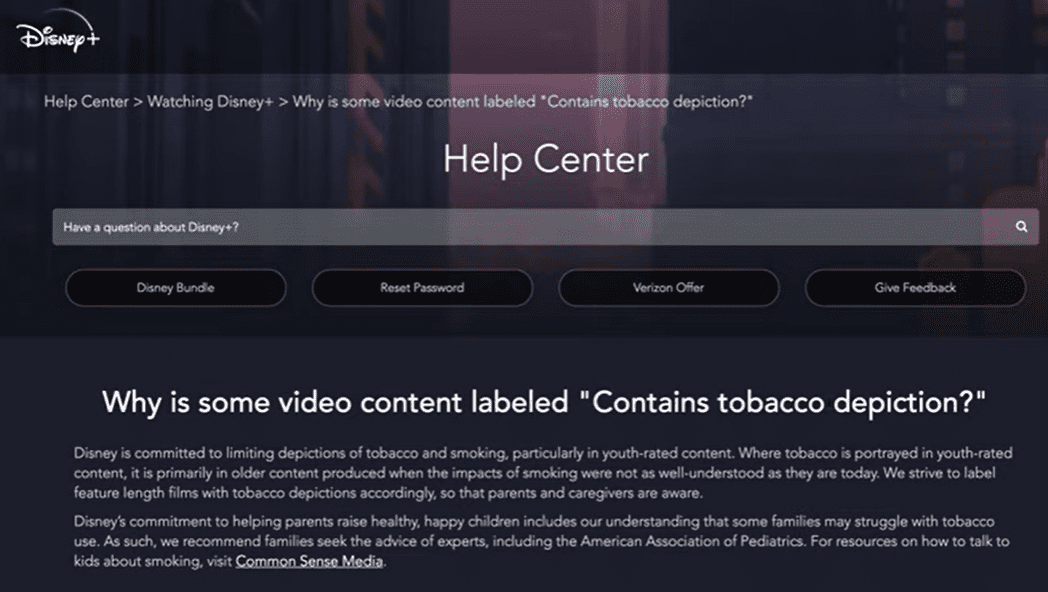 It reads as follows:

“Disney is committed to limiting depictions of tobacco and smoking, particularly in youth-rated content. However, tobacco use is sometimes portrayed, primarily in older films that were produced when the impacts of smoking were not well-known. We strive to label any feature-length films with tobacco depictions so that parents and caregivers are aware.

“Disney’s commitment to helping parents raise healthy, happy children includes our understanding that some families may struggle with tobacco use. As such, we recommend families seek the advice of experts, including the American Association of Pediatrics. For resources on how to talk to kids about smoking, please visit Common Sense Media.”

So while Walt’s death will always remain tragedy in the hearts and minds of Disney fans of all ages, perhaps all is not in vain, as the company used it as motivation to keep the depiction of tobacco as far removed from its youngest fans as possible. And we think Walt would be very pleased with that decision, indeed.

2022-05-01
+Becky Burkett
Previous: Here’s What’s New on Disney+ This Month
Next: TRON Could Be Preparing to Open Soon Based On New Permits Filed