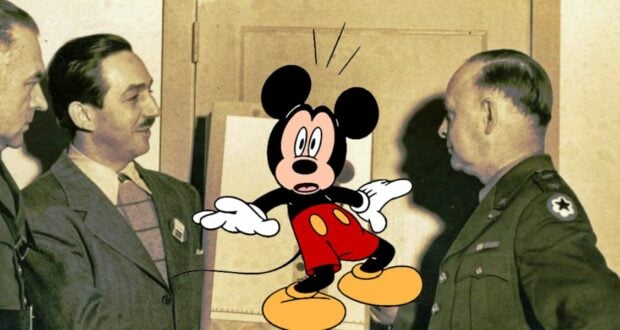 Walt Disney Created a Gas Mask, and It’s as Creepy as You’d Expect

Typically when we talk about Walter Elias Disney, the focus surrounds the stunning completion of Disneyland Resort in Anaheim, California, and the brilliant vision for Walt Disney World Resort in Central Florida. But did you know Walt first challenged himself to create a gas mask?

When thinking of Walt Disney, we can’t help but think of his incredible dreamer mentality that skyrocketed for other dreamers around the globe when Disneyland Resort first opened in 1955. But, before Guests enjoyed the magic Walt and his team created, Walt tasked himself with a gas mask challenge. He worked to create a gas mask for children.

With the nation under much uncertainty, Walt went to Washington to meet with civil defense and chemical warfare officials in January 1942, the month after the Pearl Harbor attack.

According to The Washington Post, Walt Disney was there to “check the progress of a gas mask he’d designed. With large glass eyes, a snout, and big, round ears, the mask was shaped like Disney’s signature character: Mickey Mouse.”

What was Walt’s focus on creating a Mickey Mouse mask for a respirator?

Fearful of a gas attack during WWII, New York Mayor Fiorello LaGuardia, who was the Director of the Office of Civilian Defense, proposed the government order 50 million gas masks. “The masks would cost $3.75 each and would be supplied in five sizes — one for babies, one for children 2 to 3 years of age, one for larger children, another for small adults and the ‘universal adult mask.’” These masks were to be issued to United States people living in coastal areas more prone to attacks.

Additionally, many children around the globe were issued a respirator that they would carry around with them. Walt specifically wanted a Mickey Mouse mask to provide some sense of calm for a child during an uncertain time by creating special Mickey Mouse-themed gas masks.

RELATED: After Being Neglected for 30 Years, Walt’s Plane FINALLY Finds a New Home

Production began on Walt’s Mickey Mouse gas mask. Roughly 1,000 of Walt’s respirators were created, but they were reported as “not really a notable presence on the home front during World War II.”

It’s no secret that Walt Disney truly hopes to take families and children away from their everyday stresses and fears. One of his most famous quotes when speaking of theme park construction was, “I don’t want the public to see the world they live in while they’re in the Park (Disneyland). I want to feel they’re in another world.”

From gas masks to theme parks, Walt seemingly always had the heart and desire to seek the magical moments precious to people, even in the height of such uncertain times as World War II.