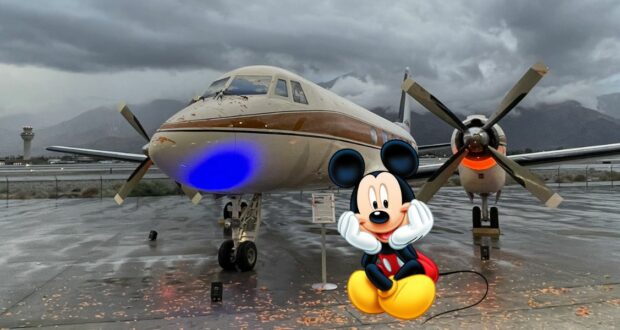 After Being Neglected for 30 Years, Walt’s Plane FINALLY Finds a New Home

Walt’s plane may be done taking to the skies, but it has made a comeback with a new home for Disney fans, young and old, to enjoy.

What’s so special about a plane, you ask? Purchased by Walter Elias Disney in 1963, Walt’s Grumman Gulfstream G-159 airplane was used to plan Walt Disney World Resort, the World’s Fair of 1964–65, and three decades of other Walt Disney Company projects. The plane was nicknamed “Mickey Mouse One.”

Sadly, the plane sat neglected for 30 years after its last flight in October 1992 when it landed on World Drive, the highway beside Disney-MGM Studios theme park (now Disney’s Hollywood Studios). It was moved around on the Walt Disney World Resort property to its most recent spot of neglect, near Disney’s Animal Kingdom Park.

To the surprise of many fans, Disney announced it would have a special exhibit at the 2022 D23 Expo from September 9-11, 2022, called “Mickey Mouse One: Walt’s Plane,” where the plane would be on display to D23 Expo Guests.

Walt’s plane was cleaned up and transported to the Anaheim Convention Center in California just before the Expo. It was a popular exhibit as Disney fans flooded in to lay eyes on the plane Walt rode in to help plan the massive project we all know and love as Walt Disney World Resort.

Great news, as we have learned that Walt’s plane is done with its years of neglect! The plane is now on public display on an indefinite loan by the Walt Disney Company to the Palm Springs Air Museum in California.

Why the Palm Springs Air Museum for Walt’s plane to be on display? It’s really a homecoming story!

According to Frommers, “Walt Disney and his family owned two homes in the city. The first one was sold to fund the construction of Disneyland and the second was purchased in 1957 once the park proved to be a runaway financial success.”

“The plane also made frequent flights to Palm Springs carrying Walt Disney and his family. A log book from Disney’s pilot, Chuck Malone, shows that Mickey Mouse One’s first flight to Palm Springs—using the same airport the Air Museum is now a part of—occurred on December 7, 1963, just two days after the Disney company received final delivery of the aircraft in California.”

Next time you’re in the Palm Springs, California area, be sure to drop by Palm Springs Air Museum to see the plane that Walt himself used to provide us with the magic Walt Disney World Resort is today.