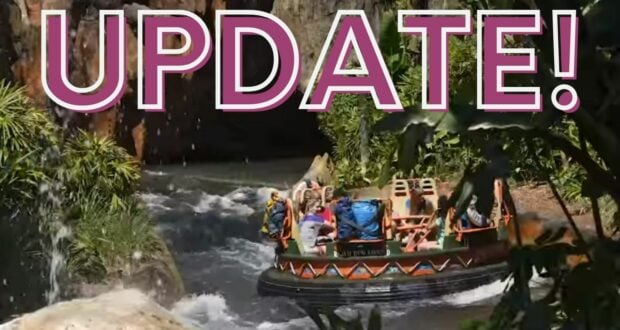 UPDATE: Well, is it opening or not? Disney sends mixed signals about the opening of Kali River Rapids at Animal Kingdom

*This is an update to the news we brought you this morning about the planned reopening of the Kali River Rapid attraction at Disney’s Animal Kingdom. Because of the nature of refurbishments, planned closures, and scheduled maintenance, these times and dates can (and do) change from time to time.

Only this morning, we brought you the news that Disney had switched its planned reopening date of Kali River Rapids from sometime in the middle of December to January 3 of next year. Well, hold on to your hats because the info has changed once again, and now, at this moment, according to the calendar on Disney World’s website, the attraction–at least for right now–is scheduled to be open beginning December 16, 2021, although times for the attraction vary with the park hours for the day. (Again, that’s barring any further changes!)

Perhaps Anandapur was tossing around ideas about whether to keep its borders closed longer or to reopen them sooner. Tourism may be down, so they’ve decided to open their borders earlier than expected? We aren’t sure. (Darn this pandemic!) 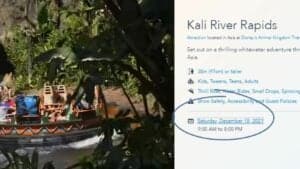 But on January 3, 2021, the day we had recently been told would mark the opening of the Kali River Rapids attraction after its scheduled closure, the attraction will open later and close earlier, from 10:00 a.m. to 7:00 p.m. 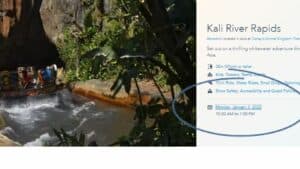 If any further changes to the opening are made and announced, we will update you yet again! Here’s hoping whenever it opens, that you get to enjoy it with your friends and family, whether during the holiday season or into next year!

2021-12-06
+Becky Burkett
Previous: Disneyland After Dark Returning In 2022!
Next: This Christmas film-themed cave home booked solid just after opening to public, so we just had to take a look inside!