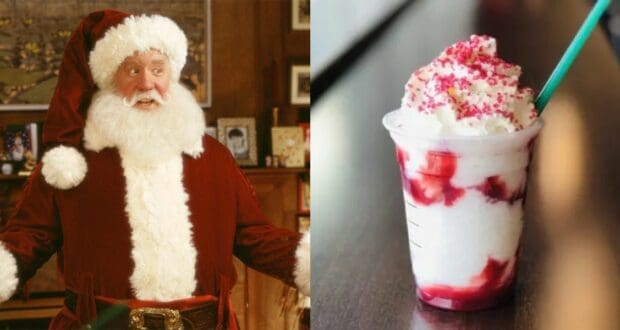 It’s beginning to look a lot like Christmas! With the holidays upon us, Disney fans are out and about visiting the theme parks, shopping, and dining during this most wonderful time of the year.

A visit to Starbucks is always a favorite addition to whatever holiday festivity the family may be enjoying. Ready to make the experience even sweeter? Check out this secret way to order The Santa Clause Frappuccino at Starbucks.

Despite The Santa Clauses series having been met with some controversy for Tim Allen’s Christian perspective and use of “Merry Christmas,” the popularity of the Disney+ series continues to grow.

RELATED: Tim Allen’s Family “Mad” at Him During Visit to Disney Park

Ready to watch The Santa Clause films or series this holiday season? There is a way to order a Santa Claus Frappuccino from the Starbucks “secret menu.”

Keep in mind the Starbucks secret menu means this item won’t be available on the usual Starbucks menu. Instead, you’ll need to ask your Starbucks barista to create the delicious secret menu drink with the following steps created by TotallyTheBomb.

Don’t forget to tip your barista well for making the extra special drink.

How to Order a Santa Claus Frappuccino at Starbucks

You’ve created the perfect Starbucks Frappuccino, which tastes like a Strawberry Shortcake dessert… all inspired by Disney’s The Santa Clause films and series.

Do the kiddos want their own Starbucks Santa Claus Frappuccino? No worries! When using the above steps, this Starbucks drink does not contain any coffee.

2022-11-27
Jamie Sylvester
Previous: Bob Iger’s Plan is to Oversee the Sale of Disney to a Larger Corporation, but NOT to Apple
Next: Destructive Fire Erupts at Walt Disney World Resort