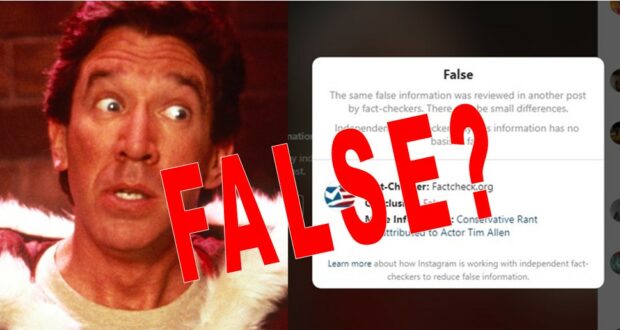 Well, we were thrilled to share the big news that Tim Allen will be reprising his role as Santa Claus for an upcoming Disney+ series. Now, we’re seeing the name “Tim Allen” is causing one social media account to be tagged for “False Information”.

Disney+ made the big announcement that a new The Santa Clause series will be coming to Disney+. The filming is scheduled to begin in March and will be set after the trilogy of The Santa Clause films. We’ll once again have a chance to see Scott Calvin (played by Tim Allen) as he will soon be celebrating his 65th birthday. Santa begins realizing that he can’t be Santa forever. Scott sets out to find a suitable replacement Santa while preparing his family for a new adventure in life south of the pole.

RELATED: Tim Allen’s Family ‘Mad’ at Him During Visit to Disney Park

We’re thrilled to hear about the new series and can’t wait to cover more details as The Santa Clause series information break. Nevertheless, the news has caused Disney+ Instagram to be noted with “False Information” as shown in the screenshot below:

The post, which is blurred out, is noted with, “False Information: The same information was reviewed by independent fact-checked in another post.” When you click “See Why” this is the message the viewer receives:

The Fact-Checker pulled the post as “False” with this conclusion due to the “Conservative Rant Misattributed to Actor Tim Allen”.

Apparently, a conservative rant circulating on social media has been falsely credited to the actor Tim Allen. According to FactCheck.org, “A post shared by thousands of Facebook users begins, “Tim Allen is credited with writing this,” and includes a photograph of the actor and comedian. The post includes several conservative viewpoints, such as, “We are one election away from open borders, socialism, gun confiscation, and full-term abortion nationally,” and “I am grateful that Hillary Clinton is not the president of the United States of America.”

The report goes on to note that “It also makes false claims about Chelsea Clinton, Rep. Alexandria Ocasio-Cortez and “the Obamacare website” that have already been debunked. However, there is no evidence that the right-wing rant was written by Allen, and his publicist told us he didn’t author it. “The statement you are referring to was not written by my client,” Allen’s publicist, Marleah Leslie, told us in an email.“

The posts never came from or were posted to Tim Allen’s Facebook or Twitter accounts. Allen, the voice of Pixar’s Buzz Lightyear in the Toy Story film franchise, is openly a conservative who has described himself as “kind of an anarchist” who is for whatever “political party is for more responsible use of our money.”

We’ll be curious to see if Disney+ Instagram will find another way to post it to its social media network? Or is the name “Tim Allen” just too conservative for Instagram followers?