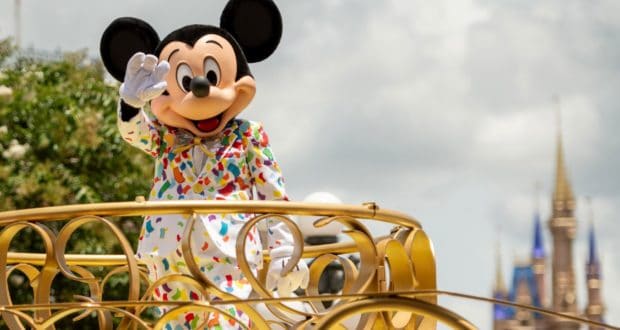 It’s that time of year again – time to gorge ourselves on turkey, reach for an extra slice of pumpkin pie, and think about what we’re thankful for (which might just include that delicious turkey and pumpkin pie).  While you’re going about your Thanksgiving plans this year, why not think about a few things you’re thankful for about Walt Disney World?  Disney fans might find it nearly impossible to narrow down the list, so here are a few to get you started!

We know that our sense of smell is the sense most strongly associated with memory, which is why we’re thankful for all of Walt Disney World’s magical smells (and why we’re forever trying to capture them and bring them home to trigger our favorite WDW memories whenever we want).  Every Disney fan undoubtedly has a list of favorite whiffs throughout the parks and resorts.  Whether it’s the glorious aloe and clover scent that permeates several of the deluxe resorts, the smell of the water on dark rides like Pirates of the Caribbean, or the intoxicating scent of Magic Kingdom’s Main Street Bakery, these signature smells can immediately bring to mind our most memorable WDW moments.

Ask anyone what the best pool complex at Walt Disney World is, and invariably, the answer is the same.  This is why we’re thankful for the incomparable Stormalong Bay, the pool complex shared by Disney’s Yacht and Beach Club Resorts.  If you haven’t yet had the pleasure, here’s what you’re missing: more than three acres of water-park-esque fun, including a shallow beach area with actual sand, a lazy river (grab a tube and float away!), and a huge open swim area featuring waterfalls and hot tubs.  Oh, and we can’t forget the enormous shipwreck, with two waterslides. Needless to say, there’s a ton to be thankful for at Stormalong Bay!

If you’re a Star Wars fan (or live with one), then you’ll understand why Star Wars: Galaxy’s Edge made it onto our list of things we’re thankful for at WDW.  This massive new land themed as Black Spire Outpost on the planet Batuu is the most immersive experience on property (and also the most immersive in the history of Disney parks).  It looks, sounds, and feels like a planet in a galaxy far, far away, and it’s full of details and opportunities that will make your inner Yoda do backflips.

We’re thankful for Walt Disney World’s complimentary transportation system in general, and specifically, the WDW Monorail System.  It’s air-conditioned, affords absolutely spectacular views of Walt Disney World, and allows you to easily resort-hop from one deluxe resort to another on the resort line.  You can even relax on board as you travel through the Contemporary Resort itself.  It’s one of our favorite ways to get around WDW.

The legendary customer service provided by cast members in all areas of Walt Disney World is impeccable, and – take it from someone who has traveled the globe – unrivalled world-wide.  We’re thankful that cast members go out of their way to ensure that each and every guest has a magical experience, and the attention to detail and care for every aspect of the guest experience is a major reason Disney has become known as a model of customer service.

Anyone who’s ever visited Walt Disney World knows it’s not just for kids.  However, it does make an adult FEEL like a child again, and for that, we’re very thankful!  It’s so important to be able to take a step back from our hectic lives, and be able to experience the pure joy waiting for us in every corner of the parks.  We’re so thankful for the gift of feeling like kids, every time we set foot in WDW!

7. Vacations for All Budgets

We’ve visited Walt Disney World for years, during times when money was tight and we stayed in a value resort, and years when we had a little extra to spend, and could splurge on a deluxe resort.  We’re thankful that WDW has a variety of park tickets, resorts, and vacation plans to cater to the budget of each and every family, so that everyone has a chance to enjoy the magic!

Saying that 2020 has been a tough year would be the century’s biggest understatement. Amid this year’s tragedies and ongoing pandemic, we could all use a little more magic in our lives.  And this is why we’re thankful that despite COVID-19, Walt Disney World is open for guests to enjoy!  More importantly, we’re thankful for the painstaking care that Disney has taken to update their cleaning procedures, ensure physical distancing, and alter experiences to reduce contact, to make WDW a safe place for both cast members and guests.

If we’re giving thanks, we have to include the magical wizards behind everything Walt Disney World.  Without the creative talent of Disney’s amazing Imagineers, who continue to bring us brilliant new attractions, theme park areas and resorts year after year, WDW wouldn’t be what it is today!  So, thank you, Disney Imagineers, for bringing the magic to life for guests every single day – and here’s to many, many more years of magic!

10. Creating a (Disney) World of Belonging

We’re thankful that Walt Disney World always endeavors to change with the times, and to remain relevant in a dynamic world.  Even though these changes aren’t always easy, especially for fans who are used to enjoying attractions or movies a certain way, we love that Disney is committed to telling stories and creating experiences that focus on diversity, inclusivity, and real change.  We’re thankful for a Walt Disney World in which each and every guest can feel they belong!

2020-10-28
Stacy Milford
Previous: Why This November Might Just Be the BEST Time to Visit Walt Disney World
Next: Disney Encourages “Make Your Voice Heard”: VOTE with Four Themed Images