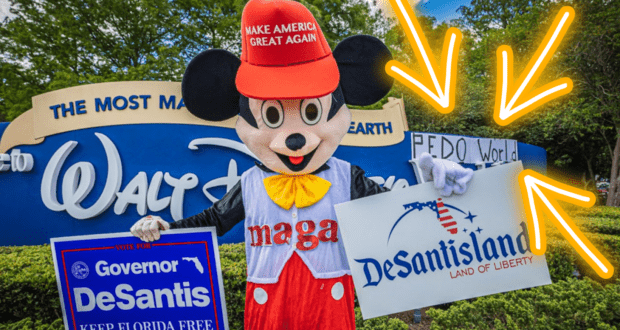 Over the weekend, protesters showed up at an entrance to the Walt Disney World Resort to hold demonstrations against Disney’s recent stance on Florida’s “Parental Rights in Education” bill, which was signed into law by Florida Governor Ron DeSantis on March 28.

Some of the demonstrators, however, have taken their dislike for Disney’s stance to another level, accusing the Walt Disney Company of promoting pedophilia in its parks.

According to The Independent, a rally took place just outside the gates of the Walt Disney World Resort on April 16. The rally featured a costumed Mickey Mouse who donned a MAGA shirt, as well as a hat that read “Make American Great Again.” Others in the group of protesters held signage that promoted Governor DeSantis and “DeSantisland,” while some held signs that called for their children to be left alone. 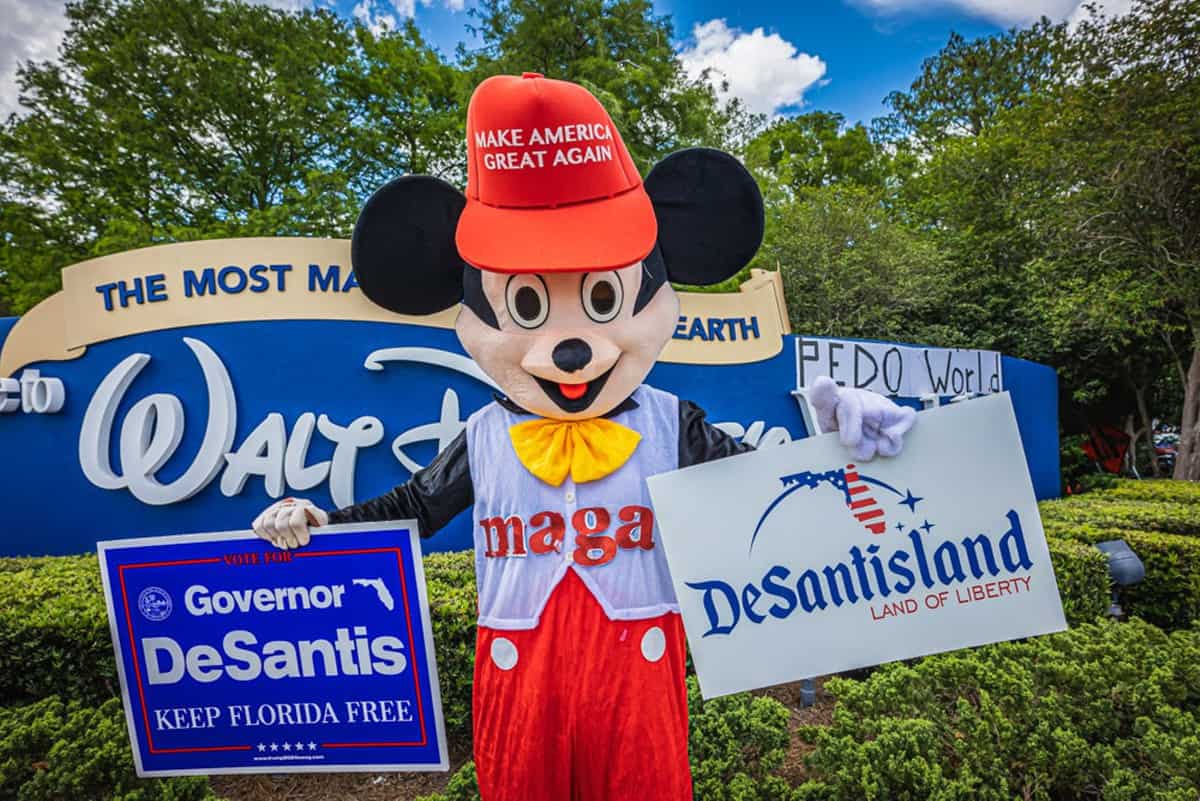 One handwritten sign read, “It’s not about homosexuality or heterosexuality; stop promoting sexuality to our children, period. Let them be kids.” 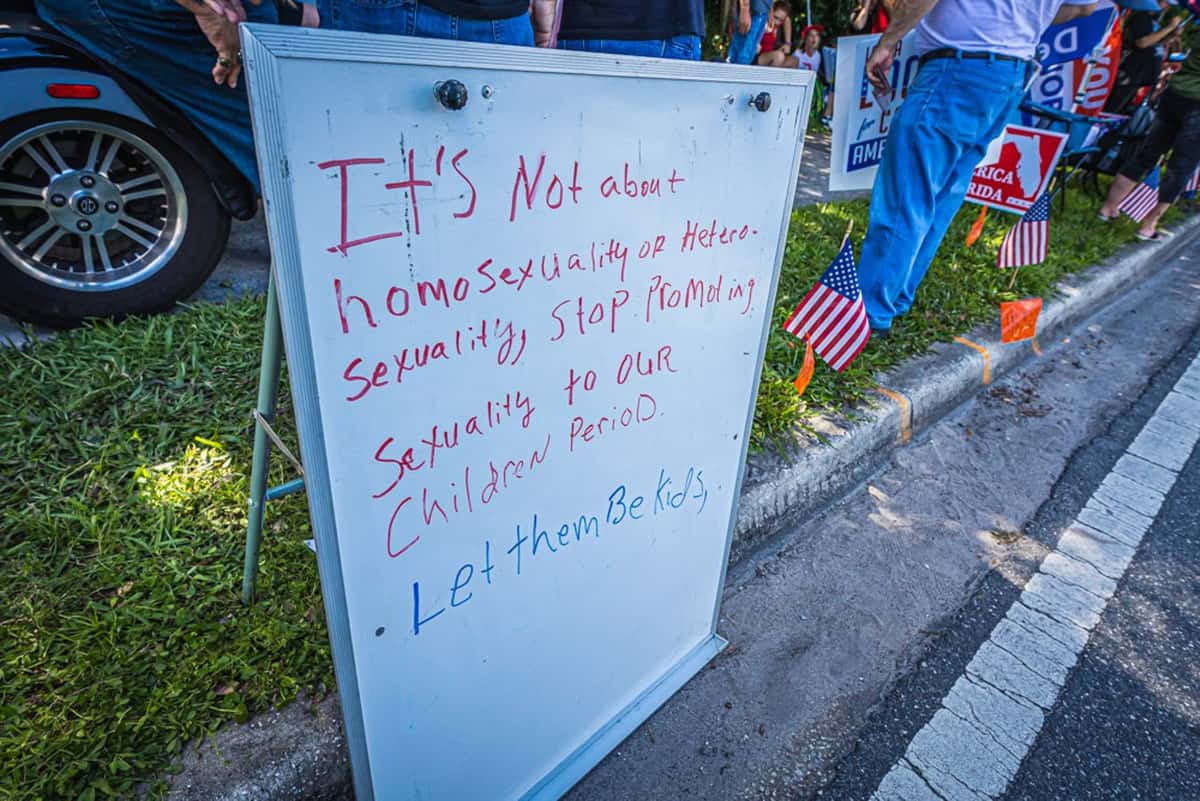 Some of the protesters pinned a large sign on the Walt Disney World entrance sign with the words, “PEDO WORLD” taped onto it. The sign was later ripped down by a passer-by, and photos from the rally seem to depict a Sheriff’s officer on the scene assisting in removing the signage from Disney’s property. (The first photo is grainy because of the resolution of the Twitter video.) 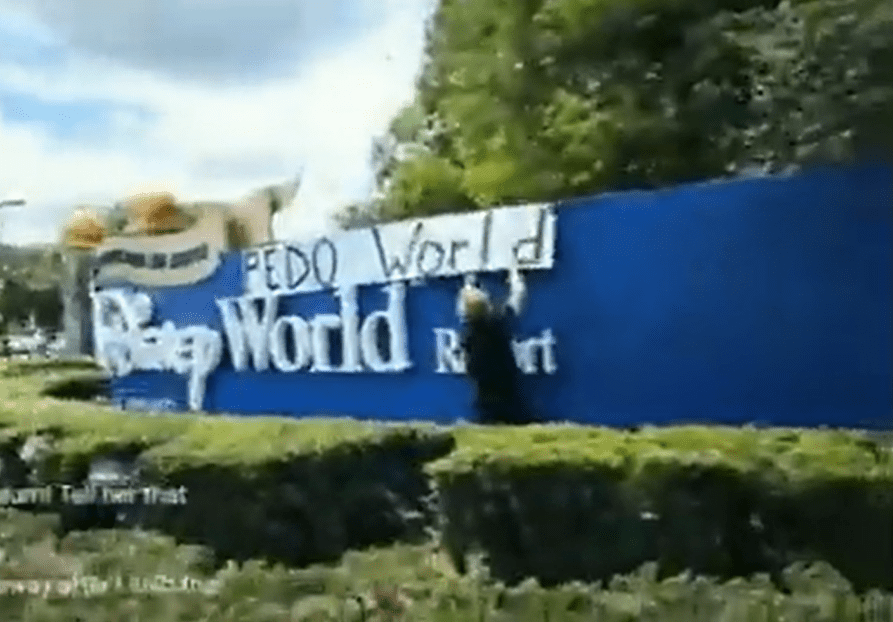 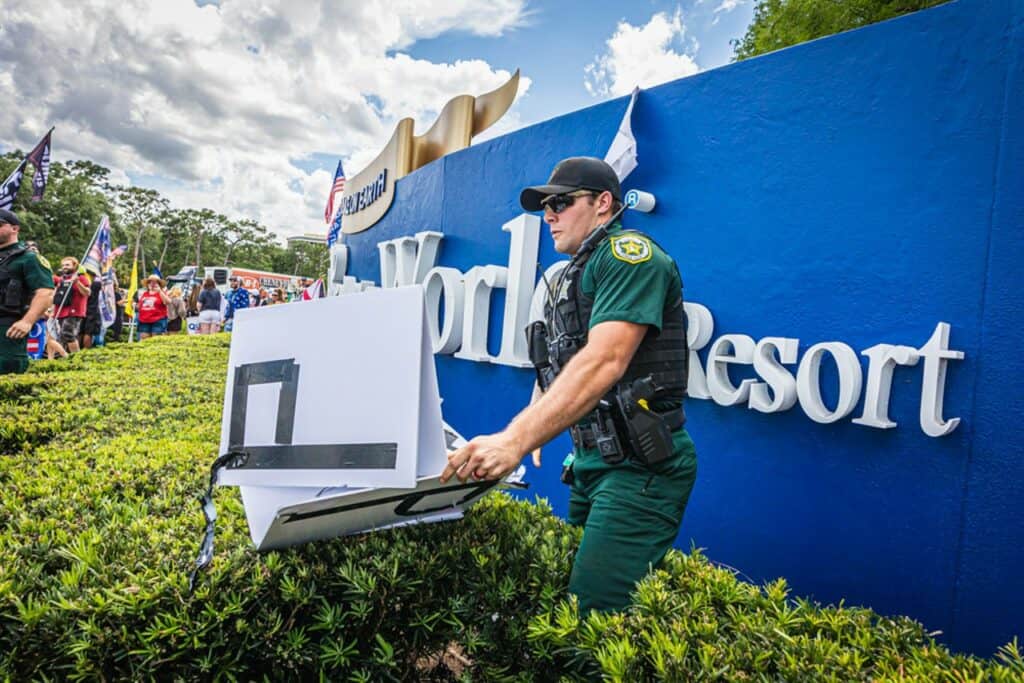 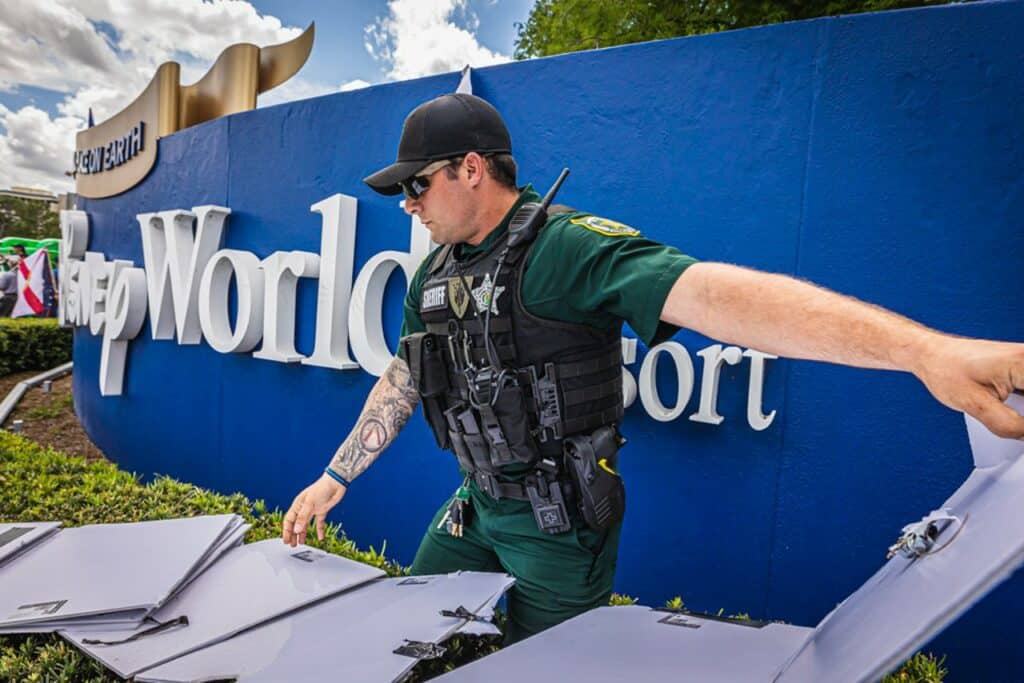 The group reportedly called itself a “Patriot Convoy,” a nod reminiscent of the trucker protests that took place weeks ago in protest of COVID-19 restrictions. The “convoy” had planned a “blockade” at the park entrance, seemingly in an attempt to deter Guests from entering the Walt Disney World Resort, but the deterrent was unsuccessful, given that there are multiple gates into the Resort property. 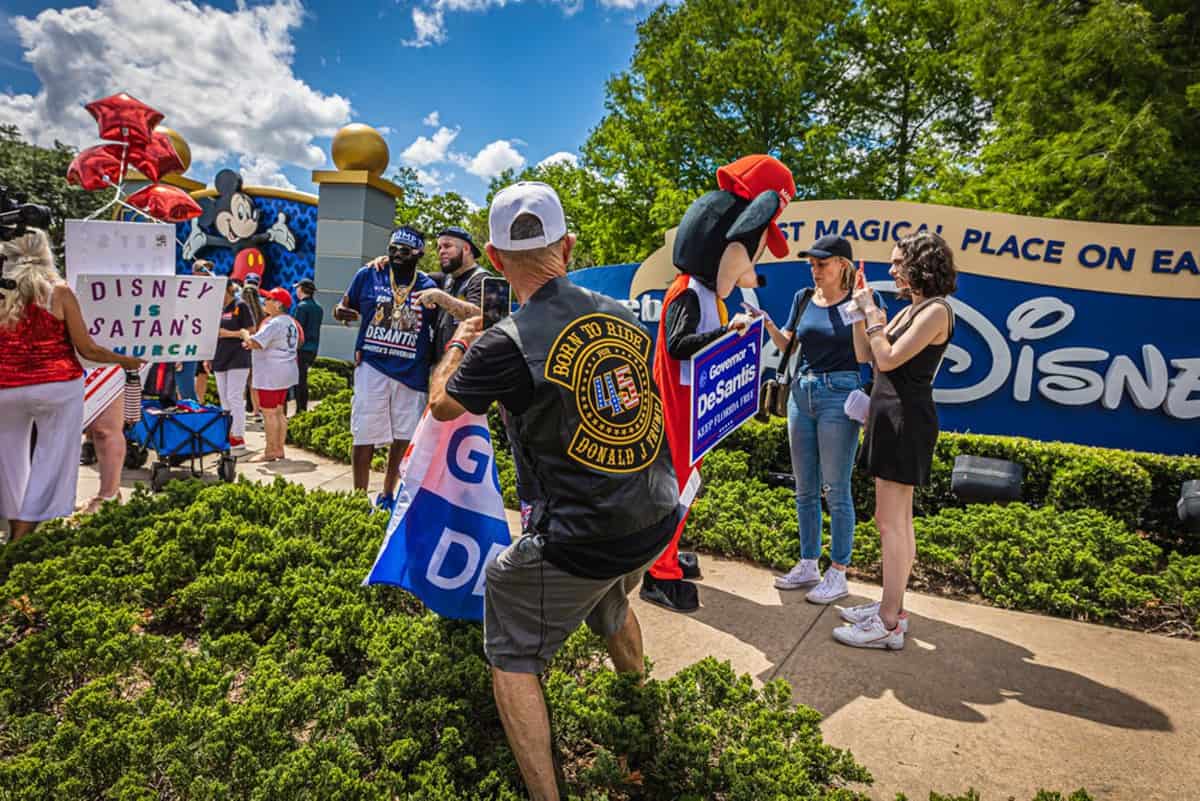 Florida’s “Parental Rights in Education” bill has been a topic of discussion for weeks.

When the bill was introduced, it was met with opposition, and the opposition only grew. Disney CEO Bob Chapek was silent on the issue, spurring many of those opposed to the bill to demand a response from Disney: a condemnation of the bill completely.

Chapek ultimately made The Walt Disney Company‘s stance public, condemning the bill and condemning the actions of those who drafted it. Chapek continued by announcing a cessation of political donations so long as the bill stayed on the table. 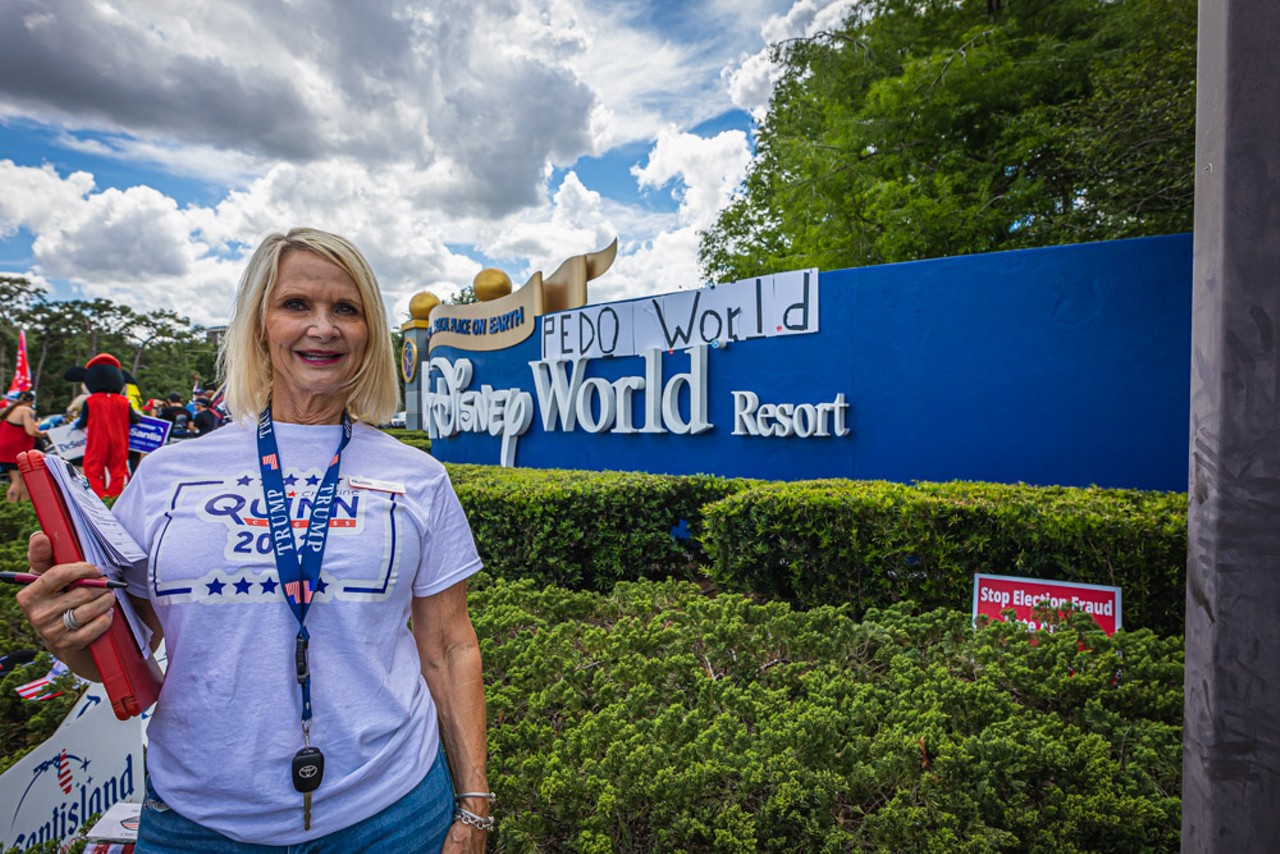 Florida’s “Parental Rights in Education” law prohibits classroom instruction about sexual orientation and gender identity in Kindergarten, first, second, and third grades, but it does not prohibit casual discussion or conversation about sexual orientation or gender identity. It also does not prohibit the use of the word “gay,” despite the name given to it by those who oppose it: Florida’s “Don’t Say Gay” bill.