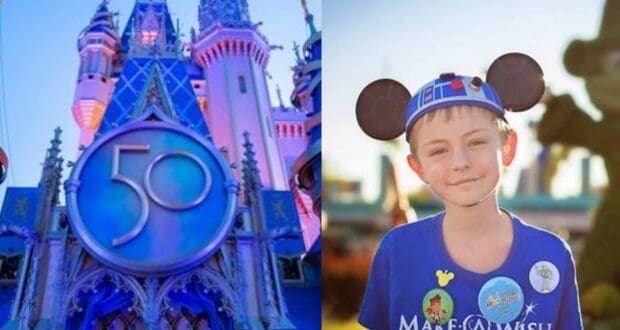 “The World’s Most Magical Celebration” honoring Walt Disney World’s 50th Anniversary begins in less than a month. On October 1, 2021, we’ll have a chance to enjoy the festivities with Disney for their full 18-month celebration. From new nighttime spectaculars like “Disney Enchantment” and “Harmonious” to a new EPCOT attraction, and everything in between – it’s going to be a grand time to be in around the Walt Disney World property! And now, if you’re a Florida car owner, you can celebrate wherever you’re driving through with a new, first-ever Walt Disney World license plate now available.

As reported by Orlando Sentinel: “The new Florida specialty license plate has made it into production is available statewide. The new tag that features the Walt Disney World 50th anniversary logo with Cinderella Castle raises funds for the Make-A-Wish Foundation of Central and Northern Florida. It was one of 33 new potential specialty license plates for the state that already has more than 120 on the road. To be put into production, though, it had to meet a minimum preorder threshold as outlined in the 2020 bill passed by the Florida Legislature.”

With presales beginning last October, Disney made its 3,000 preorder requirement and continued to glean more preorders – more than 10,000 as of Sept. 1, ahead of its availability across all 67 of the state’s tax collectors’ offices.

If you’re an interested Florida registered car owner you can purchase the Disney license plate for a $25 fee plus applicable state administration fees exclusively through their local County Tax Collector’s Office, license plate agencies (DMVs) across the State of Florida, or online through the Orange County Tax Collector’s Office. Happy celebrating Walt Disney World Resort’s 50th Anniversary both at a Disney Park and while you cruise around Florida!