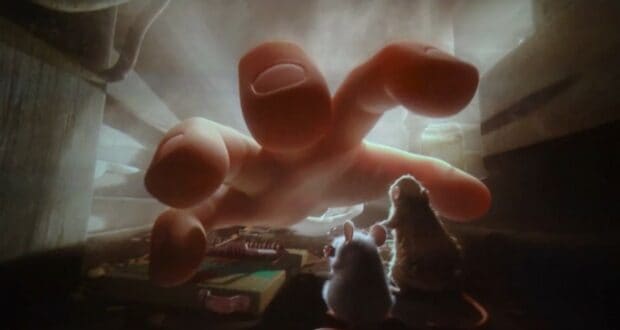 EPCOT’s Remy’s Ratatouille Adventure is a “Culinary Journey” for the whole family! While the attraction doesn’t officially open to the public until October 1 (Disney’s 50th Anniversary celebration), today (September 3), we are at a Media Event to experience the new attraction and the surrounding newly expanded France Pavilion. We previously shared a walk-through video of Remy’s queue. Now, here are a few photos as shared by Disney of the actual Ratatouille ride!

Disney Parks Blog provides a closer look at the new ride: ” Remy’s Ratatouille Adventure is a family-friendly attraction where Guests feel as if they shrink to the size of a rat and race through Gusteau’s restaurant, joining the “Little Chef” in creating a culinary masterpiece. The attraction’s entrance, located at the end of the pavilion’s new plaza, looks like a Parisian theater and features a classic marquee with hand-laid gold leaf and nearly 200 lights.”

“After entering the theater, Guests eventually find themselves on the rooftops of Paris where Gusteau invites them to join Remy for a special meal the “Little Chef” is creating. They board colorful rat-shaped vehicles and then don 3D glasses to begin their adventure, seeing everything from a “rat’s-eye view.”

“Imagineers worked with Pixar artists to create animated 3D scenes that feel as if the film has come to life right before Guests’ eyes, blending with oversized sets to provide an immersive environment full of sights, sounds, smells, and other effects celebrating “Ratatouille.”

“From falling through a skylight to scurrying through Gusteau’s kitchen to hiding out in the restaurant’s pantry, Guests feel as if they’re right alongside Chef Remy. At times they may dodge a mop, avoid being trampled by giant feet, or marvel at massive pieces of food all around them.”

“The trackless vehicles travel in groups of three and move forward and backward while spinning, tilting, and bouncing along as the rats (ride vehicle) scamper from one scene to the next. Depending on which vehicle Guests board, they may take a slightly different path through the attraction and notice new details if they experience Remy’s Ratatouille Adventure multiple times. Characters speak in a blend of English and French, adding to the overall authenticity of the France pavilion.”

Anyone else eager to experience this Remy’s Ratatouille Attraction for the grand opening on Disney World’s 50th Anniversary? We’ll have a full review with more photos and details from the World Showcase as we wrap up our Media Day at the Park’s France Pavilion!