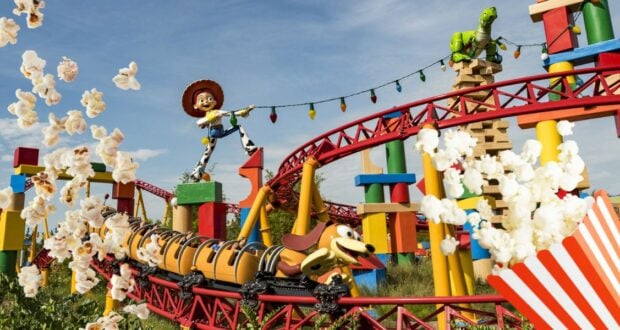 Calling all Disney collectors! We have exciting news as Walt Disney World Resort will soon be releasing a new popcorn bucket for the holidays… with an adorable Toy Story (1995) theme.

Disney is on a popcorn bucket kick as Park Guests are willing to wait HOURS in line to gather every type of popcorn bucket Disney can dish out! From the ever-so-popular Figment Popcorn Bucket that hit EPCOT to the recently released Mr. Toad’s Wild Ride Popcorn Bucket at Magic Kingdom (see video below!), Disney fans can’t seem to get enough.

RELATED: The Many Delicious Popcorn Options in Walt Disney World

We previously shared the exciting news that a MUSICAL popcorn bucket is making its way to Walt Disney World for the 2022 holiday season.

Available November 11 through January 1 (while supplies last), the Musical Holiday Tin Premium Bucket will be available at Hollywood Studios at Popcorn Kiosks near Hollywood Boulevard, Hyperion Theater, and Animation Courtyard.

The Musical Holiday Tin Premium Bucket will also be available at select locations at Disneyland Resort, as well as Walt Disney World’s Disney Springs and Disney’s Animal Kingdom. Check it out in the video below:

Now, the huge Toy Story franchise is joining in on the fun!

We first fell in love with Toy Story when the first movie debuted in 1995. Fans couldn’t get enough of Sheriff Woody, Buzz Lightyear, Slinky Dog, Mr. Potato Head, and more.

The franchise grew with more films, including Toy Story 2 (1999) with the introduction of Jessie and Bullseye, Toy Story 3 (2010) with the villainous Lots-o’-Huggin’ Bear, and again with Toy Story 4 (2019) with Bo Peep in a new light.

With the Toy Story fan following, it was brilliant of Walt Disney World Resort to add Toy Story Land within Disney’s Hollywood Studios, which opened in 2008 with new attractions, including Slinky Dog Dash roller coaster and Alien Swirling Saucers.

Now, the holidays look even brighter as Disney’s Hollywood Studios will welcome not only the musical holiday tin premium bucket but also a Toy Story Blocks Premium Bucket.

As you can see in the image above, the Toy Story Blocks Premium Bucket will feature best pals, Buzz Lightyear and Sheriff Woody. Buzz manages the Pixar ball at the top of the popcorn bucket while Woody takes a seat on the building blocks which say “Happy Holidays.”

The colorful Army Men and “Happy Holidays” lanyard that goes with the bucket is cute as well!

The bucket may be new to Walt Disney World Resort, but it was previously at Disneyland Resort for the 2021 holiday season.

It looks like it’s time to start planning that holiday getaway to Disney’s Hollywood Studios to snag a Toy Story popcorn bucket before they are gone. Happy holidays, Disney fans!

2022-11-07
Jamie Sylvester
Previous: One Guest Just Pulled Off the Ultimate Disney Cosplay
Next: Have You Tried These Underrated Walt Disney World Snacks?