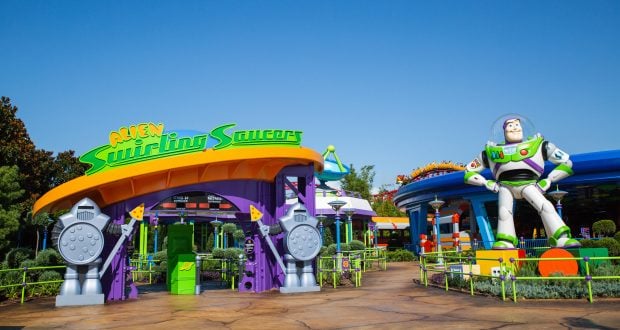 Toy Story Land in Walt Disney World’s Hollywood Studios is proving to be a hit with guests, for good reason!  People can’t get enough of the brilliantly colored, larger-than-life land where guests shrink to the size of toys.  One of the two new attractions in this playful new land is Alien Swirling Saucers, an intergalactic spinning ride that’s a ton of fun.  (For any guests who aren’t fans of spinning, there’s a viewing area where they can check out the action.)  Here are a few things we adore about this space-themed, family-friendly attraction.

The backstory for Alien Swirling Saucers?  The ride is part of a toy that Andy brought home from Pizza Planet, which, as a rider, you instantly become part of.  The endearing three-eyed aliens from Toy Story star as your pilots, and you won’t find any two with the same facial expression!  A miniature claw connects each alien spaceship with its ride vehicle, and if you look up, you’ll see The Claw itself hovering above you (just don’t hold your breath if you’re hoping to be picked by The Claw – it’s stationary). If you’ve been on the Mad Tea Party in the Magic Kingdom and think you have Alien Swirling Saucers all figured out, think again!  Unlike Mad Tea Party, you won’t be able to control your ride car on this attraction, and because of this, you’re completely at the mercy of the alien towing you.  And that alien has a few surprises up its sleeve!  Without warning throughout the ride, your alien driver will whip your spaceship from side to side (trying to dodge stray asteroids, maybe?) – just enough to keep you guessing.

6. Respite from the Weather

Walt Disney World fans are well acquainted with Florida’s hot, sunny days – and with its occasional downpours.  You’ll notice that much of Toy Story Land doesn’t offer a respite from the elements, but thankfully much of Alien Swirling Saucers’ queue is shaded, and protects riders from the worst of the sun and rain.  There are also water fountains and fans sprinkled throughout the queue.  So you can feel free to ride in (almost) any weather Orlando can throw at you!

While you won’t find interactive elements in the vibrantly-hued queue for Alien Swirling Saucers (those fun-looking control buttons you see on the wall are sadly just decorative), you can definitely hunt for Hidden Mickeys!  Check out the back wall of the queue, where sharp-eyed guests may be able to spot a button or two that are shaped like the head and ears of the famous mouse.

Imagineers have done everything they can to improve the flow of guests through the ride.  Because of the size of the attraction, it can accommodate two lines of riders that move through the ride simultaneously, one on each side.  This doubles the number of people that could otherwise move through the ride, shortening everyone’s wait time!  The capacity of each side of the ride is 11 pairs, or small groups, of riders (you’ll be able to seat between one and three people on a seat).  Keep in mind that despite the two sets of riders, you’ll still usually be looking at quite a line, at least until the novelty of Toy Story Land starts to wane!

Buzz Lightyear fans, take note!  There’s plenty of Buzz-related paraphernalia throughout the ride’s queue – starting with the larger-than-life Buzz that marks the entrance to Swirling Saucers, which is pretty hard to miss!  Keep your eyes peeled for Buzz’s trademark green and purple colors on the outdoor railings, and don’t miss Buzz’s oversized toy packaging and his massive laser blaster.  The queue is peppered with fun references to Buzz’s universe, so watch out for nods to Star Command and Zurg on the mural walls.

Think you’ve seen everything Alien Swirling Saucers has to offer?  Not unless you’ve ridden during the day and at night!  It’s worth a trip back to enjoy the attraction in all its lit-up glory once night falls – it really is a completely different ride in the dark!  Whenever you choose to ride, you’ll be treated to intergalactic new versions of beloved Toy Story songs, which help to set the out-of-this-world mood of the attraction.  The music was created just for this attraction, so you won’t hear it anywhere else. Walt Disney World’s Hollywood Studios has a ton of fantastic thrill rides, but it’s not so well known for family-friendly attractions.  Not until now, anyway!  Alien Swirling Saucers is the perfect ride for everyone in the family (unless you suffer from motion sickness when on spinning rides, in which you should probably give this one a pass).  It’s not as intense as Mad Tea Party, which can be a plus for younger guests, and it provides lots of bright colors and fun alien theming for the whole family to enjoy.