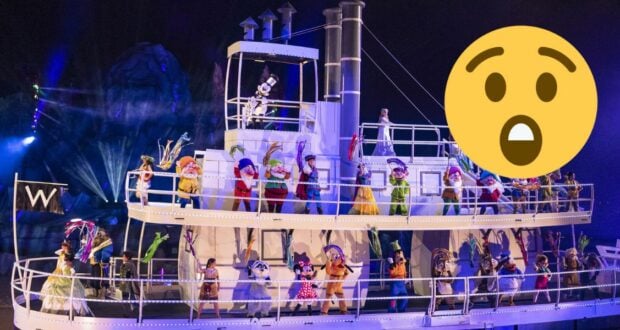 There is plenty of excitement in the air! Walt Disney World Resort is FINALLY welcoming the return of the beloved Disney Park experience we all know and love as “Fantasmic!” But would you be willing to wait in a 12-hour line for a seat?

RELATED: Guests who love “Fantasmic!” at Disney’s Hollywood Studios are in for a disappointment

Cast Members were invited to Disney’s Hollywood Studios on November 1, 2022, for a preview of the long-missing “Fantasmic!” nightly entertainment. The show closed with COVID-19 closures back in 2020 and has remained quiet since.

But it looks like the wait was worth it! Check out the video of the standing ovation for the first showing of Fantasmic in the tweet below:

While Disney announced the show would officially be open to the public on November 3, 2022, Disney did offer more Cast Members and media previews on November 2. Unfortunately, the show was cut short likely due to the weather conditions, as shared in the tweet below:

On the morning of Thursday, November 3, 2022, Disney fans went flocking to Disney’s Hollywood Studios. When the Park opened at 8:30 am, social media reports flooded in that Guests hurried down Sunset Boulevard to get in line for the first performance of “Fantasmic!”…. at 8:00 pm THAT EVENING!

While Disney management and Cast Members are encouraging Park Guests to leave the area, it looks like their attempts are not working.

@ThemeParkExpres took to social media to share a photo with the note, “Guests are currently being told to not form any sort of line for Fantasmic. They do not have an estimate of when guests will start being allowed to form a line. Fantasmic is standby only for the first few performances. No lightning lanes are being offered.”

Several comments are landing on social media, such as, “Y’all are crazy trying to line up for fantastic already go do something.”

Another says, “I don’t want to live in a world where people line up 12 hours in advance for WDW Fantasmic.”

Remember when Fantasmic! was open pre-COVID days? It was fairly normal to see a line form an hour or so before the show. One comment notes, “If I recall correctly, back in the day, people would line up almost 2 hours before fantastic started to get a good seat. Not y’all lining up at 9am for the 9pm showing. First culture is ANNOYING.”

It’s also good to note that Fantasmic! is offering two showings at 8:00 pm and 9:30 pm. And yes, while the “Fantasmic!” amphitheater will be a packed house for the first show, we do expect there to be room for all Disney Park Guests… if the Park Pass Reservation System works the way Disney’s CEO Bob Chapek says it should.

Currently, no Disney Genie+ or Lightning Lane options are available for Fantasmic. There is, however, a Fantasmic Dining Package which offers reserved seating when purchased.

Unlike pre-COVID days, Disney has yet to return another the other nightly performance at Disney’s Hollywood Studios which was a fireworks and projection display on the Chinese Theater. Star Wars: A Galactic Spectacular was a great way to divide the crowds as some would prioritize the nighttime spectacular over the Fantasmic show.

While we don’t expect a 12-hour line each night for Fantasmic!, we do expect the experience will retain its popularity for some time to come as Guests visit Disney’s Hollywood Studios for the holiday season and beyond.

Featuring stunning effects, thrilling stunts, dazzling pyrotechnics and rousing music, this larger-than-life show is painted on a grand canvas of dancing water and light. Overflowing with silly and suspenseful surprises, it will leave your entire family smiling from ear-to-ear!

Fast asleep, Mickey Mouse dreams that he is a mighty sorcerer’s apprentice with the power to control water, color and magic. The Disney Villains—including Maleficent in the form of a towering, 40-foot-tall dragon—turn Mickey’s dream into a nightmare, but don’t underestimate the power of Mickey’s imagination!

The fantastic fantasy includes Disney Characters from some of your favorite animated films:

Enjoy the show (but not the wait), Disney fans!