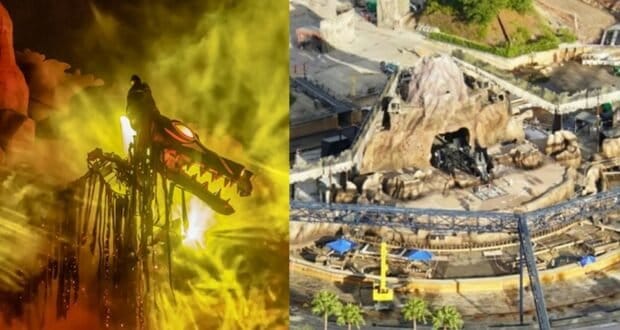 We previously shared the news that Walt Disney World’s Fantasmic looks like it is under refurbishment with aerial photos of the work happening behind the scene. Disney’s entertainment has been making a comeback since COVID-19 closure at Disney’s Hollywood Studios with the return of entertainment favorites such as Beauty and the Beast – Live on Stage now open and Indiana Jones Stunt Spectacular reopening later this year. Most recently, Disney’s Hollywood Studios welcomed back a projection show on the Chinese Theater called “Wonderful World of Animation“. In addition, Hollywood Studios has also announced “Disney Movie Magic” will be returning soon. Of course, amidst the excitement of the new nighttime spectacular at Magic Kingdom Park (Disney Enchantment) and EPCOT (Harmonious), Disney’s Hollywood Studios has yet to see the return of either of their two beloved pre-COVID nighttime experiences – Fantasmic! and Star Wars: A Galactic Spectualcar. We’re hoping the refurbishment currently taking place on Fantasmic is a step in the right direction for the show to reopen. And now, more aerial views have spotted Fantasmic’s Maleficent Dragon.

Aerial photographer, @bioreconstruct, has taken to Twiter to share photos of Fantasmic’s current refurbishment look from the skies. The photo below is an aerial overview of the refurbishment of the Fantasmic stage, which if you look closely you’ll stop the ship that carries all the Fantasmic Disney characters has been stripped to the frame.

@bioreconstruct takes us to the front side of the Fantasmic stage currently under refurbishment. Notice the Maleficent dragon used during the show in the center of the photo?

Here’s a close-up of the Fantasmic Maleficent dragon.

The photo above is Maleficent Dragon at WDW, check out the photo below for her impressive look at Disneyland with Sorcerer Mickey!

We’d love to see Disney World’s Maleficent get a similar upgrade like the Disneyland Maleficent dragon. Of course, at the moment, we just want the show back… so we’ll take whichever Maleficent we can get!

Walt Disney World describes Fantasmic as “A Legendary Tale: Featuring more than 50 live performers, massive sets, stunning effects, dazzling pyrotechnics, and rousing music, this larger-than-life show is painted on a grand canvas of dancing water and light like nothing you’ve ever seen. Overflowing with silly and suspenseful surprises, it will leave your entire family smiling from ear to ear!” “A Night When Dreams Come True: Fast asleep, Mickey Mouse dreams that he is a mighty sorcerer’s apprentice with the power to control water, color, and magic. The Disney Villains—including Maleficent in the form of a towering, 40-foot-tall dragon—turn Mickey’s dream into a nightmare, but don’t underestimate the power of Mickey’s imagination! The fantastic fantasy includes Disney Characters from some of your favorite animated classics: Beauty and the Beast, Sleeping Beauty, The Little Mermaid, Aladdin, The Lion King, Pocahontas, Snow White and the Seven Dwarfs.”

Do you think Disney is preparing for the return of Fantasmic at Disney’s Hollywood Studios? We hope so!