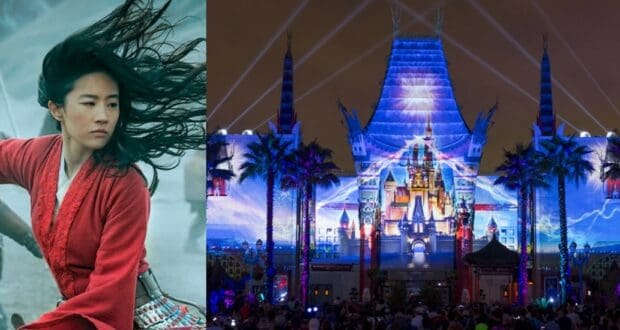 Theme Park entertainment is making a comeback at Walt Disney World! Magic Kingdom’s Casey’s Corner Pianist and “Let the Magic Begin” have returned. Over at EPCOT, Sergio and Matsuriza Drummers have returned. Even Disney’s Animal Kingdom is getting in on the action with the new “Disney Kitetails” daytime entertainment. Disney’s Hollywood Studios is no exception as they prepare to welcome back Indiana Jones Stunt Spectacular later this year. While we have yet to see the return of fireworks to Disney’s Hollywood Studios, we have enjoyed the return of the “Wonderful World of Animation” projection show which resumed this past summer. Now, we’ve learned another project show, “Disney Movie Magic”, will be making a return very soon at Disney’s Hollywood Studios – boasting a NEW sequence featuring Mulan!

The Walt Disney World website explains “Disney Movie Magic” at Hollywood Studios’ as a chance to “Relive the Magic”. “Fall in love all over again with unforgettable characters and cherished stories. After the sun sets, a compilation of favorites flickers across the iconic façade of Grauman’s Chinese Theatre at the Park. During this 10-minute treat, you’ll enjoy memorable scenes from Indiana Jones and the Pirates of the Caribbean series, plus many more. Be swept away all over again!” But wait… amidst the beloved Disney films, it looks like there is more coming for all those Mulan fans out there.

No showtimes are listed on Disney’s website or on the My Disney Experience App just yet for November 7, so be sure to keep an eye out for that update. Are you excited to see Mulan make it onto one of Disney’s Hollywood Studios projection shows? While we’re thrilled “Disney Movie Magic” is returning, we’re hoping the next step for the Disney Park is the return of Fantasmic and Star Wars: A Galactic Spectacular fireworks show!