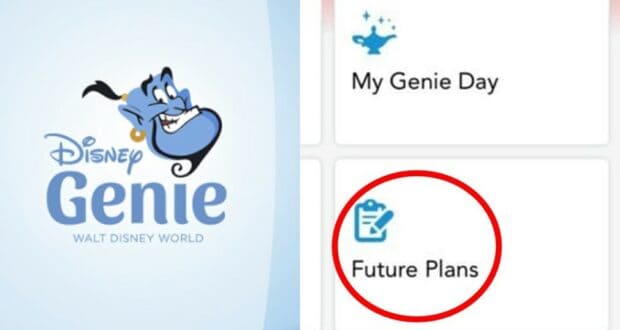 The Disney Genie service has arrived at Walt Disney World Resort as of October 19, 2021. While Disney Genie has yet to launch at Disneyland Resort, this week has been an interesting one to follow along with as Disney World Guests are exploring the good and bad of the new program within the Disney Park. When you’re ready to experience the new Disney Genie, the My Disney Experience App will ask you for an update. Once you do this, you’ll see the complimentary Disney Genie in the app, ready to optimize your Park day with suggestions on where to go next to avoid wait times, and much more. Of course, with anything new, there are a few hiccups to a new program.

While much of the focus has been on the upcharge Disney Genie+ (much like the former FastPass system) and the Lightning Lane a-la-carte attractions to purchase to skip the line, the complimentary Disney Genie itself is actually pretty impressive! One issue Guests quickly noticed however with the app update when Genie landed was the removal of the “My Plans” tab in the app. It looks like Disney has quickly worked to fix the issue!

We previously shared the news that there were a few glitches for day one of the Disney Genie rollouts. One noticeable change in the My Disney Experience App after the Genie update was that the popular “My Plans” tab was missing. The “My Plans” tab took Guests to their list of Disney Resort reservations, dining reservations, and Park pass selections. It’s a nice condensed list of your plans. When Disney Genie launched the “My Plans” tab disappeared but was able to be found if searching for “My Plans.” The extra step to find “My Plans” was odd for such a commonly used tab. Disney has now alleviated this issue by adding a “Future Plans” tab which takes Guests to the same screen as the former “My Plans” tab. Check out the screenshot below where you’ll spot “Future Plans” in the right column under “My Genie Day”:

RELATED: How To Purchase & Use Passes for Disney’s Eight Individual Lightning Lane Attractions

We love being able to find the former “My Plans”, now “My Future”, once again with ease. Thanks for the quick update, Disney! This means that Disney is definitely listening as they roll out this new Disney Genie system, working to make the process as helpful and painless for Disney fans as possible.