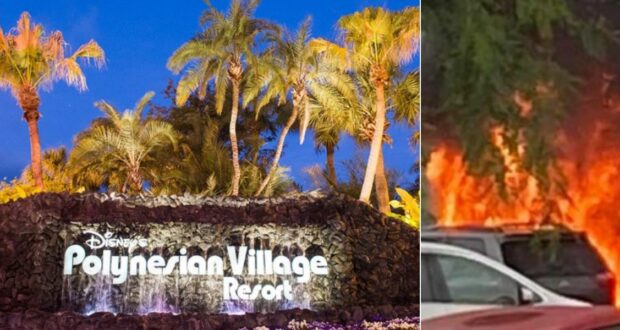 A vacation to Walt Disney World Resort took a turn for the worse for a family visiting Disney’s Polynesian Village Resort.

Disney fans are flocking to Walt Disney World for holiday experiences such as Mickey’s Very Mery Christmas Party at Magic Kingdom Park, the EPCOT International Festival of the Holidays, and the incredible holiday decor and treats at both Disney’s Hollywood Studios and Disney’s Animal Kingdom Park.

And while we like to think all will be well once within the Disney Resort bubble, unfortunately, incidents do occur.

From Magic Kingdom fireworks causing an attraction to catch fire to EPCOT’s Harmonious igniting nearby locations, the unexpected does happen.

On Saturday, November 26, 2022, during the heart of the Thanksgiving weekend, a mini-van located at the Deluxe Resort, Disney’s Polynesian Village Resort, caught fire and became engulfed by flames.

According to a report from Inside The Magic, “According to Kim K, a Guest who witnessed the incident, the fire started around 8 a.m. Saturday morning. The flames grew quite large, damaging four or five cars near it in the process. Eventually, Reedy Creek firefighters arrived on the scene and put the fire out.”

It is not clear what caused the vehicle to erupt in flames or if the owner of the vehicle was staying at Disney’s Polynesian Village Resort or simply visiting the Resort.

Thankfully, no one was were injured due to the unexpected fire.

Visiting and staying at Disney’s Polynesian Village Resort is an especially popular option during the holiday season with its stunning decor. With the Deluxe Resort located on the Magic Kingdom Resort Monorail, it’s a complimentary and easy way to travel to and from the Resort and Magic Kingdom Park.

We will share further details as we learn more about this incident at Disney’s Polynesian Village Resort.

2022-11-27
Jamie Sylvester
Previous: The Secret Way to Get ‘The Santa Clause’ Frappuccino at Starbucks
Next: Sudden Fire Causes Evacuation on Disney Cruise Line