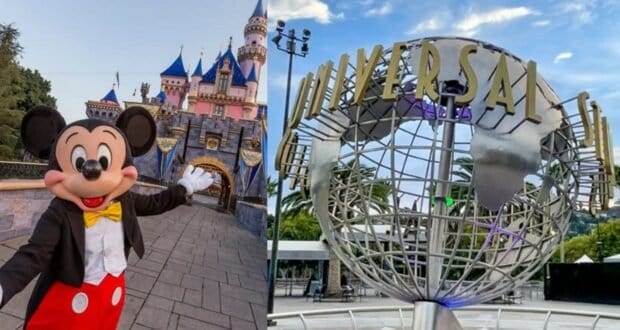 Disney’s Out Of Character Tweet About Universal Has Guests Surprised

Disney and Universal. Two giants in the Theme Park industry. To let you in on a little secret, we are Annual Passholders to both. But, hands down, sorry Universal, our hearts belong to Disney. That said, we can’t help but follow along with all things Universal… and a recent report is drawing our attention about the two Park giants’ prices being compared. While we’re used to Universal throwing shade in tweets at Disney, we (along with other Disney fans) are super surprised to see an out-of-character tweet coming from an official Disney Twitter account.

The OC Register recently reported that according to a new British-based travel news study, Universal Studios Hollywood costs Park-goers nearly 10 times more per ride than Disneyland. The article says according to the study, “Universal Studios Hollywood was named the most expensive Theme Park in the world while Disneyland was ranked the most affordable theme Park in California in a new international study that looks at the price of fun based on the average cost per amusement ride.” Of course, this report is nothing but great news for Disneyland… and they are obviously proud and confident enough in the report to share it via their official Twitter account.

The official Disneyland Resort Twitter account tweeted, “We are thrilled to continue our phased reopening and welcome Guests back to the Happiest Place on Earth with returning favorites, new experiences, and lasting magical memories. #MagicisHere” while including a tweet from O.C. Register that “Universal Studios Hollywood costs nearly 10 times more per ride than Disneyland, report says.”

Well, Disneyland Resort’s tweet doesn’t seem to be getting the response they were likely looking for from Twitter users. Instead, comments are surprised at Disney’s out-of-character tweet as throwing shade at Universal. @GratDisMemes responded with, “Did Bob Chapek, himself write this?”

@JJSingh tweeted, “Is this what it’s come to? Criticizing your competition? Wow. That’s SAD.”

@Attractions doesn’t need a comment… and instead provides a perfect gif of Ernie from Sesame Street looking disappointed as shown in the tweet below:

Another response from @JoleneGolightly says, “This quote tweet is in poor taste.” While the response to that comment has also been met with “Nah, it’s payback.”

What do you think? Was it time for Disney to strike back against Universal’s endless tweets throwing shade Disney’s way? Or should Disney stay away from the competitor’s banter?