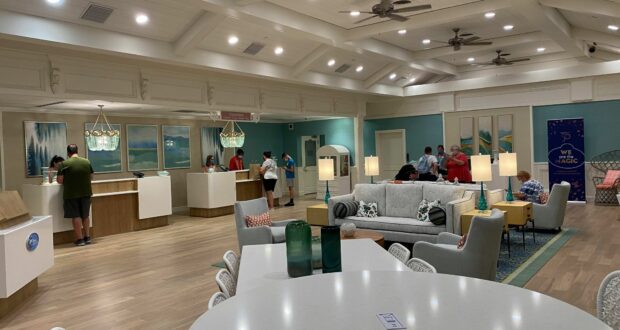 Welcome HOME, Disney fans! As a Disney Vacation Club Member, we must start by saying we are slightly biased in that we believe Disney’s Old Key West Resort is one of the best of the best resorts on Walt Disney World property. Not only did we make sure Disney’s Old Key West Resort is our home Disney Vacation Club Resort as DVC Members, but we make it the Disney Resort we bring family and friends to stay at that may be new to Walt Disney World. With that little slice of Old Key West right in the heart of Central Florida, it’s a perfect place to stroll around with flip-flops, enjoy time by the Sandcastle pool, and sip on a signature drink at Olivia’s Cafe known as the Turtle Crawl. Most recently, this beloved Disney Resort’s lobby received a makeover, so we decided to stop by and check it out.

For a beachy Old Key West feel, the lobby was somewhat dark and simple. Despite the look, we still felt like we were at home whenever we visited. Now, check out the new look in the photos below!

We’re loving the beachy blue and white ceilings plus all the extra lighting! The front desk area seems less bulky and much more welcoming for Guests.

The library space is still as wonderful as ever but now boasts a pop of color. And check out those adorable yellow chairs for the little ones!

RELATED: Ursula Takes Over A Disney Resort In The Most Impressive Way

The details! We’re in love with the details Disney put into the new space. From pillows to vases, to lamps and more – it has such a homey feel.

The new decor is fantastic, but you’ll still spot old favorites like the train models have stayed put!

And if you need a break and place to charge your phone, you’ll spot several charging stations available in select areas like the one pictured above in the center of the table.

The one negative our daughter actually pointed out, was the wall behind the front desk is missing the balloons. If you’ve ever checked into Disney’s Old Key West Resort with a child, it was very common for them to hand the child a balloon sword or hat as a special welcome. Our kids immediately asked what happened to the balloons?!

RELATED: Get Paid To Drive The Boat Around Disney’s Sassagoula River!

So, what do you think of the update made to the very first Disney Vacation Club Resort? We’re hearing some absolutely LOVE the change while a few wish it would never have changed. We personally love the new space and can’t get enough of it. Especially with Disney’s Old Key West being one of our home resorts, we’re thrilled to bring family and friends to this Deluxe Resort lobby for years to come.