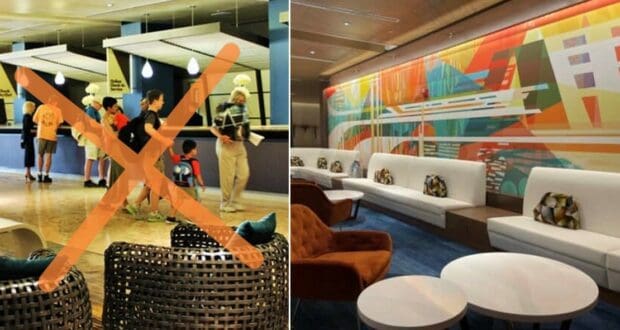 The transformation is complete, Disney fans! Disney’s Contemporary Resort lobby has been behind construction walls as Disney promised a new look in time for Walt Disney World Resort’s 50th Anniversary. Well, Disney has kept to its promise and has delivered a newly transformed Resort lobby that offers a colorful, yet still modern style to the space. Here’s a before photo below in case you forget what the Contemporary Resort lobby previously looked like.

Disney shared the news of the refurbishment with: “In the lobby, you’ll soon see a collection of modern art pieces as well as historical, behind-the-scenes photographs of Disney’s Contemporary Resort in development and under construction. The Resort’s lobby restaurant, The Wave… of American Flavors, will also soon close to make way for a reimagined dining experience in time for the Walt Disney World 50th anniversary celebration. And once the tower Guest rooms are complete, work will begin on the rooms inside the Garden Wing out on the shore of Bay Lake.” Check out the remodel below!

InsideTheMagic reports: “The first thing Guest will see when they walk in is a new mural, which also gives a nod to the one located on the third floor of the hotel. The mural extends throughout the Contemporary’s lobby, with new couches and furniture to match. Next to the check-in desk, Guests can also use the tables as a workstation or just as an area to lounge in. Off to the right, younger Guests can enjoy a Disney film while waiting for their parents to check-in.”

Of course, the Contemporary Resort dining spotlight always goes to Chef Mickey’s or even California Grill which boasts views of the Seven Seas Lagoon and Magic Kingdom… but a newbie is moving in that is stealing the show! We are going to miss The Wave, but are eagerly awaiting the opening of Steakhouse 71 which has taken over the former Wave restaurant location. Here’s a look at the former Wave entrance below, followed by the new look for Steakhouse 71.

Here’s a photo of the Disney Resort’s new entrance to the highly anticipated restaurant, Steakhouse 71. Reservations, menus, and pricing are now available for Disney’s new Steakhouse 71 as it prepares to open on October 1, 2021. Whether you’re staying at Disney’s Contemporary Resort, Disney Vacation Club’s Bay Lake Tower, walking over from Magic Kingdom Theme Park, or simply staying off property but want to try something new – Steakhouse 71 will be worth the visit!

Plus, we can’t forget to mention the newly refurbished Resort Hotel’s Incredibles-themed Guest rooms coming to Disney’s Contemporary Resort. Disney has announced, “Currently all nine floors of Guest rooms in the tower are being completely refurbished.” “These rooms will blend a sleek Monorail motif with some favorite characters from Pixar Animation Studios’ Incredibles films, including Jack-Jack, Frozone, and Edna Mode. New custom artwork in each Guest room and along Guest corridors will be modern, futuristic, and oh so stylish, dahling, complementing the Resort’s architecture while putting the Supers’ powers on display.”

What do you think of the changes? Anyone else super excited to enjoy a stay at Disney’s Contemporary Resort with the newly refurbished experiences? Happy planning your getaway to this nostalgic Deluxe Resort just steps away from Magic Kingdom Park!