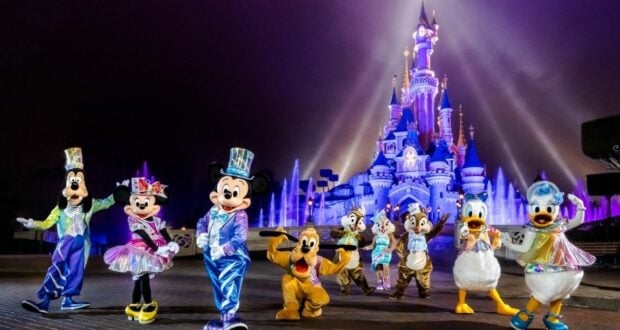 Disney has announced some spectacular news as they prepare to introduce Disney’s first-ever drone nighttime show coming to one of its Disney Parks! Check out the video and details below.

Walt Disney World Resort is in full 50th Anniversary celebration mode. The party started on October 1, 2021, and will continue for a full 18-months. The anniversary introduced us to new nighttime experiences such as Magic Kingdom’s “Disney Enchantment” and EPCOT’s “Harmonious“. And now, Disneyland Paris is taking their nighttime experience to the skies with a Disney Park first-ever drone show for its 30th Anniversary celebration.

Disneyland Paris’ 30th Anniversary begins on March 6, 2022, and will include brand new experiences such as a new daytime show, new Gardens of Wonder, the return of iconic shows, Avengers Campus opening this summer, and an exciting new state-of-the-art Sequence of Magic… with DRONES!

Disneyland Paris shared the big news with, “At nightfall, a new spectacular emotional moment will be offered for Guests before one of their favorite shows Disney Illuminations. Called Disney D-Light, this new pre-show will combine video projections, illuminated water jets, lighting effects, mist, famous Disney songs, and above all, drone choreography to bring an additional touch of Magic around the iconic Castle, that has been renovated for the occasion. Filled with special effects, the different scenes will transform the Castle as never before. The celebration of the 30th Anniversary of Disneyland Paris will begin on March 6, 2022.” Check out the video below!

RELATED: Take a Virtual Ride on the Phantom Manor at Disneyland Paris

200 drones, all creating stunning images in the Theme Park sky! We CANNOT wait to see this!

Is anyone else hopeful Walt Disney World Resort in Florida and Disneyland Resort in California will introduce this in the states? Let us know if you’d be interested in a nighttime drone show in the comments!

2022-01-25
Jamie Sylvester
Previous: “Empathy and Integrity”: Here’s how ‘a boy from Minnesota’ helped PIXAR survive its former chief’s scandal
Next: Cruising During COVID: Before You Board