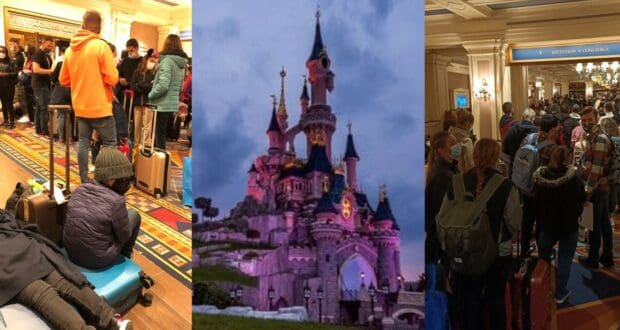 Last night was not a good night to be checking into a Disneyland Paris Resort Hotel. Apparently, Disneyland Paris Cast Members with housekeeping decided to go on strike, resulting in Disneyland Resort Guests being left without a Resort room to check in to. Twitter is loaded with Disneyland Paris news about the rough night, followed up with news of Cast Members picketing outside Disney’s Newport Bay Club Hotel this morning.

As shared via Twitter on October 10 by DisneylandParisGuest: “BREAKING: Due to a strike from the cleaning crews at DLP, there were no available rooms for Guests. Dozens of families are left for hours without a room. Kids are sleeping on the floor, the Resort management does NOTHING.” The tweet is followed by another tweet stating, “This is completely UNACCEPTABLE from any hotel. And definitely from this entertainment destination. The cleaning crews and lots of other CM’s are having a very hard time since and before the pandemic. Management is nowhere to be found.”

Mataclanes & Hijos shared to Twitter the evening of October 10: “This is the situation right now at “Newport hotel” in Disneyland Paris. There was a strike they didn’t tell us anything & they did nothing to relocate the customers. Shame on @DisneylandParis #Strike #Disney #Disneyland #DisneylandParis”

DLP Welcome blogger shared on Twitter: “Strike of cleaning employees against their working conditions.
Dozens of families waited to get their rooms. Some children slept on the floor. It is unacceptable that DLP, a premium Resort, continues to pass with so many subcontractors. Pictures: @charlytoys1″

Another Disney blogger SalonMickey took to Twitter the morning of October 11 to report: “Disneyland Paris Cast Members from the Housekeeping Department are currently taking industrial action and are picketing outside Disney’s Newport Bay Club Hotel. The strike is in relation to grievances about working conditions.”

Can you imagine arriving from the airport or drive in to expect Disney magic, but instead being left without a Disney hotel room to stay in? Disney officials have yet to release an update or response about the Disneyland Paris strike. We will keep you posted as we learn more of what’s to come out of France as this Disney Resort Cast Member strike continues.