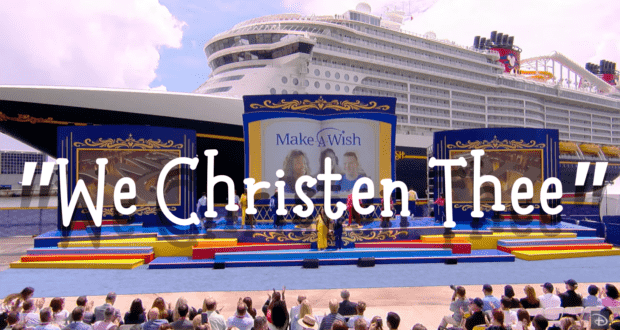 Disney Cruise Line‘s newest ship was christened on Wednesday, but that’s not the only part of the ceremony that had fans misty-eyed. 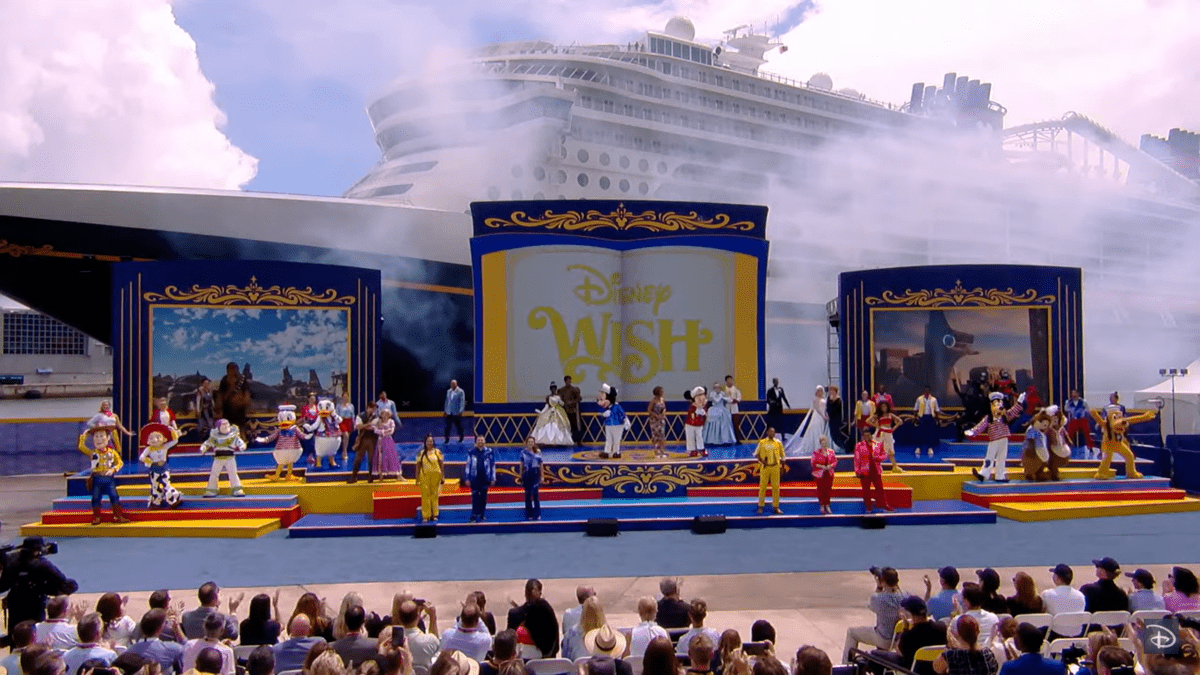 The christening ceremony for Disney Cruise Line‘s newest ship, the Disney Wish, was announced earlier this month, but in true Disney fashion, there were several surprises in store for those who gathered to witness the first christening of a Disney cruise ship since the Disney Fantasy was christening a decade ago.

During the ceremony, the traditional role usually given to the godmother of the cruise ship was instead entrusted to three children from the Make-A-Wish Foundation during the christening ceremony on Wednesday morning at Port Canaveral. 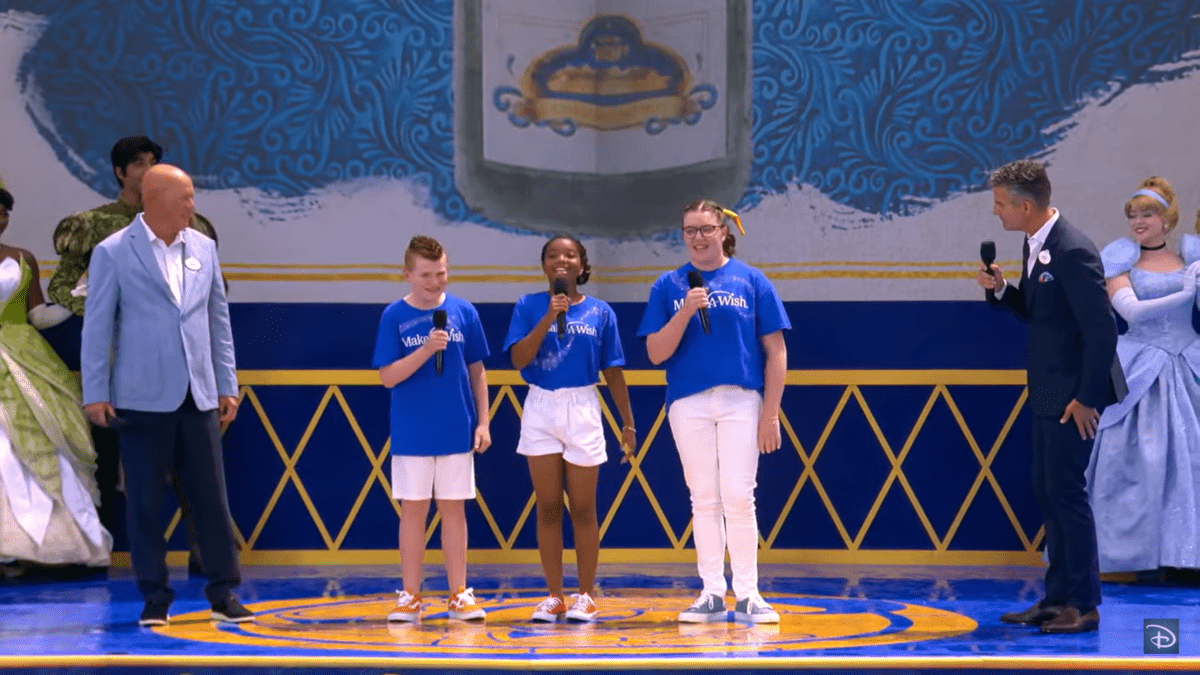 Thirteen-year-old Jenna from Sacramento, California, 16-year-old Megan from Brookfield, Wisconsin, and 10-year-old Colby from Lexington, Massachusetts, served as “representative godchildren of all past, present, and future recipients of the Make-A-Wish charity,” according to the Orlando Sentinel. All three children are survivors of life-threatening illnesses.

The trio of children had the honor of christening the newest member of the Disney Cruise Line fleet, declaring in unison, “I christen thee, Disney Wish. May God bless this ship and all who sail on her.”

As part of the christening ceremony, images were shown of Jenna, Megan, and Colby during their individual journeys during which they received treatment for their illnesses. One image even included a sign that read, “Cancer Free,” evoking an emotional response in many in the audience.

The partnership between The Walt Disney Company and the Make-A-Wish Foundation is a long-standing one. Over the years, the foundation has granted almost 150,000 wishes.

Try watching this video from Disney Parks and the Make-A-Wish Foundation with dry eyes:

Megan, the 16-year-old from Wisconsin who had a role in the christening of the Disney Wish and one of the Disney Wish godchildren, had a rare form of leukemia–one that affects only 2 people out of one million. Her wish was to meet a member of Walt Disney Imagineering, and her wish finally came true this week.

“You never know how strong you are until being strong is the only option,” Megan said. 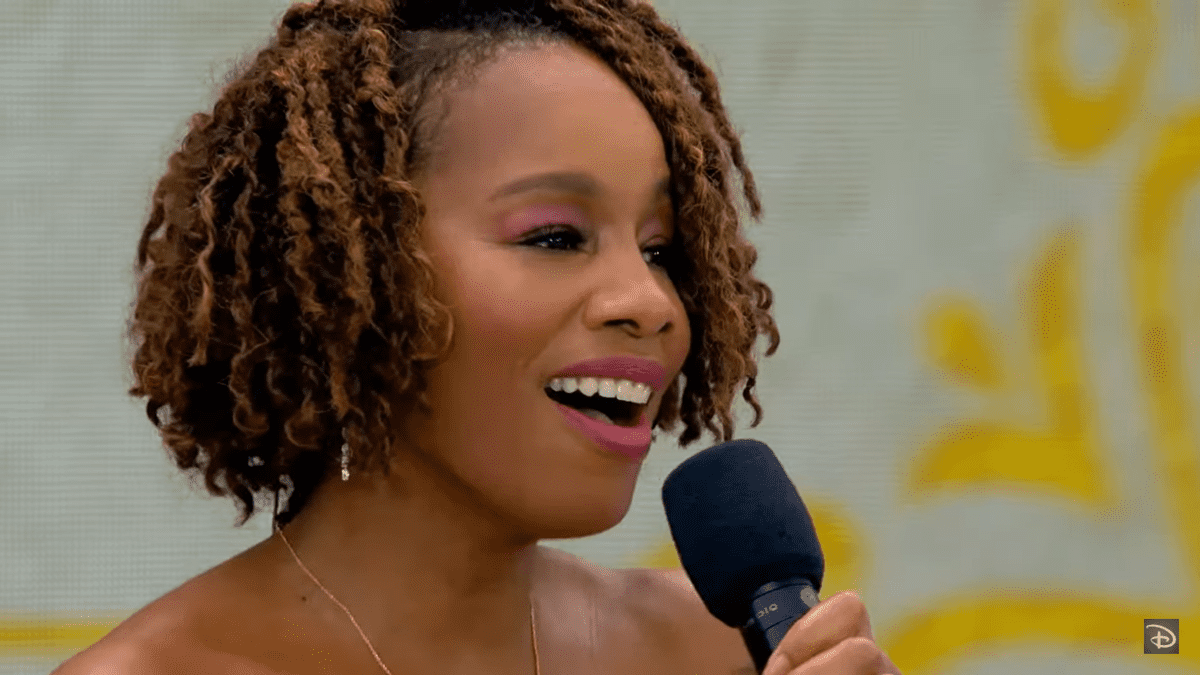 The Disney Wish christening event held at Port Canaveral also featured a vocal performance from Anika Noni Rose, who lent her voice to Tiana in Disney’s The Princess and the Frog. Walt Disney Company CEO Bob Chapek also spoke at the ceremony, as did Walt Disney Company Chairman of Parks, Experiences, and Products, Josh D’Amaro. 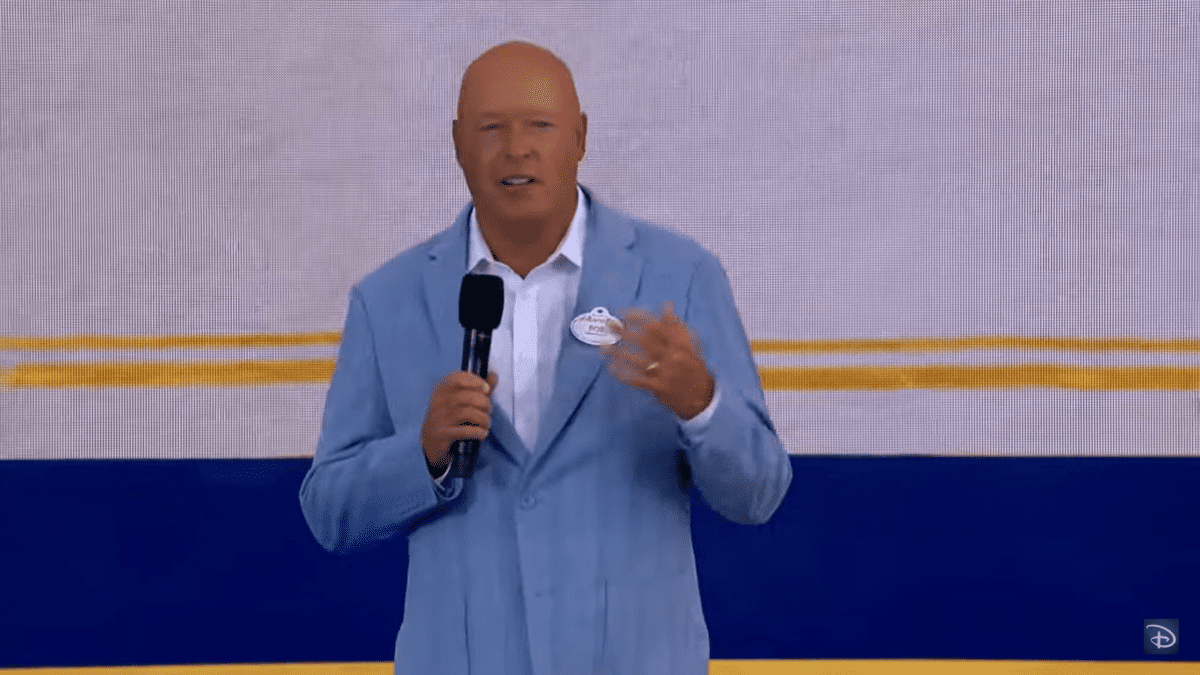 “This ship is a celebration of nearly 100 years of Disney storytelling excellence,” said Bob Chapek. “And it brings fantastic worlds and characters to life like never before. As you walk through the ship, you’ll notice around every corner is another amazing story. We’ve combined these amazing characters and stories with incredible technology to create brand-new experiences for our Guests that they can’t get anywhere else from bow to stern.”

Josh D’Amaro talked to the audience about the numbers of the Disney Wish, which has been in the works for almost six years. 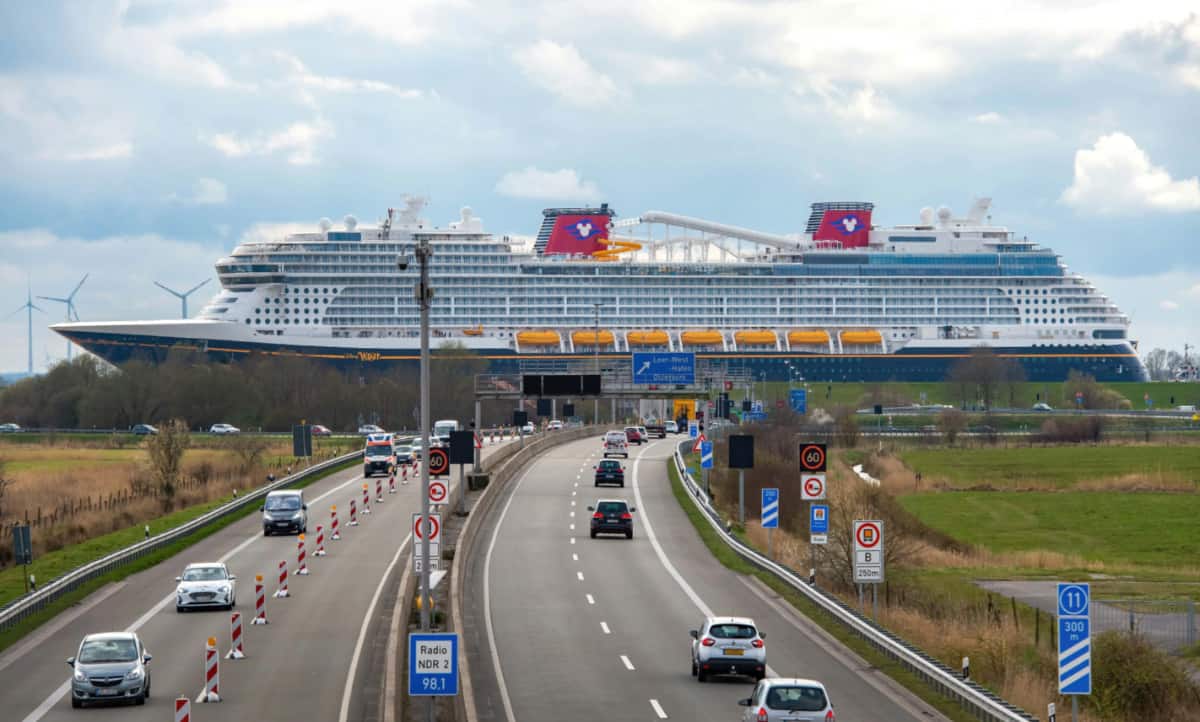 “It has been a labor of love, and our teams worked hard to get her here today,” D’Amaro said. “This incredible ship has 25 entertainment venues. It’s got more than 4,400 pieces of art onboard. It’s got 70,000 garments for cast and crew, and Rapunzel’s hair on the ship’s stern is 60 feet long. And in every detail, we are connecting people to our stories in fantastic new ways.” 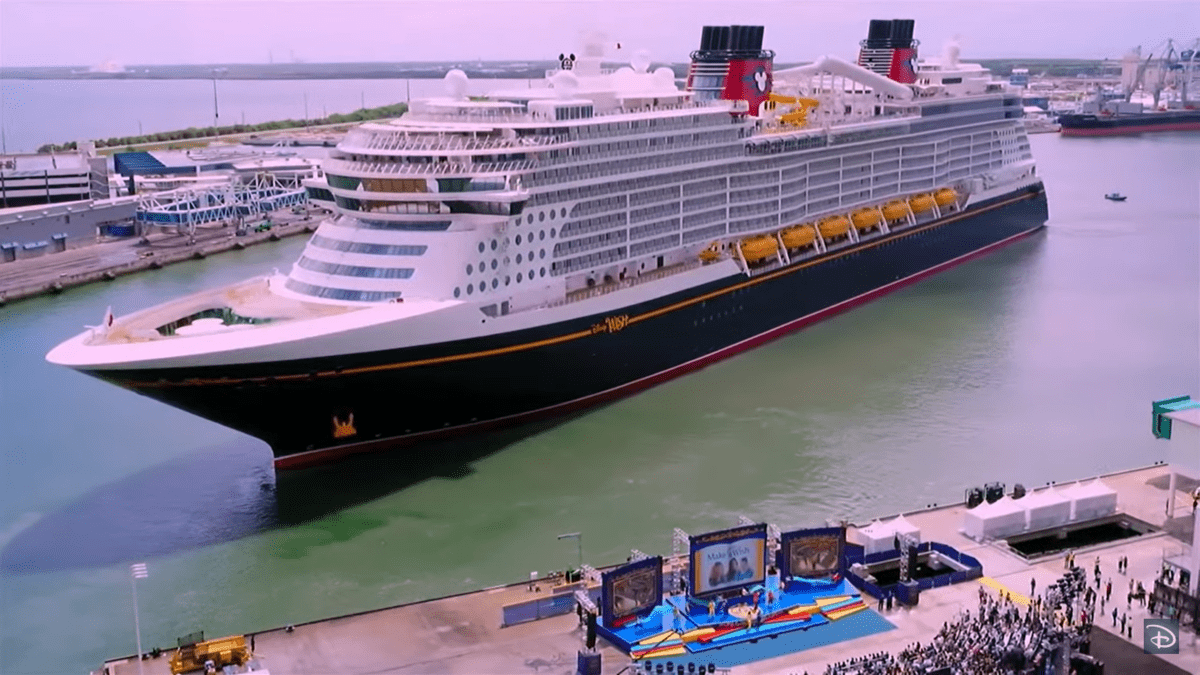 At 144,000 gross tonnes, the Disney Wish is much bigger than the Disney Dream and the Disney Fantasy, though she will accommodate roughly the same number of passengers as her sister ships.

The Disney Wish is the first of the Disney Cruise Line fleet to be LNG-powered. Liquefied natural gas is a fuel that burns cleaner. She’s only the second cruise ship in the industry to use LNG as fuel, after Carnival Cruise Line’s Mardi Gras. She’s also the first construction in Disney’s Titan class of ships.

The maiden voyage, or inaugural sailing, of the Disney Wish is scheduled for July 14.