Disney Said They May Cut Portions, Have They Already Started?

Back in November, Disney executives held their Quarter 4 earnings call and spoke about everything that was happening with the company — from Disney+ subscription numbers, to how the Parks were rebounding from the pandemic and how profits overall were looking. Disney’s CFO, Christine McCarthy, also spoke about how the company was continuing to look at ways to cut costs.

McCarthy stated that the company would consider things like changing vendors and cutting portions, which led to a very divisive statement about how that move would be beneficial for some Guests’ waistlines. While McCarthy said that the company was not yet cutting portions, and it was just an option they were exploring, some Guests believe that Disney has indeed started to sell smaller portions for the same, often high price tag. 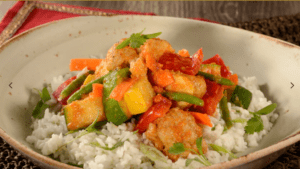 Redditor chemg11 recently shared to a Disney Parks thread a pasta and meatball dinner that they purchased at a quick-service location at Disney’s Pop Century Resort. The posted meal looked like a very small serving of pasta with three meatballs and a breadstick, but the biggest issue seemed to be with the sauce, which was almost non-existent. While Disney is known to charge a little more for its meals, the $12 price tag did not seem to come close to what they should have charged for the dish.

This was $12. They don’t believe in sauce apparently. from disneyparks

The food serving sizes didn’t stop there. Disneyforfoodies recently shared a video on TikTok that compared the french fries that they recently got at Mr. Kamal’s Seasoned Fries in Animal Kingdom Park at Walt Disney World to the same order of fries that they got in October and the results were surprising and disappointing. The October order showed a generous serving of fries with sauce, but the recent order showed a container that was barely half full.

While Disney has not confirmed that they are indeed cutting portions, these examples seem to indicate that they have started. Unfortunately, those smaller portions do not come with smaller price tags. The smaller portions also come as Disney cut its free FastPass system and implemented a paid-for system at both Disneyland and Walt Disney World Resort.

Do you think that Disney has already started cutting portion sizes in the Parks?

2021-12-13
Krysten Swensen
Previous: Only 10,000 available: Disney’s 50th anniversary Cinderella Doll might just turn you into a doll collector–bibbidi bobbidi boo!
Next: CookieAnn Just Got Her Very Own Bakery at One Disney Park!