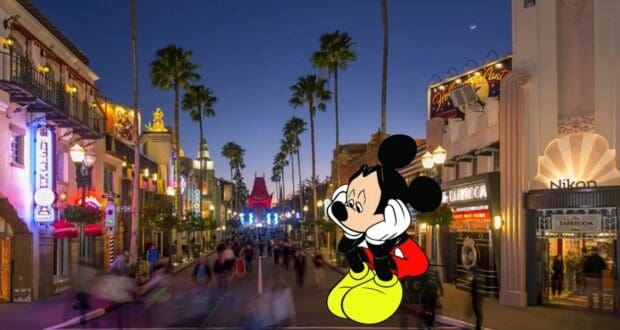 This Disney’s Hollywood Studios Experience May Be Gone for Good

The big day has finally arrived! Walt Disney World Resort has welcomed the return of the beloved “Fantasmic!” nighttime entertainment at Disney’s Hollywood Studios. But there’s still something missing.

“Fantasmic!” offers that perfect dose of classic Sorcerer Mickey with modern Disney Princesses, characters, and, of course, Disney villains! Before the COVID-19 pandemic closures, Guests would flock to the Sunset Boulevard amphitheater for the nightly show.

But “Fantasmic!” isn’t for everyone. While its popularity can’t be ignored, Disney’s Hollywood Studios used to offer a stunning nighttime spectacular with fireworks and projections in pre-COVID days that was a perfect alternative to fighting the crowds for “Fantasmic!”

Each night, the Chinese Theater at the end of Hollywood Boulevard would light up with projections, lasers, fireworks, and incredible music for Star Wars: A Galactic Spectacular. The nightly fireworks were perfect for Disney’s Hollywood Studios, as they beautifully tied in the Star Wars environment.

It only makes sense to offer an extra dose of Star Wars entertainment outside of the usual character meet-and-greet options with Darth Vader, Chewbacca, and BB-8 in Star Wars Launch Bay.

RELATED: James Earl Jones Officially Retires as Darth Vader – What Comes Next for the Character

PLUS – Walt Disney World Resort just opened its luxury style, storytelling Resort Hotel experience called Star Wars: Galactic Starcruiser. You’d think with this high-priced Resort transporting Guests to and from Disney’s Hollywood Studios and the hotel, there would be a nighttime offering for Star Wars fans.

Sadly, the full Star Wars: A Galactic Spectacular nighttime fireworks page has been removed from Disney’s website. Does this mean this Disney entertainment is gone for good? There is still some hope.

While the page has been taken down, Disney does still list Star Wars: A Galactic Spectacular on its lineup of entertainment offerings.

RELATED: Darth Vader Dances to “You Can’t Touch This”

That said… the website also lists Jedi Training: Trials of the Temple, which also hasn’t returned since COVID closures in March 2020.

Magic Kingdom currently presents “Disney Enchantment,” with news of “Happily Ever After” returning soon. Over at EPCOT, “Harmonious” is in full swing but will end as well with the rumored return of “EPCOT Forever.” While fireworks are not allowed for the animals’ sake at Disney’s Animal Kingdom, the “Tree of Life Awakenings” has returned.

So… is there more coming for Disney’s Hollywood Studios?

The Disney Park has the perfect audience to return Star Wars: A Galactic Spectacular. Not only would it help alleviate the crowds for “Fantasmic!,” but it’s a Star Wars Park favorite that is greatly missed.