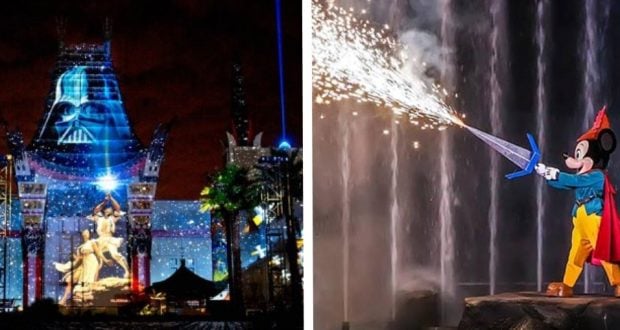 Disney’s Hollywood Studios is home to not one, but two incredible end of the night experiences. The problem is that they are in different parts of the park. The entrance for Fantasmic! is on Sunset Boulevard, just before Tower of Terror. The best viewing areas for Star Wars: A Galactic Spectacular are on Hollywood Boulevard. That leads to the question, is it possible to do both in one night? First, a brief description of each.

Star Wars: A Galactic Spectacular is often referred to as a fireworks show, but there is a lot more to it than that. It is also a projections show that takes place on Grauman’s Chinese Theater and the surrounding buildings. Scenes from all of the Star Wars films including Solo: A Star Wars Story come alive all around you. There are lasers and, yes, plenty of fireworks. John Williams’ classic score plays throughout, and the ending is incredible, especially if the night is clear. It lasts approximately 14 minutes. Fantasmic! is pure Disney. It’s a classic show that features both live and animated characters. Scenes from movies are shown on water screens that will cause you to scratch your head and wonder how they do it. There is fire and there are laser effects. Mickey is the star, it is a trip into his nightmare. If you’re a fan of Disney villains you will have a blast, because at times they seem to be taking over. Of course Mickey comes out on top at the end; literally. The running time is 30 minutes. Most of the time it is extremely hard to be able to see both in full on one night. If possible, try to visit Disney’s Hollywood Studios on two separate evenings. If that isn’t in your plans, you might have a problem.

If you’re visiting during peak season, you could be in luck. On some of the busiest days of the year there will be two showings of Fantasmic! Often they will be held at 9:00 and 10:30, while Star Wars: A Galactic Spectacular will take place at 10:00. If this is the case, your best bet could be to go to the first showing of Fantasmic! then leave immediately. At 9:30 on a busy day Hollywood Boulevard will be packed with people who have already claimed a spot, but you should still be able to find something.

Your other choice when there are two Fantasmic! shows is to get FastPass+ for the second show, and watch Star Wars: A Galactic Spectacular first. Find a spot that is on your right when you’re facing Grauman’s Chinese Theater so that you’ll be able to easily head in the right direction. The closer you are to Sunset Boulevard, the better. If possible, stand somewhere near Trolley Car Cafe because you’ll then be in a good position to hustle. You’ll still need to hurry, because it’s a long walk from the Fantasmic! entrance on Sunset Boulevard to the actual theater.

If there is only one showing of Fantasmic! it’s going to be a lot harder. If you want to be able to experience both, you’ll have to leave Fantasmic! early. Sit as far back in the theater as you can, and try to sit on an end if possible. Make sure that you sit where you can easily get to the exit. Keep an eye on the time, because you will want to leave about ten minutes before the show ends. Don’t stay for the whole thing, because you’ll then get stuck in the crowd when it’s over and you’ll never make it to Hollywood Boulevard on time. Sneak out, trying to not disturb those who are staying. Then hurry to Hollywood Boulevard. Star Wars: A Galactic Spectacular might have already started by the time you get there (again, it’s a long walk from the Hollywood Hills Theater to Sunset Boulevard) but the show gets better as it goes along so you will still see most of the good stuff. When you get back to your hotel, look for a full video of Fantasmic! online, because you will have left in the middle of Mickey’s nightmare and you don’t want to leave him trapped in there.

Again, if it is at all possible, end two nights at Disney’s Hollywood Studios so that you can experience both shows. You will save yourself a lot of stress that way, even on nights when there are two Fantasmic! shows. If you do try to do both in one night, study the map, and even  walk the path that you’ll need to take once you’re in the park. If you know the way, it will be easier once you’re rushing from one spot to the next. Of course, all this could change if Disney decides to change the time patterns for the shows. If there is a couple of hours in between them, it would be easier to do both.

2018-06-24
PaulaK
Previous: 9 Things Disneyland Has That We Wish Was Also Available At Walt Disney World
Next: Upcoming Disney Projects From Around The World