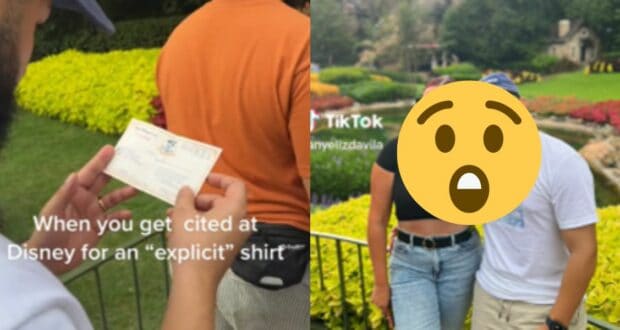 A Disney Park Guest was recently attending the popular EPCOT International Food and Wine Festival when he was dress coded for wearing an “explicit” shirt in the family-friendly Disney theme park.

Disney fans may remember the viral TikTok hack for a free shirt which included Guests wearing attire such as inappropriate clothing and raunchy shirts to receive a voucher to a Disney gift shop for a free shirt.

Disney seemed to catch on quickly to the free shirt hack and began asking the person in violation of the dress code to either leave the Disney Park or purchase a shirt on their own.

It seems like in one recent incident, a Disney Cast Member reverted back to offering a free shirt for a Guest wearing an explicit shirt deemed inappropriate by Disney Park dress code standards.

@anyelizdavila took to social media on November 11, 2022, to share a now-viral video with over 2.3 million views, noting, “When you get cited at Disney for an “explicit” shirt.”

RELATED: Guest Claims Disney Body Shamed Her When They Dress-Coded Her

The comments to the video clarify that it doesn’t look like the Guest is being “cited” by a Cast Member but rather being given a dress code violation voucher.

You can see in the video above the face of Pinocchio on the card the man is holding, which is known as a “no string attached” voucher. Guests given this voucher by a Cast Member can take it to a Disney Park store and get a new shirt for being dress coded.

A follow-up video is posted showing a photo of the explicit shirt. The couple looks like they are standing in front of the Canada Pavilion gardens at EPCOT:

The shirt is of a woman lying on what looks like a pool raft with little to no coverage.

With children in mind, Disney’s dress code clearly states, “Clothing with objectionable material, including obscene language or graphics” is not permitted.

Does this mean the “free shirt hack” is back when wearing an obscene shirt? Or was this just a one-time incident that Disney let slip through the cracks? Only time will tell.

2022-12-13
Jamie Sylvester
Previous: Dove Cameron Recalls Advice From Selena Gomez That “Made All the Difference” in Her Career
Next: What’s Growing on the Ceiling of This Iconic Magic Kingdom Attraction?